China’s heaviest satellite – and also its most advanced – has successfully entered into a geosynchronous orbit around Earth.

Geosynchrous orbit is more than 22,000 miles above Earth and allows satellites to stay over the same part of the planet at all times, allowing for 24/7 communication.

The Shijian-20 satellite reached its far-away spot on Sunday and is the first verification satellite for the Dongfanghong-5 (DFH-5) satellite platform.

It launched on December 27 atop the Long March 5 Y3 rocket, which has accrued the title of the world’s most powerful rocket by Chinese media.

It will eventually have a wide range of purposes, including communications, remote sensing and scientific experiments, according to the Chinese space agency.

The satellite, and its complex platform, is expected to be used for future missions to the moon and beyond, including a planned trip to Mars in 2020. 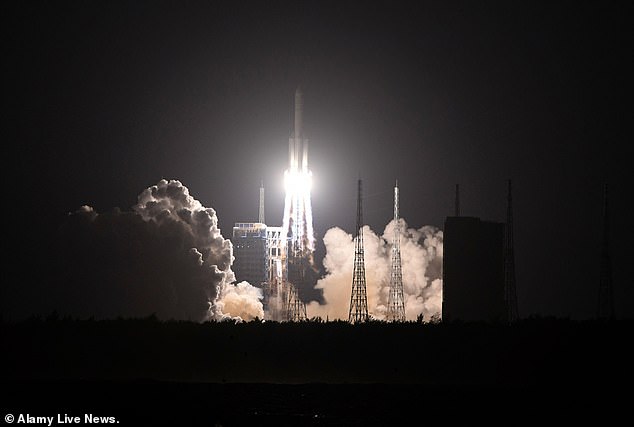 China’s heaviest satellite has successfully enters into a geosynchrous orbit around Earth, a huge step for the country’s space programme. Geosynchrous orbit is more than 22,000 miles above Earth

WHAT IS A GEOSYNCHROUS ORBIT?

A geosynchronous orbit is a high Earth orbit that allows satellites to match Earth’s rotation.

Satellites in a geosynchrous orbit are more than 22,000 miles (35,000km) above Earth – considerably higher than most satellites.

Their extreme vantage points affords them the ability to monitor weather, communications and surveillance equipment

it is especially useful for monitoring a single location for a long period of time as it matches Earth’ spin.

This means over months and years, the satellite will be scrutinising the same region relentlessly.

The satellite is being hailed as China’s most advanced craft yet by state-run media and weighs a reported eight metric tonnes.

The Shijian-20 satellite, which translates as ‘Practice’, is designed to be a high-throughput communications satellite ‘capable of delivering 1 Tbps bandwidth for ultrafast speeds,’ Chinese space officials said according to the state-run Xinhua news agency.

It is also believed the satellite will test out a new laser communications system for future missions and ion thruster technology.

Zhou Zhicheng, chief engineer of the DFH-5 satellite platform, says it is far superior to its predecessors, the DFH-3 and 4.

It is claimed it has improved in weight, power and in-orbit lifespan, which will serve the needs of high-capacity satellites in the next 20 years,

The success of the Long March 5 launch gets the Chinese space programme back on track after a previous attempt in July 2017 failed mid-launch.

It was a test of ‘key technologies related to future space missions’, according to the China’s National Space Administration.

‘It will be tasked with a series of key missions including launching China’s first Mars probe, the Chang’e-5 lunar probe and a core module for the manned space station.’

WHAT IS THE FUTURE OF CHINESE SPACE EXPLORATION?

Officials from the Chinese space agency have said the country will return to the moon by the end of 2019 with the Chang’e-5 mission.

This will collect rocks from the near side of the moon and return them to Earth for further study.

Chang’e-6 will be the first mission to explore the south pole of the moon.

Chang’e-7 will study the land surface, composition, space environment in a comprehensive mission, it was claimed, while Chang’e-8 will focus on technical surface analysis.

Mission number eight will likely lay the groundwork for this as it strives to verify the technology earmarked for the project and if it is viable as a scientific base.