The United States now has company on Mars.

A Chinese spacecraft descended through the thin Martian atmosphere and landed safely on a large plain on Saturday morning, state media reported, accomplishing a feat that only two other nations had before. (In the United States, it was still Friday — 7:18 p.m. Eastern time — when the spacecraft touched down.)

The landing follows China’s launch last month of the core module of a new orbiting space station, as well as a successful mission in December that collected nearly four pounds of rocks and soil from the moon and brought it to Earth. Next month, the country plans to send three astronauts into space, inaugurating what could become a regular Chinese presence in Earth’s orbit.

Just by arriving at Mars and orbiting it in February, China’s space program confirmed its place among the top tier of agencies exploring the solar system. Now that it has executed a landing — with the deployment of a rover still to come — it has established itself as a principal contender in what some view as a new era of space competition.

“China’s successful Mars landing demonstrates to the world that there is another country with advanced interplanetary space capacities,” said Namrata Goswami, an independent analyst and co-author of a new book on space exploration, “Scramble for the Skies.”

Thomas Zurbuchen, NASA’s associate administrator for science, offered his congratulations to China. “Together with the global science community, I look forward to the important contributions this mission will make to humanity’s understanding of the Red Planet,” he wrote on Twitter.

Until Friday, the China National Space Administration had said little about its plans for the landing, in keeping with its usual secrecy involving operations. The news of the impending landing, however, began to spill out on social media and in official news reports, signaling that it was imminent.

China’s state television did not report on the landing live, but later devoted hours of programs to the mission. The country’s leader, Xi Jinping, issued a message to the space agency’s scientists and officials hailing the achievement.

“This is another milestone advance in our country’s aerospace endeavors,” he said. “You have had the courage for challenge, have strove for excellence and have brought our country to the global forefront of interplanetary exploration.”

What is China’s mission to Mars?

The Tianwen-1 mission launched from Earth last July, aiming to take advantage of the window of time every two years when Mars and Earth are closest together during their voyages around the sun.

The mission consists of an orbiter, a lander and a rover.

China’s mission to Mars features a probe that will land on the planet with help from a parachute.

A parachute attached to a protective SHELL will slow the lander’s descent. Next, a set of STRUTS will deploy midair. Once on the surface, a RAMP will slide out so the rover can drive off.

A parachute attached to a protective SHELL will slow the descent. Next, a set of STRUTS will deploy midair. After landing, a RAMP will slide out so the rover can drive off.

A parachute attached to the SHELL will slow the descent. Next, four STRUTS will deploy midair. After landing, a RAMP will slide out so the rover can drive off.

The Tianwen-1 orbiter pulled into Martian orbit on Feb. 10; since then, it has been circling at a safe distance, preparing for the landing attempt.

The unnamed landing craft carries a rover, which was named Zhurong, after a god of fire in Chinese folk tales. That name beat out nine other semifinalists that were announced in February.

The mass of Zhurong is about 240 kilograms, or roughly 530 pounds. That is a bit heftier than the Spirit and Opportunity rovers that NASA landed on Mars in 2004, but only about one-fourth the mass of the two currently operating NASA Mars rovers, Curiosity and Perseverance.

Days after the touchdown, the rover will roll off the lander. Like Spirit and Opportunity, Zhurong will be powered by solar panels, which are retractable so that it can periodically shake off any accumulated dust. For Perseverance and Curiosity, nuclear batteries turn heat released by the decay of radioactive plutonium into electricity.

This was not China’s first attempt at a Mars mission. That was Yinghuo-1, which failed nearly 10 years ago, through no fault of the country’s own. That spacecraft burned up in Earth’s atmosphere when the Russian rocket that was carrying it failed in flight.

Where did the rover land and what will it study?

It landed in Utopia Planitia, or Nowhere Land Plain, a huge basin a couple of thousand miles wide in the northern hemisphere that was most likely carved out by a meteor impact. The same region was visited by NASA’s Viking 2 lander in 1976.

The plains are part of the northern lowlands of Mars. If there was once bountiful water on the red planet a few billion years ago, this region could have been underwater, part of an ocean covering the upper part of the planet. Utopia Planitia lies lower than features that have been proposed as two sets of shorelines, remnants from such early Martian oceans.

Some of the water from that hypothesized ocean may once have percolated underground and could still be frozen there today. In 2016, scientists using a radar instrument on NASA’s Mars Reconnaissance Orbiter concluded that there is indeed much ice there — as much water as Lake Superior spread over an area bigger than New Mexico.

One goal of the Tianwen-1 mission is to better understand the distribution of ice in the region, which future human colonists on Mars could use to sustain themselves.

The Chinese space agency has highlighted the international collaboration on the Tianwen-1 mission, including contributions from the European Space Agency, Argentina, France and Austria.

How did the rover land on Mars? 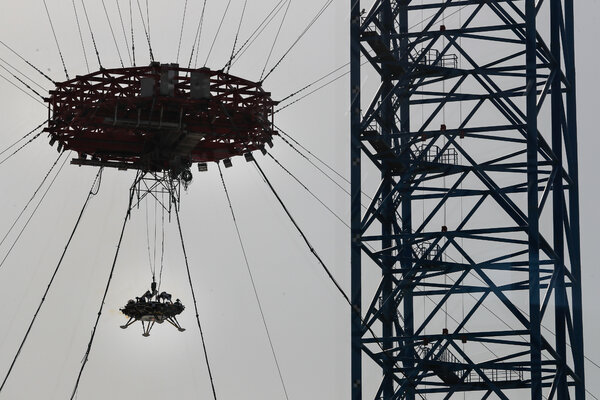 Landing on the red planet is perilous — NASA engineers refer to it as seven minutes of terror when its rovers, most recently Perseverance, arrive.

Because Tianwen-1 was already in orbit around Mars, its incoming speed was not quite as fast as Perseverance’s. Thus, China’s lander required a bit of extra terror — nine minutes — for the landing, Global Times, a newspaper controlled by the Chinese Communist Party, reported on Friday, citing experts. The probe was also operating on its own, as signals currently take 17 minutes 42 seconds to travel between Mars and Earth.

Spacecraft descend toward Mars at a high speed, and the thin atmosphere does not do enough to slow the trip to the ground. The shock waves of air compressed by the speeding capsule generate extreme heat that must be absorbed or dissipated. A number of Soviet, NASA and European missions have crashed.

Only NASA has reached the surface of Mars intact more than once. The landings of its largest rovers, Curiosity and Perseverance, have relied on parachutes to slow the spacecraft, shields to dissipate the heat from atmospheric friction and intricate systems called sky cranes. These were basically rocket-powered jetpacks, which carried the rovers beneath them and lowered them to the surface on cables before flying safely away from the landing zone.

“For our country’s first Mars exploration mission, we didn’t have firsthand data about the environment on Mars, especially the atmosphere,” Chen Baichao, a senior designer for the mission, said in remarks reported by The Paper, a Shanghai-based news site. “So it was tantamount to us entering a completely unknown environment, and you can imagine how difficult that is.”

Global Times reported that the Tianwen-1 probe lowered its altitude from its parking orbit before its lander-rover combination separated with the orbiter at around 4 p.m. Friday, Eastern time. (In China, it was 4 a.m. Saturday.)

The orbiter then rose and returned to its parking orbit about half an hour after the separation, to provide relay communication for the landing craft combo, the Chinese space agency told Global Times. The lander-rover combination circled Mars for another three hours before entering the Mars atmosphere en route to landing.

For the Tianwen mission, a cone-shaped entry capsule carried the lander and rover through the atmosphere. A heat shield protected the spacecraft from superheated gases as it sped through the top of the atmosphere. Then the friction of the thin Martian air helped it slow down — by about 90 percent, Tan Zhiyun, a designer at the China Academy of Space Technology, told Global Times.

At a lower altitude, the heat shield was jettisoned. At the next step, the parachute and the top nose-shaped piece were discarded. Firing a rocket engine, the four-legged lander, similar in design to the Chang’e-3 and Chang’e-4 lunar landers, then hovered briefly as it searched for a safe spot and descended toward a safe powered landing.

What else has China’s space program been doing?

China is on the far side of the moon with a robotic rover, and it recently put a large piece of its next space station in Earth orbit. But its space program has many other goals, too. Read more about China’s space exploration plans here:

What else has been happening on Mars recently?

In recent weeks, the surface of Mars has seen its first flights by Ingenuity, an experimental helicopter built by NASA. The small rotorcraft was meant to demonstrate that it was possible for something to fly like a helicopter or airplane in the thin Martian atmosphere. 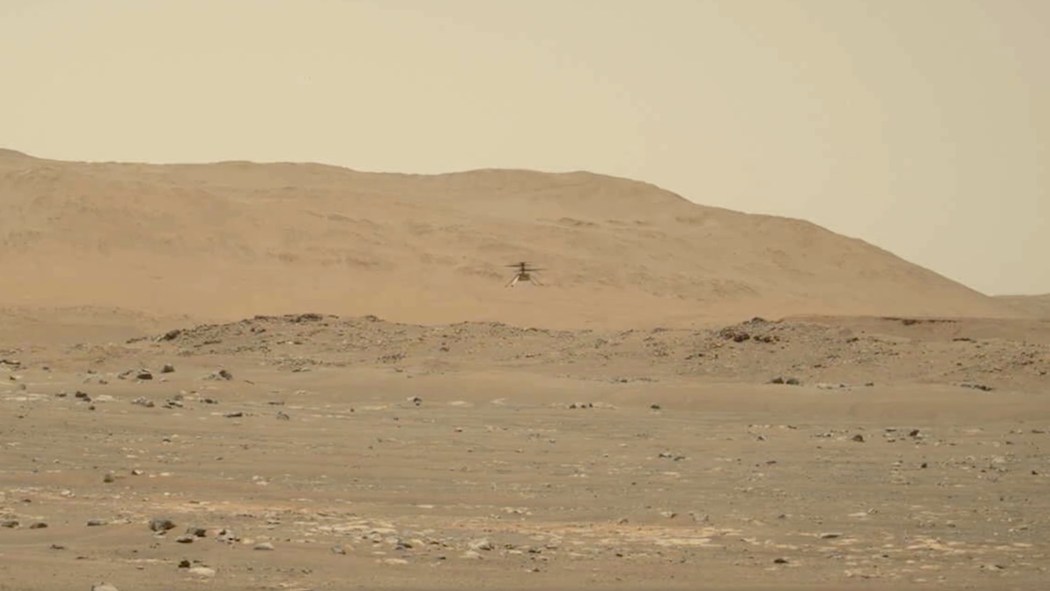 So far, the mission has been a great success. The first flight, on April 19, hovered at an altitude of some 10 feet for about 30 seconds. Subsequent attempts have been more ambitious, with the fifth flight making a one-way trip across 423 feet at a higher altitude. From the new location, Ingenuity will begin a secondary mission of serving as something like an aerial scout for NASA’s Perseverance rover.

NASA and China were actually beat to Mars this year by Hope, an orbiter built by the United Arab Emirates. It has been circling the red planet since Feb. 9 and has begun making scientific observations of the planet’s atmosphere and weather.

Earlier this week, the spacecraft released images of hydrogen atoms surrounding Mars at different times of day. Such studies may help scientists on Earth better understand how gases circulate on Mars and eventually escape the planet.