There will soon be two places in orbit where astronauts live.

On Thursday, three Chinese astronauts will lift off from the Gobi Desert and, if all goes according to plan, rendezvous with China’s nascent space station. Two of the outpost’s modules were launched in April and May.

The Chinese space station, called Tiangong, or Heavenly Palace, joins the International Space Station, the project led by the United States and Russia that has been continuously occupied for more than two decades.

Thursday’s launch is the third of 11 missions planned to complete construction of China’s first long-term outpost in space before the end of next year.

In China, the construction of the space station has been treated with unusually public fanfare, a reflection of growing confidence by the country’s leadership in its space missions, which have achieved a number of major successes in recent months.

The launch of China’s space station comes at a time when Russia and the United States are squabbling over the future of the International Space Station, and as China and Russia are growing closer in space cooperation. 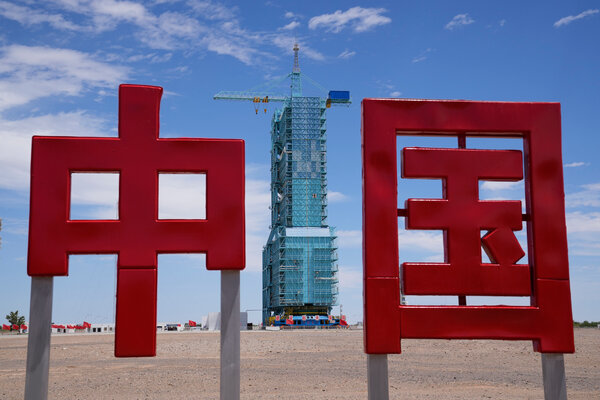 The China Manned Space Agency has set the launch on Thursday at 9:22 a.m. in China (Wednesday night at 9:22 p.m. Eastern time, or 1:22 a.m. Coordinated Universal Time).

Chinese state media is expected to present a live video broadcast of the launch. Video programming ahead of the launch is viewable in the player embedded above.

The country’s space program, long carefully shrouded in secrecy, has in recent months alternated between a lack of transparency and a new openness. On Wednesday, a senior agency official and the three astronauts briefed invited media representatives about the preparations in Jiuquan, a provincial city on the edge of the Gobi Desert, where the launch will take place.

The government allowed live video streams of the launches of the first two modules for the space station in April and May, though it reverted to form during the recent mission to Mars and revealed only bits of information — and photographs — after it successfully landed a robotic rover on the surface last month.

What is China launching?

The astronauts will soar into orbit aboard Shenzhou-12, a spacecraft that will dock to the two modules launched earlier. It will effectively become another piece of the space station, which is orbiting 242 miles, or 390 kilometers, above Earth. (The International Space Station is slightly higher at 248 miles.)

The Shenzhou, modeled on the Soviet-era Soyuz spacecraft, though larger, consists of three modules, including a re-entry craft that will bring the astronauts back to Earth. In addition to the crew, it is carrying basic supplies for a long-term stay, including 120 different meals with “balanced nutrition, rich variety, good flavor and a long shelf life,” according to Ji Qiming, an assistant to the director of the China Manned Space Agency.

A related spacecraft, Shenzhou-5, carried the first Chinese astronaut to space in 2003, making China the only country besides the United States and the Soviet Union and, its successor, Russia, to complete the feat independently. China has since carried out five more crewed flights into orbit, the last in 2016.

Who are the astronauts?

The commander of the mission is Nie Haisheng, 56. He is a former fighter pilot and veteran of two previous Shenzhou missions, in 2005 and 2013.

Liu Boming, 54, is another space veteran, having been part of the mission in 2008 that included China’s first spacewalk. That feat was accomplished by another astronaut, Zhai Zhigang, but Mr. Liu briefly emerged from a portal to become the second Chinese astronaut to touch space.

The third crew member is Tang Hongbo, 45. He has twice been a backup crew member for Shenzhou missions but is making his first trip into space. He noted that his training had now lasted 11 years. “There is pressure for sure,” he said, “but I firmly believe that pressure is motivation.”

How long will the trip to orbit last?

The China Academy of Space Technology told The Global Times, a state newspaper, that the trip to the orbital module would take about 6.5 hours. When it arrives on Thursday evening, the spacecraft will autonomously dock with the station.

That’s similar to the time of a flight in May of a cargo vessel called Tianzhou, which docked with the core module about eight hours after it launched. It carried several tons of supplies to equip and sustain the station, which will have three bedrooms, a bathroom, and places for the astronauts to eat and exercise.

How long will they stay and what will they do aboard the station?

The crew of Shenzhou-12 is scheduled to spend the next three months in orbit. After that a second crew of three astronauts will replace them.

The station remains under construction, so the astronauts’ main tasks will effectively be to continue to build it, installing equipment like cameras and testing various functions, including life support and waste management. They are scheduled to conduct two spacewalks as part of that effort.

Mr. Nie, the commander, told reporters in Jiuquan on Wednesday that this mission would be more arduous and challenging than his previous two.

“We will not only have to arrange the core module, the ‘space home,’” he said, “but also to carry out a series of key technology verifications.”

What is China’s space station and what will it do?

China’s first two space stations were short-lived prototypes, but the Tiangong is intended to operate for at least a decade, joining the International Space Station.

The Chinese station will serve as an orbiting laboratory for the country’s space program, allowing it to perfect operations and conduct new experiments — at least nine of them, so far, with international partners. Officials have said that once the station is completed next year, they will consider ferrying foreign astronauts to the station.

Mr. Ji, the assistant director, acknowledged at a briefing that China was “a latecomer” when it came to developing an orbiting space station, a feat the United States and Soviet Union accomplished decades ago. He noted, however, that China benefited from “latecomer advantages,” presumably the experiences of those previous stations.

Like all of China’s space missions, its successes in space are seen as a validation of the Communist Party’s rule. Mr. Ji noted that the Shenzhou’s crew would be in orbit on July 1, the official anniversary of the founding of the Chinese Communist Party in Shanghai 100 years ago.

“The construction and operation of the space station can be considered an important symbol,” he said, “measuring a country’s economic, technological and comprehensive strength.”