China will aim to hit peak emissions before 2030 and for carbon neutrality by 2060, President Xi Jinping has announced.

Mr Xi outlined the steps when speaking via videolink to the UN General Assembly in New York.

The announcement is being seen as a significant step in the fight against climate change.

China is the world’s biggest source of carbon dioxide, responsible for around 28% of global emissions.

With global climate negotiations stalled and this year’s conference of the parties (COP26) postponed until 2021, there had been little expectation of progress on the issue at the UN General Assembly.

However China’s president surprised the UN gathering by making a bold statement about his country’s plans for tackling emissions.

He called on all countries to achieve a green recovery for the world economy in the wake of the coronavirus pandemic.

According to the official translation, Mr Xi went on to say:

“We aim to have CO2 emissions peak before 2030 and achieve carbon neutrality before 2060.”

Until now China has said it would peak its emissions by 2030 at the latest, but it has avoided committing to a long-term goal.

Emissions from China continued to rise in 2018 and 2019 even as much of the world began to shift away from fossil fuels.

While the Covid-19 crisis this spring saw the country’s emissions plunge by 25%, by June they had bounced back again as coal-fired plants, cement and other heavy industries went back to work. 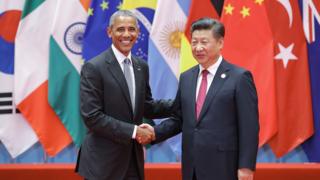 Observers believe that in making this statement at this time, the Chinese leader is taking advantage of US reluctance to address the climate question.

“It demonstrates Xi’s consistent interest in leveraging the climate agenda for geopolitical purposes.”

Back in 2014 Mr Xi and then US-President Barack Obama came to a surprise agreement on climate change, which became a key building block of the Paris agreement signed in December 2015.

Mr Xi has again delivered a surprise according to Li Shuo.

“By playing the climate card a little differently, Xi has not only injected much needed momentum to global climate politics, but presented an intriguing geopolitical question in front of the world: on a global common issue, China has moved ahead regardless of the US. Will Washington follow?”

There are many questions about the announcement that remain unanswered, including what is meant exactly by carbon neutrality and what actions the country will take to get there.

However most observers agreed that the announcement from China was a significant step, not least because of the country’s role in financing fossil fuel development around the world.

“China isn’t just the world’s biggest emitter but the biggest energy financier and biggest market, so its decisions play a major role in shaping how the rest of the world progresses with its transition away from the fossil fuels that cause climate change,” said Richard Black, director of the Energy and Climate Intelligence Unit (ECIU), a UK-based think tank.

“The announcement today is also a major fillip for the European Union, whose leaders recently urged President Xi to take exactly this step as part of a joint push on lowering emissions, showing that international moves to curb climate change remain alive despite the best efforts of Donald Trump and [Brazil’s president] Jair Bolsonaro in the run-up to next year’s COP26 in Glasgow.”