China aims to finish its first space station by the end of the year: Beijing will launch two new modules to join Tianhe core to complete Tiangong station and will break a national record with 50 rocket launches

China plans to complete its Tiangong space station by the end of the year, and will send two modules, Wentian and Wengtian, on two Long March 5B rockets.

These launches are among 60 that China plans to send into space this year, beating its own 55 launch record set last year, and the 48 launches from US soil.

Launches from the US could far exceed the Chinese total though, with SpaceX alone on target to send a rocket into space every week.

The China National Space Administration will send the two Tiangong modules to space in the coming months, although no specific date has been revealed.

They will be docked with the Tianhe core module that was launched in April last year, and be positioned into place by a large robotic arm attached to the station. 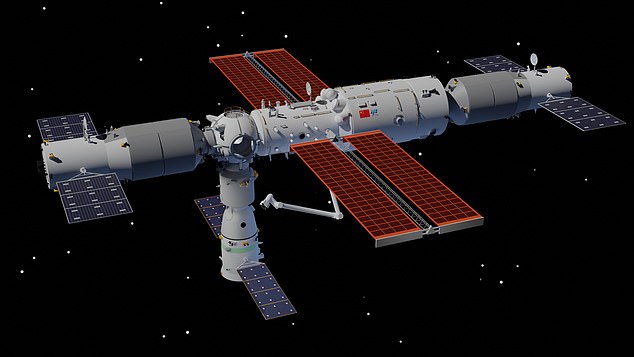 China plans to complete its Tiangong space station by the end of the year, and will send two modules, Wentian and Wengtian, on two Long March 5B rockets. Artist impression 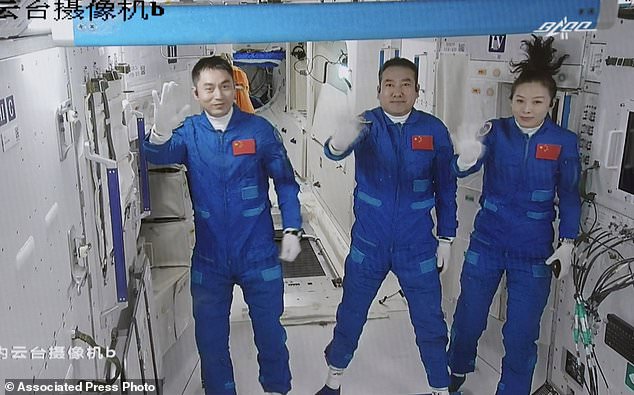 The modules heading for Tiangong station each have a mass of over 44,1000 lb and are designed to be science laboratories, similar to many ISS modules.

The Wentian module also includes airlock facilities, that will make spacewalks easier, and includes a second robotic arm to join the one attached to Tianhe, reports Space.com.

China’s military-run space program was barred from the International Space Station, mainly due to US objections, so it set out to build its own orbital facility.

Working largely on its own, China constructed its Tiangong space station, building and then abandoning two experimental stations before embarking on the latest iteration – which it plans to have as a long-term orbital facility.

The current six-month mission Shenzhou-13 by the crew aboard Tianhe is China’s longest since it first put a human in space in 2003.

The crew has conducted a pair of spacewalks – including the first by a Chinese female astronaut – and carried out tests alongside the station’s robotic service arm. 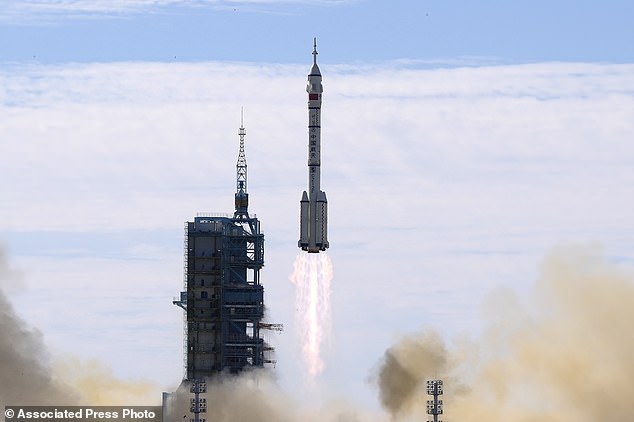 A Long March-2F Y12 rocket carried the first crew of Chinese astronauts in a Shenzhou-12 spaceship for Tiangong. China expects to have 60 launches in 2022

This arm, along with the second arm being added this year, are used by the station for docking spacecraft.

‘After the T-shaped structure is formed, we will fully test the functions and performances of the space station as a whole,’ Bai Linhou, from the China Academy of Space Technology, and station deputy chief designer, told CCTV.

‘We estimate that the space station will enter the operation phase at the end of the year,’ he explained.

When it reaches orbit and is docked, Wentian will act as a backup for the Tianhe core module, to improve redundancy for the station.

There are a total of six Chinese space station missions planned for this year,  including two Tianzhou cargo spacecraft and a pair of Shenzhou crewed missions to send fresh astronauts to the station.

Out of 50 official launches, they will take 140 spacecraft into orbit – made up of satellites, crew and modules for Tiangong.

These are being launched by the China Aerospace Science and Technology Corporation, sending 48 Long March rockets last year. In total there are thought to be 60 launches planned from China this year.

China has been ramping up its space program in recent years, including becoming just the third nation to land a rover on the surface of Mars, and the first to put a rover on the far side of the Moon.

The country also became the first to return samples of moon rocks back to Earth for the first time since the end of the Apollo missions in the 1970s.

The program has also drawn controversy. In October, China´s Foreign Ministry brushed off a report that China had tested a hypersonic missile two months earlier, saying it had merely tested whether a new spacecraft could be reused.

This is all at a national level, with startups and firms within China also working on space planes, satellite constellations and launch vehicles.