How children with phone-obsessed parents are more likely to be DEPRESSED because they feel shunned, rejected and excluded by their family

Parents who ignore their children and use their smartphones instead of paying them attention may be putting their offspring at risk of depression.

Chinese researchers studied 530 students aged between 10 and 18 years old to see if they were victims of parental ‘phubbing’ – a portmanteau of ‘phone’ and ‘snubbing’, which means being ignored in preference for a phone.

Children who had phone-obsessed parents showed greater depressive symptoms when filling out a questionnaire than those who received undivided attention. 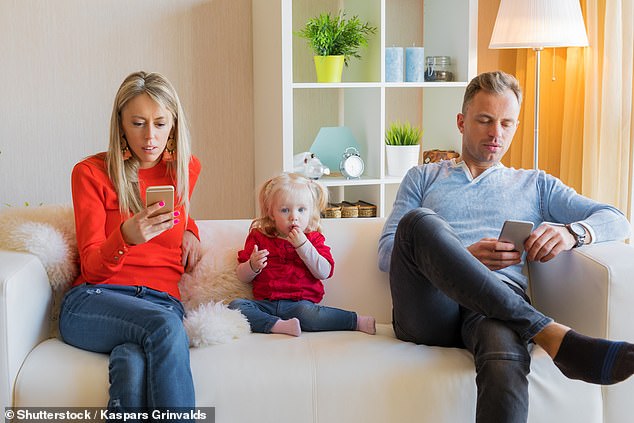 Children who are ignored by parents who are too focused on their mobile phones are more likely to develop an addiction to suffer symptoms of depression, a study has found (stock photo)

Phubbing is a social exclusion behaviour related to mobile phone use.

The word ‘phubbing’ itself is a portmanteau of the words phone and snubbing.

To phub someone is to ignore them and focus on something on your mobile phone such as texting or social media instead, despite being in their presence.

The term was first coined in 2012 as part of a campaign to stop the practice completely.

‘Based on the definition of “phubbing,” the present study defined “parental phubbing” as a phenomenon where parents use their mobiles to make a child feel excluded in parent-child interactions,’ the researchers explain in the study, published in the Journal of Adolescence.

Examples of parental phubbing include regularly checking a phone screen during meal times and always having to be able to see their handset’s screen.

The Chinese study asked students to complete a questionnaire, rating their perceptions of parental warmth and rejection.

Children in the study ranged in aged from ten years old to 18 years old, with the average age being 13 years.

A questionnaire posited various questions to assess their parents’ smartphone use.

One question, for example, read: ‘During a typical mealtime with my parents, my parents pull out and check their cellphones’ and the participants rated this on a scale of one to five.

One was ‘never’ and five was ‘every time’.

Another statement the participants had to respond to was: ‘My parents place their cellphones where they can see them when we are together’.

Then a separate questionnaire was given to the same students to assess their levels of depression.

The researchers explain in their research they asked 20 questions and had the students rank their depressive symptoms in the last week on a scale between one and four.

On this scale, one equated to not at all and four was ‘a lot’.

When the academics assessed this data they found the more time parents spend on their gadgets when around their kids, the more likely they are to develop depression.

Children of parents who are tied to their phones felt rejected and experience less warmth from their parents, who they think are more interested in staring at screens.