Five-year-olds playing three or more hours of video games a day are MORE likely to be overweight as teenagers – and late nights and sugary drinks are also to blame, study claims

Parents letting their child play lots of video games are signing the youngster up for weight gain a decade later, a study has revealed.

More than 16,000 children were tracked from age five through to age 14 and scientists assessed the relationship between video games and weight.

Results revealed children who regularly played video games as a five-year-old had a higher BMI nine years later, compared to those who did not play video games.

Drinking sugary drinks and irregular bedtimes also have a significant impact on children, the study found, and could partly be to blame for the weight change. 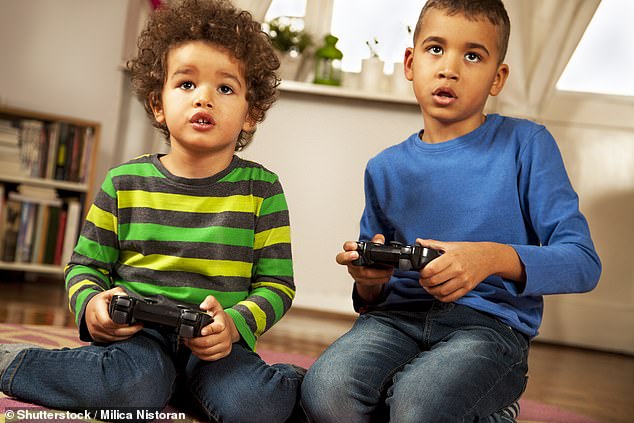 Study revealed children who regularly played video games as a five-year-old had a higher BMI nine years later, compared to those who did not play video games (stock photo)

The study, funded by Cancer Research UK, is the first to look at the potential effect of video game use on children’s BMI over time.

Scientists used a BMI metric specifically designed to measure levels of obesity while adjusting for the differing growth rates of children as they age.

The BMI-SDS range considered to be healthy from age five to 20 is between minus two and one, while possible risk of overweight is defined as one to two.

Five-year-olds who played three hours or more of video games per day had an associated 0.085 higher BMI-SDS aged 14 compared with non gaming children.

Lead author Dr Rebecca Beeken, from the University of Leeds, said: ‘Childhood obesity is one of the biggest public health threats facing this country, with over a third of children in the UK leaving primary school affected by overweight or obesity.

‘This research shows a potential connection between gaming in young children and an increased chance of higher weight in later years.

‘It also shows that consuming sugar-sweetened drinks and going to bed at irregular times may be partly responsible for the associated increased weight.

‘Whilst the effect size across the whole group is relatively small, for some children gaming could represent a significant risk of weight gain.

‘However, we need to remember obesity is complex, and this is potentially just one small part of the puzzle.’

Researchers pointed out brands such as Red Bull, Coca Cola, Boost and Monster are some of the many drinks companies that encourage gamers to buy and consume sugar-sweetened drinks which can cause weight gain.

This is legal as there are no restrictions on advertising such items through video games, unlike in TV.

Dr Beeken said: ‘There is a recognition that advertising of sugar-sweetened drinks to children should be tightly controlled on television, but advertising within video games has not been considered to the same extent.

‘Stricter advertising laws are urgently needed to protect young gamers from being encouraged to drink large quantities of unhealthy products, which we know can have lasting health consequences.’

The effects remained even when accounting for the amount of other screen time that children were exposed to, such as watching television.

PhD researcher William Goodman, who conducted the research from University College London, said: ‘We are certainly not suggesting that gamers or their parents should chuck their consoles out of the window.

‘But we think it is important to recognise that some gamers could be at risk of gaining weight, and that there are steps we can take to minimise these risks.

‘One option would be to encourage parents to use the inbuilt parental settings on gaming consoles to set time restrictions on how long children can play for.

‘There is no way forward without engaging with the gaming community on possible next steps.’

Findings were published in the JAMA Paediatrics journal.

WHY HAS THE WHO CLASSIFIED INTERNET GAMING AS A MENTAL HEALTH DISORDER?

The World Health Organisation has classified playing video games on the internet as an official mental health disorder.

‘Gaming disorder’ is defined as ‘a pattern of gaming behavior characterized by impaired control over gaming, increasing priority given to gaming over other activities to the extent that gaming takes precedence over other interests and daily activities, and continuation or escalation of gaming despite the occurrence of negative consequences.’

To be diagnosed with gaming disorder, the individual must:

(2) Have experienced this impairment for at least 12 months

WHO advises gamers to be mindful of how much time they spend playing, especially if it is to the exclusion of other daily activities.

They should also be alert to changes in their physical or psychological health and social functioning which could be attributed to gaming.