‘Child friendly’ Tone e20 smartphone that blocks users from taking naked selfies, doesn’t save ‘inappropriate’ images and lets parents check up on their kids is launched in Japan

A new mobile phone that has been branded as ‘child friendly’ is able to block users from taking naked selfies and doesn’t save ‘inappropriate’ images to the phone.

The device, only available in Japan, can also be set up to send an alert with pixelated images to their parent if a child tries to take a picture of their naked body.

The phone has been specifically designed to target a younger audience with a range of parent friendly protective features and a lower price tag at about £180. 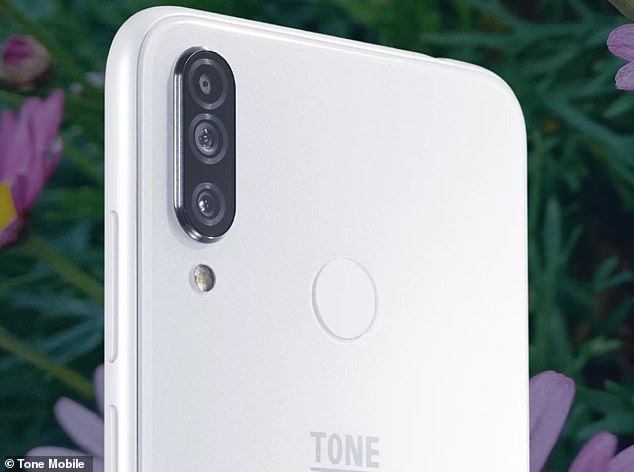 The company says it isn’t designed to stop adults sending pictures of themselves to one another, but to protect younger users.

It’s camera app software is similar to technology used by social media companies to alert authorities if someone shares naked images of children.

Despite being aimed at a younger audience it still has a large 6.26 inch display, Android 9.0 and a triple-lens camera similar to bigger budget devices.

Tone says its goal was to develop a device that provided increased security for minors who may be targeted by online scammers and paedophiles.

They say the aim was to protect children from potential coercion tactics where they are tricked or threatened into sending nude pictures of themselves.

Children will be able to simply say ‘my phone won’t allow me to take that picture’.

Even though it won’t save an inappropriate image, the phone can be setup to send a pixelated thumbnail to the parent along with the date, time and GPS information on where it was taken – every time they attempt to capture a naked selfie.

Tone Mobile says it does not retain any of the pixelated thumbnails or images captured from the camera on any other device or server beyond the parents phone.

There are a range of security features available to parents using the Smartphone Protection feature – which is already available without the nudity restriction on older phones made by the Japanese company.

They include the ability to track where your child is, see what websites they visit and get warnings about changes in behaviour. 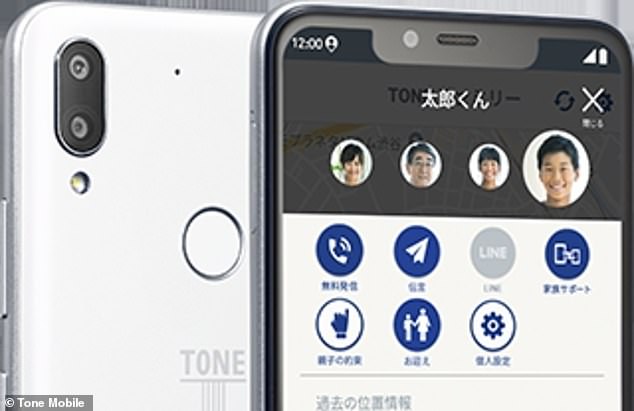 The child protection feature in the camera software automatically detects naked flesh, blocks the image from being taken and can send a pixelated thumbnail to parents with a location

It uses artificial intelligence to monitor the apps, websites and even real world walking and transport routes a child takes.

If anything significant changes in their behaviour it can warn parents – or if the child doesn’t get the bus they get to school every day it can alert the emergency services.

It is also ‘school friendly’ as certain apps can be locked out depending on location – so if the child is at school it could automatically social media apps and only allow those for learning or talking to parents.

The feature is called Smartphone Protection and is under the control of an adult user who can decide to turn it on or off using a special passcode.

If the phone isn’t for a child and is instead being used by an adult it can be disable – that includes the naked picture blocking – which would allow someone to take photos of themselves in as few or as many clothes as they like.

Facebook has disclosed its rules and guidelines for deciding what its 2.2 billion users can post on the social network.

The full guidelines can be read here. Below is a summary of what they say:

Facebook says it considers the language, context and details in order to distinguish casual statements from content that constitutes a credible threat to public or personal safety.

Facebook does not allow any organizations or individuals that are engaged in terrorist, organized hate, mass or serial murder, human trafficking, organized violence or criminal activity.

Facebook says it prohibit people from promoting or publicizing violent crime, theft, and/or fraud. It does not allow people to depict criminal activity or admit to crimes they or their associates have committed.

The social network says people can draw attention to harmful activity that they may witness or experience as long as they do not advocate for or coordinate harm.

The rules for ‘credible violence’ apply for suicide and self-injury.

Facebook does not allow content that sexually exploits or endangers children. When it becomes aware of apparent child exploitation, we report it to the National Center for Missing and Exploited Children (NCMEC).

The site removes images that depict incidents of sexual violence and intimate images shared without permission from the people pictured.

Facebook’s harassment policy applies to both public and private individuals.

It says that context and intent matter, and that the site will allow people to share and re-share posts if it is clear that something was shared in order to condemn or draw attention to harassment.

Users should not post personal or confidential information about others without first getting their consent, says Facebook.

Facebook does not allow hate speech on Facebook because it says it creates an environment of intimidation and exclusion and in some cases may promote real-world violence.

It will, however, allow graphic content (with some limitations) to help people raise awareness about issues.

The site restricts the display of nudity or sexual activity.

It will also default to removing sexual imagery to prevent the sharing of non-consensual or underage content.

It defines this as content that targets victims of serious physical or emotional harm.

It does not allow people to use misleading or inaccurate information to artificially collect likes, followers or shares.

Facebook will require people to connect on Facebook using the name that they go by in everyday life.

Facebook says that there is also a fine line between false news and satire or opinion.

For these reasons, it won’t remove false news from Facebook, but, instead, significantly reduce its distribution by showing it lower in News Feed.

Facebook will memorialise accounts of people who have died by adding “Remembering” above the name on the person’s profile.

The site will not remove, update or change anything about the profile or the account.