Slowing the tide of ocean plastic: Microfibre filters should be fitted to all washing machines by law to protect sea life, environmental charity says

Washing machines for sale should be legally required to have special filters to catch plastic microfibres released from clothing, an environmental charity has said.

The Marine Conservation Society’s ‘Stop Ocean Threads’ campaign is calling for the UK Government to write the use of the filters into law by the year 2024.

However, the charity is also lobbying washing machine makers directly in the hope of speedier action — and is asking the public to help by tweeting their message.

Research conducted by YouGov on the charity’s behalf found that more than four-fifths of adults surveyed supported the introduction of such legislative measures.

Meanwhile, 26 per cent said that they would be quite willing to pay an extra £50 for their next washing machine if such came with a filter to catch plastic microfibres.

Less than five millimetres in length, microfibers are produced across every step of the garment fabrication process — and released when clothes are machine washed.

In September, a study reported that washing machines are dumping around 165,000 tons of synthetic fibres into the ocean each year — and other 175,000 tons on land. 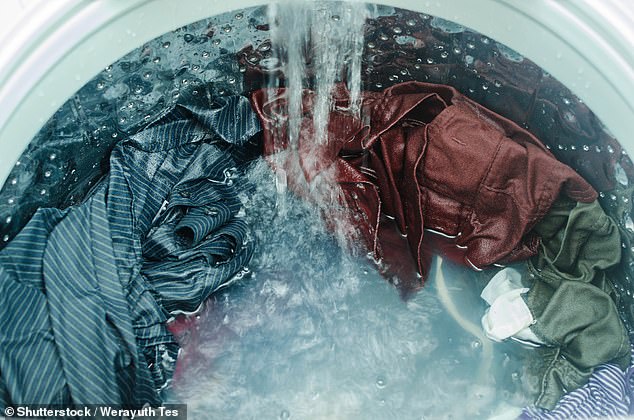 Washing machines for sale should be legally required to have special filters to catch plastic microfibres released from clothing, an environmental charity has said

‘Our research has found that the public is largely supportive of our call for legislation, and consumers are willing to pay a little more to reduce the flow of microplastics into the ocean,’ said the Marine Conservation Society’s Laura Foster.

‘It’s fantastic to see the support our petition has received so far, but now we need the public to show their support and join our action to engage with manufacturers directly,’ Dr Foster added.

‘If we can show manufacturers that the public wants these filters fitted as soon as possible, we hope to speed up the legislative process and get filters fitted in the near future.’

A petition launched by the charity has to date been signed by more than 12,000 people — and can be found on the Marine Conservation Society website.

Members of the public are also being encouraged to tweet their support of the campaign’s goals directly at washing machine manufacturers.

‘We want washing machine manufacturers to commit to fitting microfibre filters before 2024. Will you do this and help us #StopOceanThreads? Please retweet and share far and wide.’ 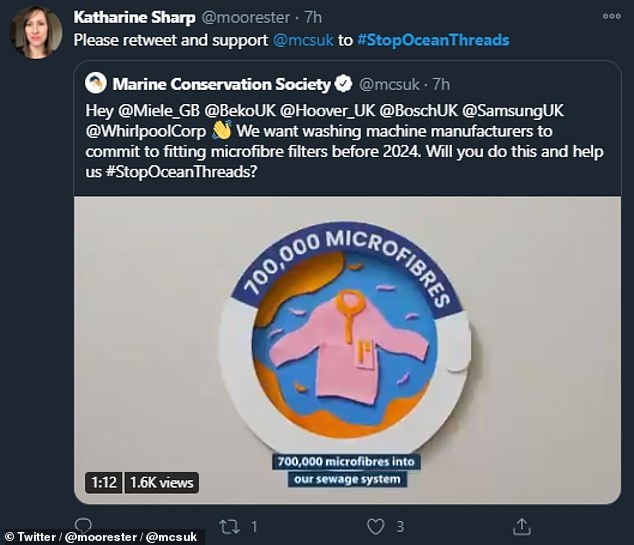 A petition launched by the charity has to date been signed by more than 12,000 people — and can be found on the Marine Conservation Society website . Members of the public are also being encouraged to tweet their support of the campaign’s goals, as pictured

Synthetics fabrics — such as polyester and nylon — are the most commonly used fibres in the textile industry.

They account for more than 60 per cent of the materials used to produce clothes worldwide.

Around 15 per cent of all plastic is used to make synthetic fibres, chiefly for clothing.