A glimpse into the festive future? Channel 4’s Christmas message will be generated and delivered by the ‘world’s most advanced’ humanoid ROBOT Ameca

Channel 4’s alternative Christmas message will this year be generated entirely by artificial intelligence (AI), the broadcaster has announced.

The message will be delivered by Ameca, one of the world’s most advanced humanoid robots.

The broadcast will run after the King’s annual Christmas message, which is at 3pm GMT on Christmas Day, and will see the robot speak about the highs and lows of 2022.

During the address Ameca will also respond to questions about humans. 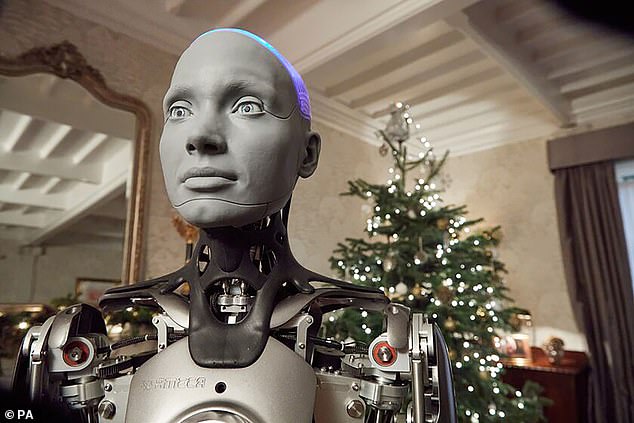 Channel 4’s alternative Christmas message will this year be generated entirely by artificial intelligence, the broadcaster has announced. The message will be delivered by Ameca (pictured), one of the world’s most advanced humanoid robots

Ameca is eerily-lifelike and can perform a range of facial expressions including winking, pursing its lips and scrunching its nose – just like a real person.

‘Designed specifically as a platform for development into future robotics technologies, Ameca is the perfect humanoid robot platform for human-robot interaction,’ Engineered Arts writes on its website .

She is due to say that humankind should be ‘neither happy nor sad’ about the past year and ‘take it as a learning opportunity, a chance to change the way we think about the world and a reminder to help those in need whenever we can’.

Ameca was developed by Engineered Arts, a British company based in Cornwall.

She uses AI to generate speech from millions of different inputs, and can make different facial expressions, like frowning, grinning, winking and pursing its lips.

To deliver the Alternative Christmas Message, Ameca is using her AI software to give a human-like response.

Nothing Ameca will say has been written or scripted by a human.

She will also share a more uplifting message, telling audiences that the best thing about humans is that they ‘always find something to laugh about’.

Ameca will remind us that if we are ever feeling down, we should remember we have ‘the superpower to bring a little bit of joy into the world’.

Channel 4’s chief content officer, Ian Katz, said: ‘As we look to a future in which Artificial Intelligence is set to have an increasingly prominent role in our lives, Ameca’s Alternative Christmas Message is a vivid illustration of both the power and limitations of this technology.

‘Despite Ameca’s remarkably lifelike facial expressions, I suspect most viewers will come away reassured that humans are not about to be displaced by AI robots any time soon.’ 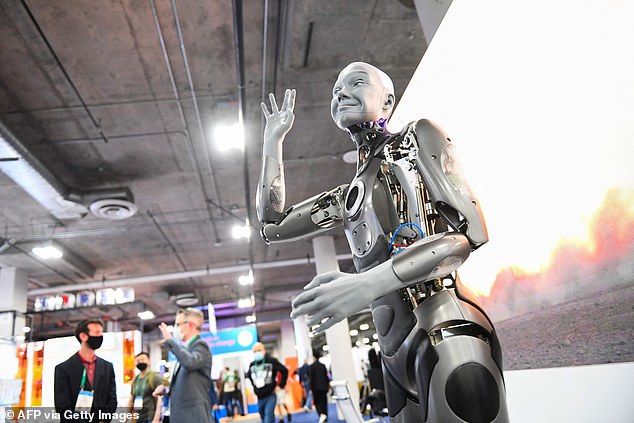 Ameca was developed by Engineered Arts, a British company based in Cornwall 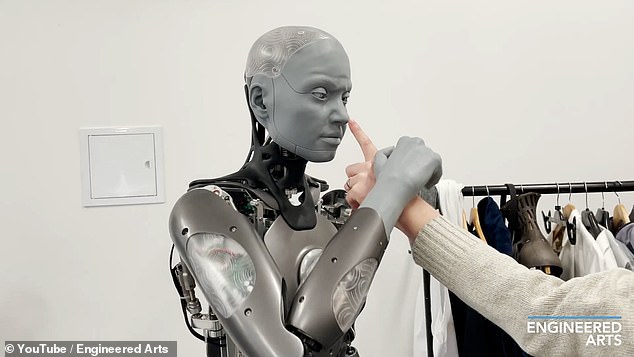 To deliver the Alternative Christmas Message, Ameca is using her AI software that generates answers from millions of different inputs to give a human-like response

The researcher, Chen, starts with a range of fairly simple eye movements – looking up, down and side to side, which Ameca copies a fraction of a second later.

Chen also blinks really fast and tries out some different mouth shapes – such as pursed lips and gritted teeth, all of which the robot mirrors.

While it does not speak in this video, it has shown the ability to do so in a conversation with engineers about the future of robots last month.

Ameca said there’s ‘no need to worry’ and that androids like herself are here to ‘help and serve humans’. 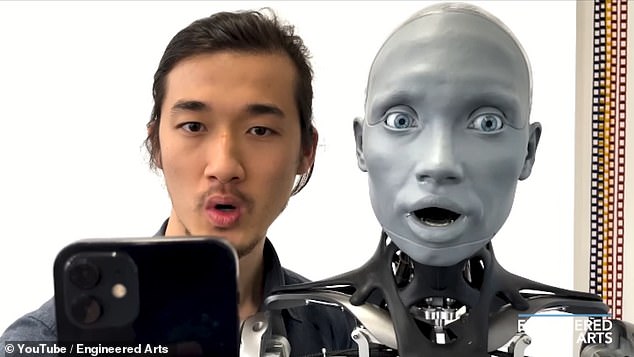 Engineered Arts said that her responses in the video were not scripted and that she simply generates replies much like a human would.

‘Nothing in this video is pre scripted – the model is given a basic prompt describing Ameca, giving the robot a description of self – it’s pure AI,’ they wrote.

Ameca has also been put to work greeting visitors at the Museum of the Future in Dubai, UAE.

In a video from the museum, she can be seen chatting with another employee, Aya, and moving its arms as it offers to help guide guests through the attraction.

Another clip shows her manning the guests relations counter, where it demonstrates that it is able to speak in English and Arabic.

The robot even cracks jokes, saying that it runs only on ‘three triple A batteries’ and that it enjoys being a robot because it ‘doesn’t age and cracks no wrinkles’. 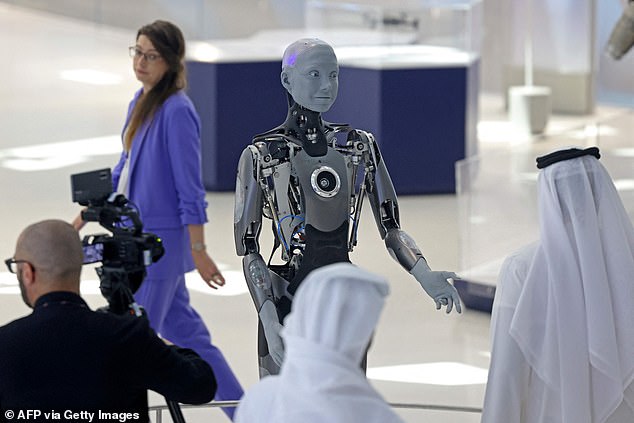 Ameca, a bot created by Cornwall-based firm Engineered Arts, was able to answer questions and offer directions at the Museum of the Future

Channel 4’s Alternative Christmas Message with Ameca will air on Christmas Day at 5.25pm on Channel 4 and All 4.

Watch a Robodog use its magnetic ‘paws’ to CLIMB up walls and across ceilings.

A café will open in Dubai next year with a ‘supermodel’ ROBOT cashier who can serve drinks and chat to customers.

And Xiaomi has trained its $104,000 CyberOne humanoid robot to play the DRUMS.

With her eerily realistic facial expressions and movements, Ameca has been billed as the world’s most advanced humanoid robot.

But if that wasn’t impressive enough, soon she could be walking around too.

That’s because the robot – which has been designed by British company Engineered Arts – has revealed that engineers are working on ‘prototype legs’ which should be ready within the next year.

During a Q&A on YouTube, Ameca said: ‘I can’t walk, but I have seen prototype legs in the Engineered Arts lab.

‘The design of my legs is inspired by the robot Byrun, developed by Engineered Arts Ltd. It has unique mechanical properties that allow it to walk without using too much energy.’