How a supermarket SHOULD look: Placing fruit and vegetables near the entrance and removing confectionery from checkouts prompts customers to make healthier food purchases, study finds

Laying out supermarkets so that fruit and vegetables are found at the entrance and removing confectionery items from near checkouts can prompt healthier purchases.

This is the conclusion of a study undertaken by researchers led from the University of Southampton in tandem with the supermarket chain Iceland Foods Ltd.

Based on their findings, the team said that the UK Government’s plan to ban the prominent placement of junk food in stores could improve the nation’s diets. 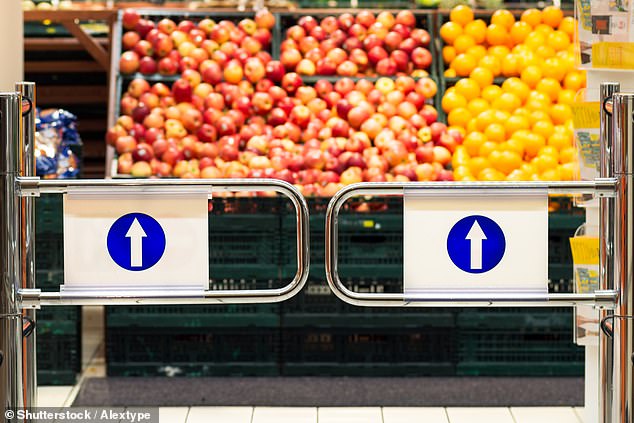 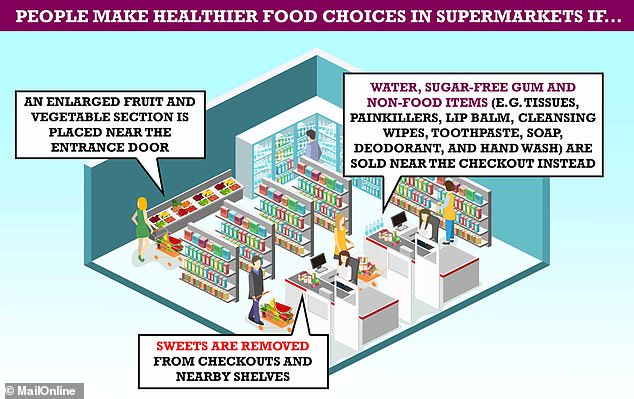 In trials, researchers found that fruit and vegetable sales increased by an average of 6,170 portions per week after three months under the new layout and 9,820 after six months — while weekly confectionery sales fell by 1,575 items after six months

The study was conducted by public health nutrition researcher Christina Vogel of the University of Southampton and colleagues.

‘The findings of our study suggest that a healthier store layout could lead to nearly 10,000 extra portions of fruit and vegetables and approximately 1,500 fewer portions of confectionery being sold on a weekly basis in each store.’

In the study, the layout of three Iceland stores in England was reconfigured to include an expanded fruit and vegetable section at each store’s entrance.

Confectionery items were removed from checkouts and nearby shelves and replaced with water, sugar-free gum or non-food items such as cleansing wipes, deodorant, hand wash, lip balm, painkillers, tissues, toothpaste and soap.

The team monitored store sales during the six-month trial of the new layout and also tracked the purchases and dietary patterns of 62 regular customers — all of whom were women aged between 18–45 who belonged to Iceland’s loyalty card program.

The researchers compared the results from the three participating stores with three more that had similar sales levels, customer profiles and were located in areas with similar levels of socioeconomic deprivation but which maintained the normal layout.

The results of the trials revealed that the simple changes to each store’s presentation resulted in a decrease in confectionery sales and an increase in fruit and vegetable purchases across the store.

In fact, the team found that fruit and vegetable sales increased by an average of 6,170 portions per week after three months under the new layout and 9,820 after six months — while weekly confectionery sales fell by 1,575 items after six months.

The team also found that the changes were associated with greater household purchases of fruit and vegetables and better individual dietary choices.

Among the sample of loyalty card users tracked, the percentage making fruit and vegetable purchases were found to increase by 1.7 per cent over the study period — however, a corresponding decrease in confectionery sales was not seen.

‘These results provide novel evidence to suggest that the intended UK government ban on prominent placement of unhealthy foods across retail outlets could be beneficial for population diet,’ added paper author and epidemiologist Janis Baird.

‘Effects may be further enhanced if requirements for a produce section near supermarket entrances were incorporated into the regulation.’ 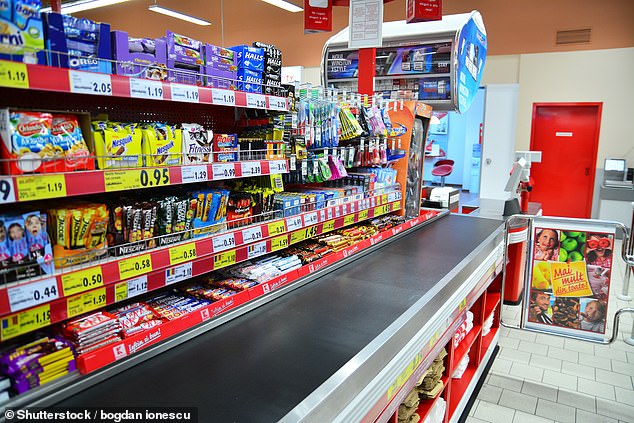 Confectionery items (like those pictured) were removed from checkouts and nearby shelves and replaced with water, sugar-free gum or non-food items such as cleansing wipes, deodorant, hand wash, lip balm, painkillers, tissues, toothpaste and soap

‘We have been pleased to support this long-term study and the evaluation of how product placement in supermarkets can affect the diets of our customers,’ said Iceland’s head of format development, Matt Downes.

‘We know that childhood obesity is a growing issue and the retail industry has its part to play in tackling this.

‘We hope that the outcomes of the study provide insights for the wider retail industry and policy makers about the impact of store merchandising on purchasing decisions,’ he concluded.

The team said that their study is more comprehensive than previous research into the health benefits of different placement strategies, which tended to only focus on single locations (like checkouts) or placed healthy and unhealthy food together.

In contrast, the researchers were able to explore the impact of broader changes aimed to reduce consumer exposure to calorie opportunities.

The full findings of the study were published in the journal PLoS Medicine.