Raise a toast in SPACE! Mumm unveils a futuristic champagne bottle that dispenses small spheres of bubbly which astronauts can gulp down as they float in zero-gravity

A champagne bottle has been unveiled that can give astronauts a taste of the high life while floating around in space.

The Mumm Cordon Rouge Stellar is the product of five years of development, including zero-gravity testing, from GH Mumm.

The futuristic bottle dispenses small spheres of bubbly which astronauts can gulp down as they float in zero-gravity, and is the first bubbly to receive full compliance with space requirements certified by the French National Centre for Space Studies (CNES).

Designer Octave de Gaulle said: ‘This project is, of course, very stimulating because of its highly technological nature and its 100 per cent French identity, from design to manufacturing.

‘But it is also very exciting because technology serves a greater purpose here: champagne condenses the memory of a terroir, a climate, an ancestral savoir-faire and tasting sensations for all those who will evolve far from Earth.’

GH Mumm told MailOnline it has not currently priced the Mumm Cordon Rouge Stellar as the drink ‘will be part of a wider experience’ that is as of yet undefined. 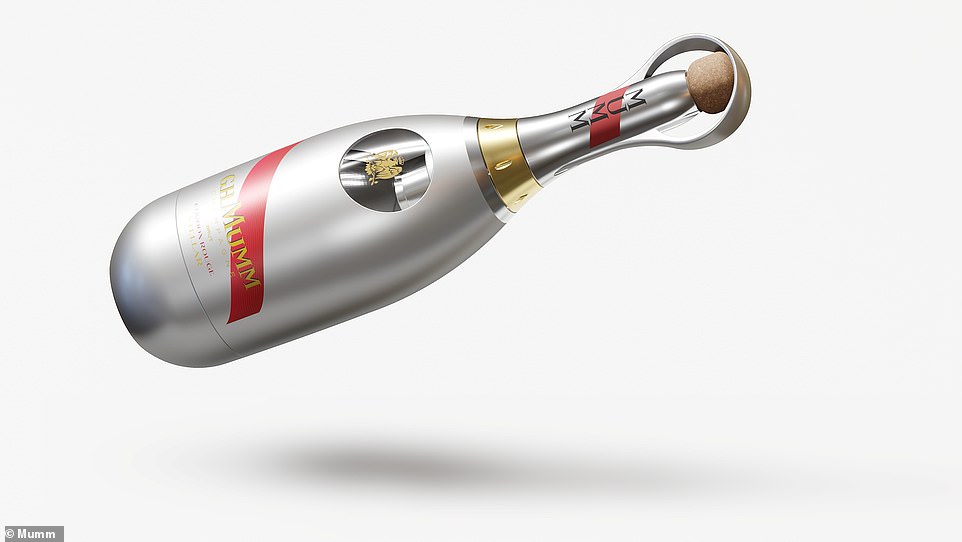 The Mumm Cordon Rouge Stellar is the product of five years of development, including zero-gravity testing, from GH Mumm 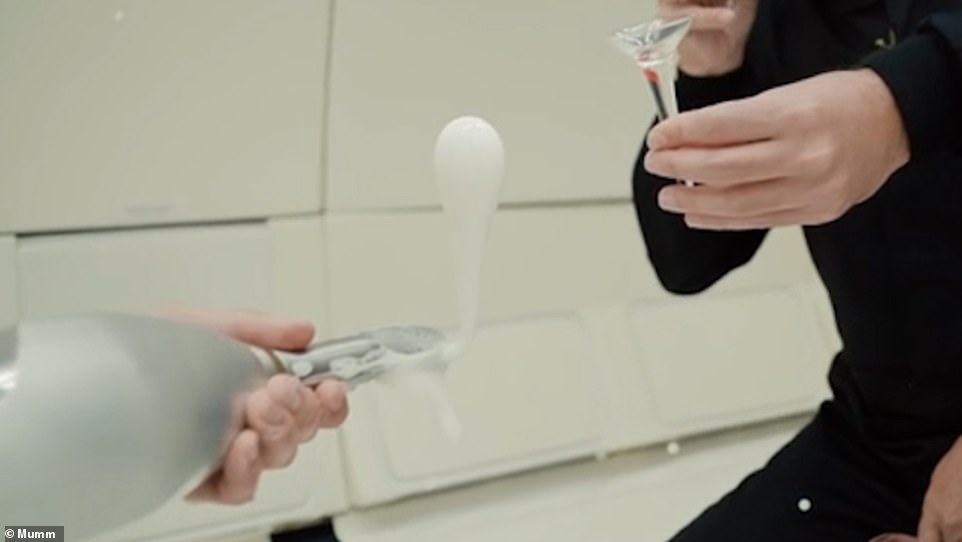 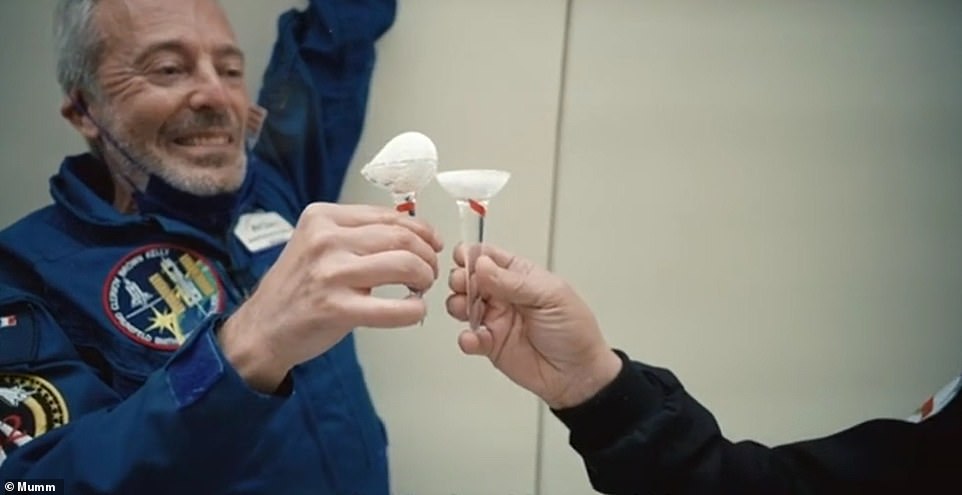 A bottle will join the upcoming Axiom Space crewed missions into low Earth orbit, and eventually allow the astronauts to raise a glass at their space station

HOW CAN PEOPLE DRINK CHAMPAGNE IN ZERO GRAVITY?

The space age bottle is the result of a collaboration between the Mumm Champagne house and designer Octave de Gaulle.

The Champagne is in the upper portion of the bottle.

Below that is a finger-controlled valve which people can squeeze when they want to release a globule of Champagne.

With the help of natural gas in the bottle, small globules of the liquid are released, emerging as foam.

Designers had to stop the wine from streaming across the cabin.

In order to do this they created an aluminium strip that forms a ring over the bottle’s top.

This means the liquid does not come out all at once.

Drinkers can then scoop the wine out of the air using a tiny long-stemmed glass that resembles an egg cup.

Jean-François Clervoy, French European Space Agency (ESA) astronaut, added: ‘In space, it is essential to maintain a link with Earth and its culture.

‘As a symbol of the art of living that has endured through time, champagne has this universal appeal.’

The Mumm Cordon Rouge Stellar is the first champagne designed specifically for space travel and to be enjoyed away from Earth.

Its half-glass bottle has a long neck topped by a cork and a specially designed stainless steel opening-closing device.

By pressing the finger controlled valve, the mechanism is opened to release a globule of champagne spheres.

The liquid is stored in the upper portion of the bottle, and emerges as a foam as natural gas is forced through it.

Drinkers can then scoop the wine out of the air using a tiny long-stemmed glass that resembles an egg cup.

To stop the wine from streaming across the cabin, the release mechanism is locked on by a stainless steel ring.

This design means that the liquid only comes into contact with glass and stainless steel, thus ensuring its preservation, according to Mumm.

The high-tech bottle is also covered in a protective shell made of aeronautical-grade aluminium.

The first iteration, named Mumm Grand Cordon Stellar, was released in 2018 and was promoted from Usain Bolt.

This was aimed specifically to cater to suborbital and orbital space tourism promoted by private operators like Virgin Galactic and Jeff Bezos’ Blue Origin.

Since then, Laurent Fresnet, Cellar Master at Mumm, has participated in a parabolic flight in an Airbus airliner in order to understand the impact of zero-gravity conditions on the wine.

The bottle now complies with official space requirements, and also respects AOC Champagne regulations, certifying the integrity of the wine.

To do this it had to fit constraints regarding its pressure, food compatibility, ergonomics and gas bubbles in the absence of gravity.

Mumm Cordon Rouge Stellar has a futuristic appearance, but is also intended to be similar to the traditional champagne bottle.

The champagne producer’s aim was to reproduce the ritual of wine tasting as faithfully as possible in space, but this was not as simple as it may seem.

As the bubbles no longer rise to the surface, they don’t release the aroma molecules they contain, thus changing the smell and primary notes of the drink. 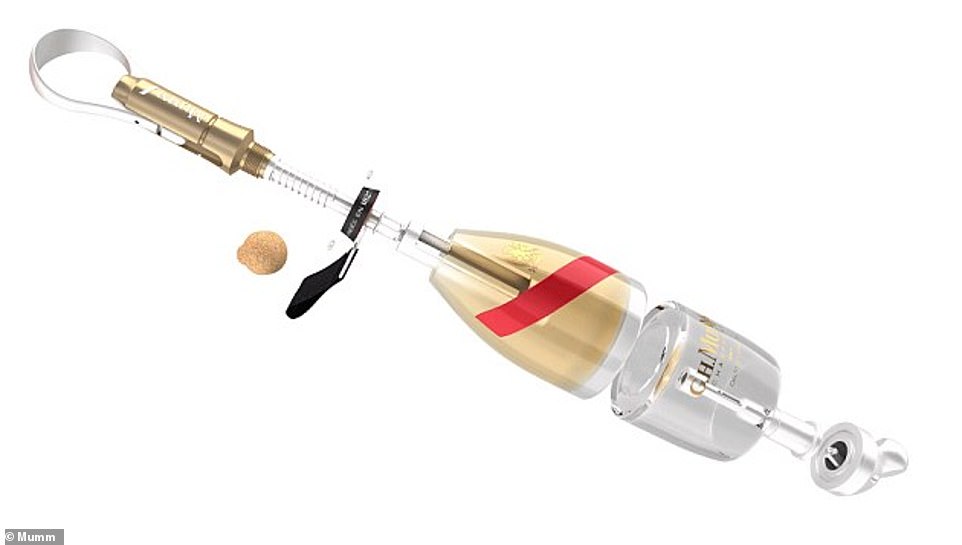 The Champagne is in the upper portion of the bottle. Below that is a finger-controlled valve which people can squeeze when they want to release a globule of Champagne 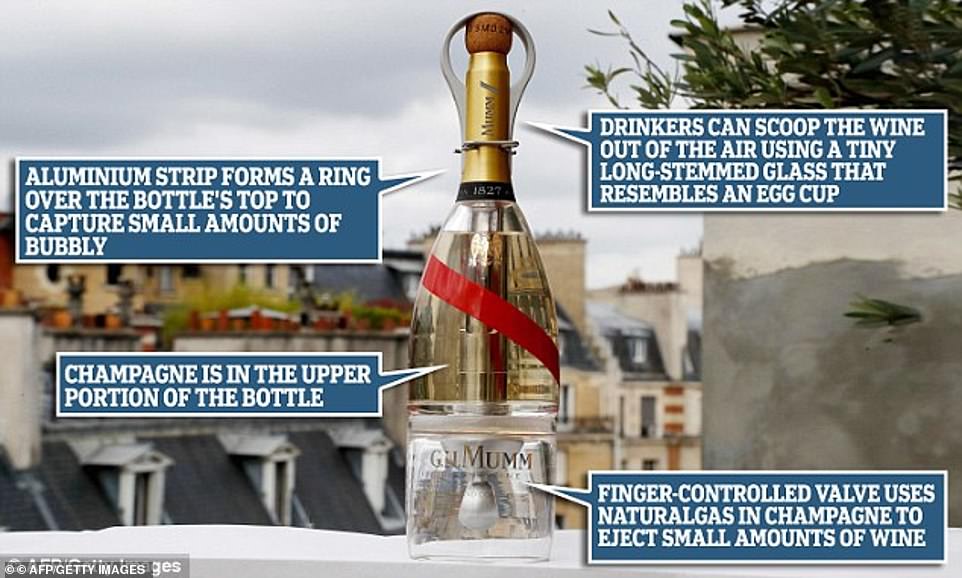 With these olfactory changes in mind, Mr Fresnet specifically selected a blend of Mumm Cordon Rouge made with grapes from the 2016 harvest.

This is the champagne House’s signature grape variety, and is supplemented with up to 36 per cent reserve wines from the past five years to enhance its flavour.

Mr Fresnet said: ‘My goal was to retain the freshness and power of Mumm Cordon Rouge, and to enhance the intensity of its aromas with more ageing and a dosage liqueur made with wines aged in oak barrels.’

As a result, the characteristics of the Mumm champagne are retained in tasting conditions where the senses are altered.

A bottle will join the upcoming Axiom Space crewed missions into low Earth orbit, the next of which will be a flight to the International Space Station, set to launch next year.

After fine-tuning the drink through experiments in real space conditions, the goal is for travellers to be able to enjoy it while on board the world’s first commercial space station, currently being developed by Axiom Space.

‘This philosophy of celebrating humankind empowers our goal for Axiom Station, a next generation destination that will serve as a thriving home in space to enable a diverse space economy, further exploration and enable more of humanity to access space.

César Giron, President of Maison Mumm, said: ‘Innovation has been part of Maison Mumm’s identity since 1827 and Mumm Cordon Rouge Stellar is a perfect illustration of this.

‘This project brings together the French savoir-faire of excellence for the benefit of conviviality that is so dear to us here on Earth.

‘As early as 1904, Mumm was present on board with Commander Jean-Baptiste Charcot to celebrate the first successful French expedition to Antarctica.

‘Tomorrow, it will accompany the life of the pioneers of the 21st century in the same way in this new territory that is space.’

Space Perspective has finalised its design for Spaceship Neptune; a sleek-looking capsule that will offer views 20 miles above Earth and luxury amenities.

The Florida, USA company promises a calm experience free from turbulence since its spherical pod is being propelled into the planet’s stratosphere by a balloon.

Passengers will also be able to hold their drinks steady since they won’t experience zero gravity. 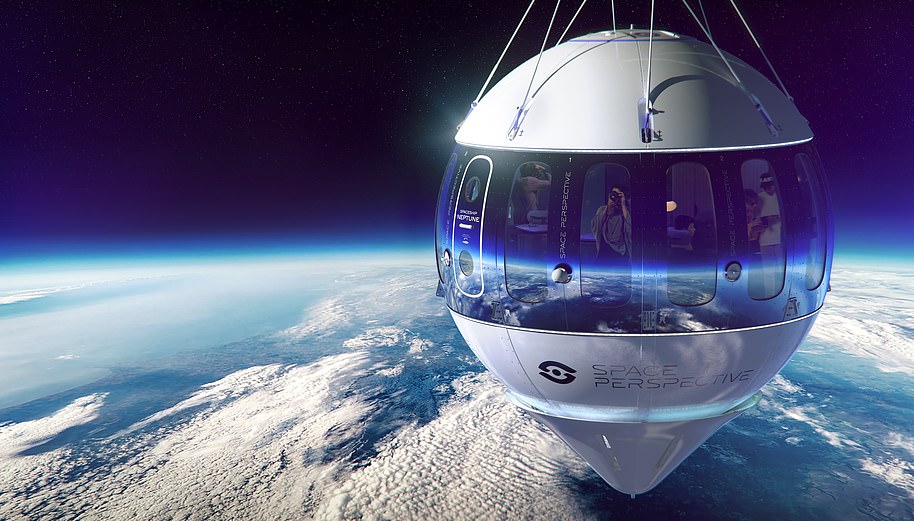 Space Perspective is offering a unique experience that’s smoother than the ride on the spacecrafts of Blue Origin and Virgin Galactic, owing to the balloon that’s used to lift the capsule to space. Pictured above is the new design