Sony car, a 3D laptop with images that ‘leap off the screen’ and the PlayStation VR2: Here’s what to expect at the Consumer Electronics Show in Las Vegas this week

The moment that tech fans around the world have been waiting for is finally almost here, with the Consumer Electronics Show (CES) set to return on January 5.

The event will be the first in-person, full capacity CES since 2020, due to the Covid pandemic.

Held at the the Las Vegas Convention Center, the event showcases some of the newest products from tech giants including Amazon, Samsung and Meta.

It takes place between January 5 and January 8, although most major announcements will take place during the two days before. 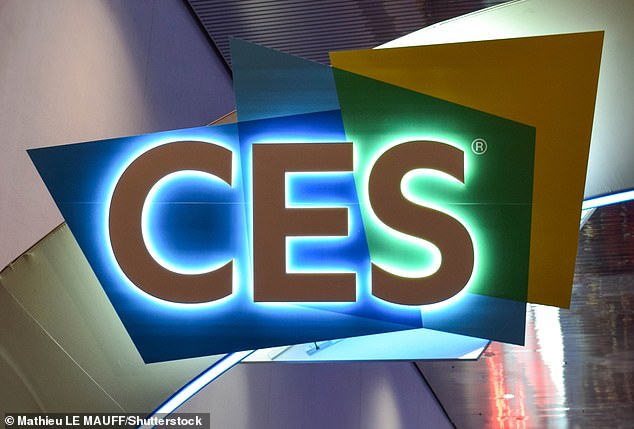 CES 2023 is set to be the first in-person, full capacity Consumer Electronics Show since 2020, due to the Covid pandemic

‘CES is the most influential tech event in the world – the proving ground for breakthrough technologies and global innovators.

‘This is where the world’s biggest brands do business and meet new partners, and the sharpest innovators hit the stage.’

Here’s all you need to know about CES 2023 before it officially commences on Thursday.

The show, which is usually attended by more than 100,000 people, is often used by some of the biggest names in the industry to announce new products.

The first Consumer Electronic Show kicked off in 1967, with 250 exhibitors and 17,500 attendees in New York.

It used to be held twice a year in various until 1998, when it switched to once-a-year with Las Vegas as the permanent location. 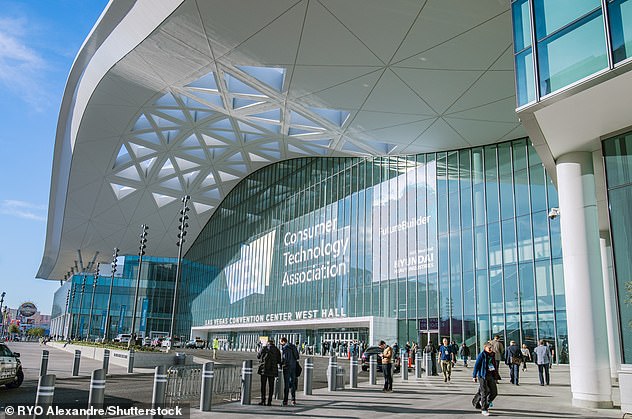 CES is held in January at the Las Vegas Convention Center (pictured) in Winchester, Nevada, US

WHO WILL BE ATTENDING?

More than 2,800 companies have signed up to attend CES 2023, including big names such as Samsung, Amazon, Google, LG, Microsoft, Sony, Panasonic and Asus.

Apple, meanwhile, doesn’t attend CES, nor the other big tech exhibitions of the year, because it prefers to hold its own events under its own steam.

Other smaller attendees include Canadian robotics firm WowWee, ‘deeptech’ startup Greenerwave that specialises in the control of electromagnetic waves and LA health-tech Movano, which will show off its Evie ring, a wearable developed for women. 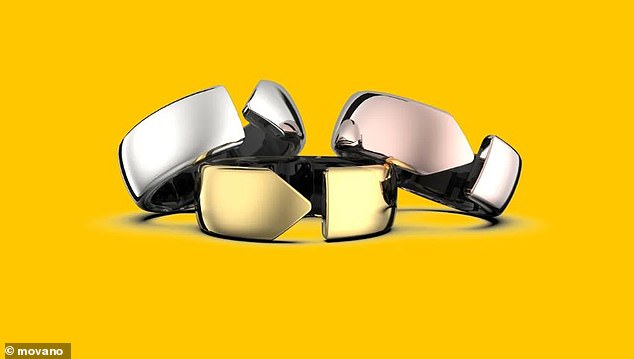 Evie ring, a wearable developed with women in mind, will be shown off at CES 2023 by its creator, Movano

WHAT ELSE WILL BE ANNOUNCED?

Some of the big companies have been tight-lipped on what it might reveal at CES 2023, while others have released teasers.

Samsung has already sent out invitations for its CES press conference at 2pm local time on January 4, a day before the event is set to begin.

The invitation has the title ‘Bringing calm to our connected world’.

Samsung has said CES will be an opportunity to ‘share our journey together for creating a sustainable and prosperous future’. 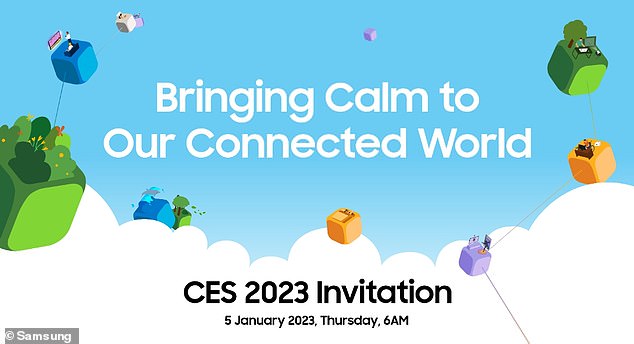 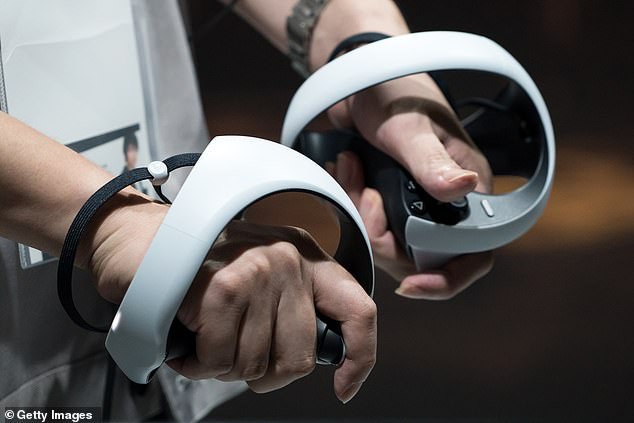 Pictured, controllers for the Sony PlayStation VR2 headset for the PlayStation 5. The headset is set to be released in February so will likely be on display at CES 2023

It will also present a ‘new and expanded experience’ on SmartThings, its ecosystem for internet-connected devices.

Sony, meanwhile, has released a video of what looks like a car, along with the message, ‘See you in Las Vegas on January 4’.

It’s already known that the Japanese giant has partnered with compatriot Honda to produce and sell electric vehicles from 2025.

Sony’s PlayStation VR2, its new virtual reality headset for the PlayStation 5, is also set to be released in February so will likely be on display.

Asus is rumoured to be launching a 3D OLED laptop, featuring lifelike images that appear to leap off the screen.

A teaser video from the company posted in December with the words ‘witness the change’ shows what this might look like.

Dell, HP and Lenovo are expected to reveal new 2-in-1s or monitors with a focus on gaming.

Amazon also has a dedicated webpage for CES 2023, although it doesn’t reveal much in terms of products.

It does say it will be showcasing ‘smart homes, autos, entertainment and more’.

The theme for this year’s show is ‘human security’, which refers to basic human rights such as access to food and health care.

‘We were approached by The World Academy of Art and Science, which has been working with the United Nations for a long time on human security,’ Kinsey Fabrizio, senior vice president at CTA, told Associated Press.

‘They wanted CES to really use this theme because our exhibitors are showcasing how they’re solving some of these big global challenges with technology.’

Fabrizio also said the metaverse will be ‘a key theme’ shared and immersive virtual experiences, while there will be a dedicated part of the show floor for Web3. 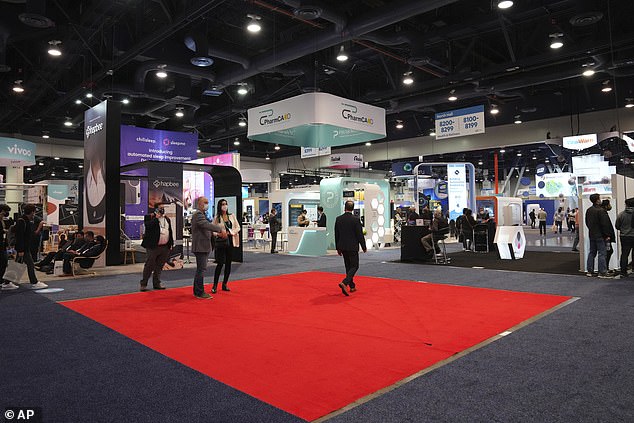 Web3 is a word for the third stage of evolution of the World Wide Web, incorporating blockchains, digital currencies, non-fungible tokens and more.

CES 2022 ended one day earlier than planned and many companies, including Amazon, Google and Meta, pulled out of attending in-person.

CES 2022 saw a 70 per cent drop in in-person attendance amid the spread of the Omicron variant.

The one before that was held virtually, replacing in-person displays and meet and greets with video streams and chats.

Bertone is back! Italian car runs on fuel made out of plastic waste

A robotic cat that nips at your fingers, a smart bulb that can monitor your health and a suit designed to put you in the metaverse are among thousands of products revealed at CES 2022.

One of the biggest sections of the 2022 show is transportation, with an increasing focus on electric and autonomous vehicles.

As well as consumer electronic devices, new vehicles on show included a prototype electric SUV by Sony, and a LiDAR based breaking system.

Meanwhile, US startup Sengled unveiled a smart lightbulb that makes use of radar sensors and bluetooth to provide health tracking information on people in a room.

Hyundai revealed details of an interactive and partly virtual future it calls ‘metamobility,’ where a variety of robotic devices interact with humans to provide a broad range of mobility services.