Experts warn central U.S. should prepare for devastating magnitude 7 earthquake that could hit Missouri fault line at any time as ‘fear of the big one’ in California remains

Parts of the central U.S. are at risk of a devastating magnitude 7 earthquake within the next 50 years, experts are warning, with added urgency due to what they say is a sense of ‘complacency’ in those areas.

Experts have been predicting a magnitude 7 earthquake in the areas surrounding the New Madrid fault line in Missouri for decades. It covers an area including Memphis, Tennessee, as well as St. Louis, Indianapolis and Little Rock, Arkansas.

Despite 45 million people living within the danger zone, warnings have largely been ignored, said Robbie Myers, the emergency management expert from the region.

The last major earthquakes from this fault happened in 1811 and 1812, centered near the town of New Madrid, Missouri. The quake reportedly managed to ring church bells as far away as South Carolina, causing farmland to sink into swamps and the Mississippi River to flow backward, among other strange occurrences.

Myers, director of emergency management for Butler County, Missouri, told AP the biggest problem is complacency, as it is over 100 years since the last quake.

If it were to hit today, he said thousands of people could potentially die, bridges crossing the Mississippi River could fall, major highways including Interstate 55 could buckle while oil and gas pipelines could break, causing nationwide disruptions.

Few residents of the area are concerned about earthquakes – which are traditionally considered a West Coast phenomenon in the U.S. 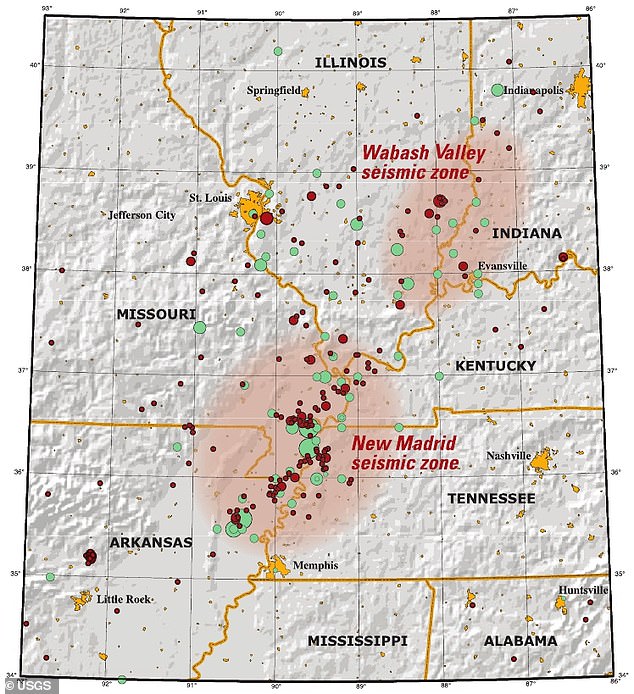 Central parts of the U.S. are at risk of a devastating magnitude 7 earthquake within the next 50 year, experts have warned. The area most at risk is listed in red on this U.S. Geological Survey map 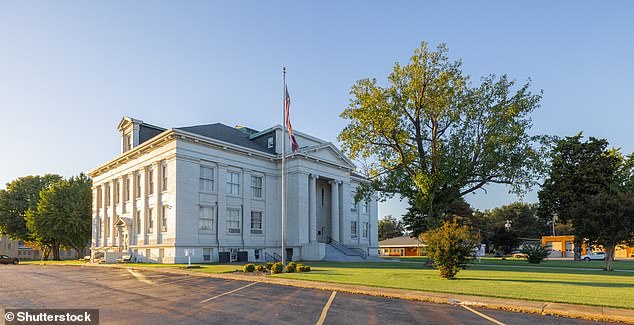 Experts have been predicting a magnitude 7 earthquake in the areas surrounding the New Madrid (pictured) fault line in Missouri for decades. It covers an area including Memphis, Tennessee, as well as St. Louis, Indianapolis and Little Rock, Arkansas

But hundreds of emergency managers, transportation leaders, geologists and others gathered Thursday in St. Louis to discuss ways to improve preparations, looking at areas that have put procedures in place ‘just in case’ it happens.

Most of the earthquake preparation in the U.S. has so far have been focused on California, which experts say is about 80 years overdue for ‘The Big One’, a massive earthquake where tectonic plates slide past each other along the 800-mile long San Andreas fault.

This focus on California has made it harder for experts in Missouri to convince officials and the public to be prepared. When you add the fact that the last quake in Missouri was 100 years ago, they say, things get harder still.

Researchers have also long debated just how much of a hazard New Madrid poses, with some earlier studies suggesting the fault was ‘dead’. The US Geological Survey, however, says this isn’t the case, and still predict a major quake.

In 1811 and 1812, it unleashed a trio of powerful jolts – measuring 7.5 to 7.7 – that rattled the central Mississippi River valley. The death toll is unknown, but experts don’t believe there were mass casualties because the region was sparsely populated. 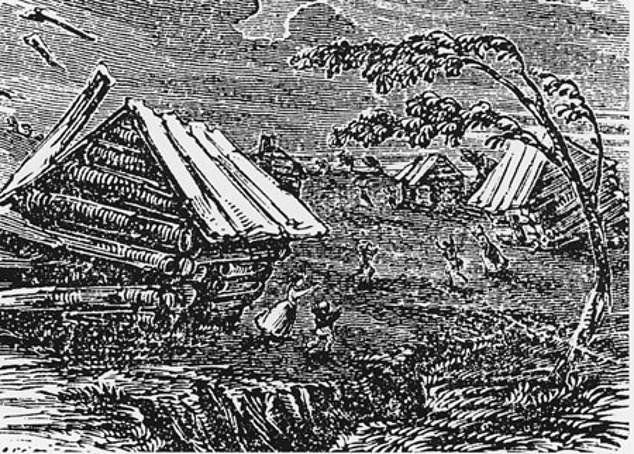 The last major earthquakes from this fault happened in 1811 and 1812, centered near New Madrid in Missouri, ringing church bells as far away as South Carolina, causing farmland to sink into swamps, and make the Mississippi River to flow backward 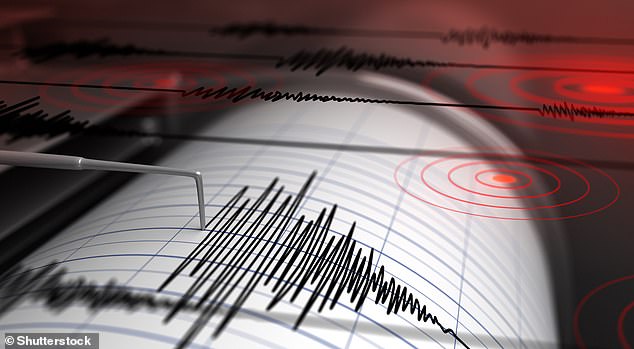 Despite 45 million people living within the danger zone, warnings have largely been ignored, said Robbie Myers, emergency management expert from the region

Unlike California’s San Andreas and other faults that occur along boundaries of shifting tectonic plates, New Madrid is less understood since it’s in the middle of the continent, far from plate boundaries.

Experts also predict the chance of a magnitude 6 earthquake at as much as 40 percent by 2050. Smaller – but still potentially devastating.

This will cause a bigger problem today, due to an increase in population. In Missouri alone the population has increased from 383, 702 in 1810, to over six million today.

The last time there was major attention paid to this fault line was in the 1990s, when climatologist Iben Browning said there was a 50-50 chance of a massive earthquake happening on December 3, 1990. Media arrived, but the quake ultimately didn’t happen. 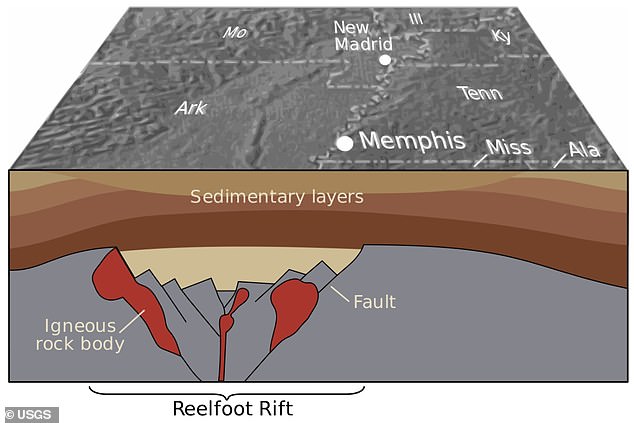 If it were to hit today, in addition to thousands of deaths, bridges crossing the Mississippi River could fall, major highways including Interstate 55 could buckle, and oil and gas pipelines could break, causing nationwide disruptions, experts said 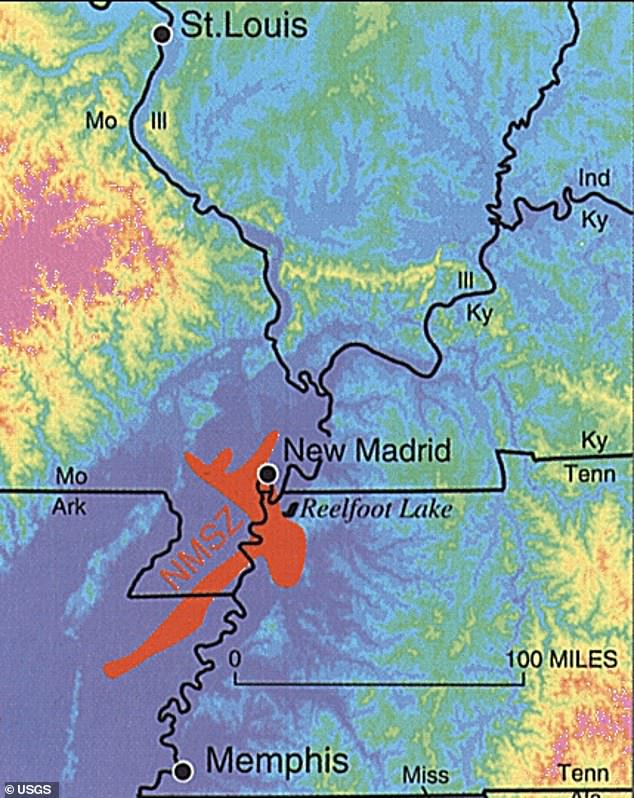 Most major U.S. earthquakes happen on the West Coast, where people in California have been preparing for the ‘Big One’ for years. Experts warn a sense of ‘complacency’ in the central U.S. (pictured) may complicate recovery efforts

It stretches out to the southwest from New Madrid, Missouri.

It triggered the 1811–12 New Madrid earthquakes, felt for hundreds of miles in each direction.

Experts predict it could have the potential to trigger a magnitude 7 earthquake in the next 50 years.

This could lead to devastation, including destruction of homes, buildings and infrastructure.

The 150-mile-long seismic zone, stretches southward from Cairo, Illinois; through Hayti, Caruthersville, and New Madrid in Missouri; through Blytheville into Marked Tree in Arkansas.

It also covers a part of West Tennessee, near Reelfoot Lake, extending southeast into Dyersburg.

The Midwestern risk is ‘similar to the chances in California,’ said Thomas Pratt, Central and Eastern U.S. coordinator for the USGS Earthquake Hazards Program.

With roads and bridges compromised, emergency aid might be cut off from the impacted areas due to road and bridge damage.

‘If all eight states are affected there’s going to be a fight for resources,’ Clutter said.

Memphis, Tennessee, is within the zone. St. Louis, Indianapolis and Little Rock, Arkansas, are close enough for concern. In total about 45 million people live within the area that will be most impacted.

Some communities have been more proactive than others in their preparations.

In Memphis, the Interstate 40 bridge into the city received a $260 million retrofit to protect against a strong earthquake. Building codes were upgraded a decade ago to require stricter construction standards with earthquake risk in mind.

In St. Louis, designers say the 29-story apartment tower overlooking Busch Stadium that opened in 2020 will sway rather than collapse in the event of a big quake.

The Gateway Arch, completed in the 1960s, would sway up to 18 inches if an earthquake rumbles.

Meanwhile, a new St. Louis bridge over the Mississippi River that opened in 2014 was built with foundations all the way into bedrock to keep it steady and standing in the event of a quake. The region’s busiest river crossing, the Poplar Street Bridge, has been retrofitted for extra protection.

Still, most homes and commercial buildings within the region aren’t earthquake ready, according to emergency planners in the region.

‘Many places have no building codes, and very few of the existing building codes require earthquake-resistant design,’ a fact sheet from the American Geosciences Institute states.

‘We always encourage people to look at their insurance coverage, look at things like your utilities, if you have a hot water heater, making sure it’s strapped,’ said Sarah Russell, commissioner of emergency management for St. Louis.