Blasting the sky with a car-sized LASER could divert lightning away from airports and power stations, scientists say

Blasting the sky with a giant laser could divert lightning away from airports and nuclear power stations.

Lightning strikes the ground in Britain alone about 300,000 times a year, with 30 to 60 people struck by lightning and around three dying.

But the greatest threat is the damage lightning strikes can do to power stations, with one in 2019 causing the UK’s worst blackout in a decade, cutting off 1.1 million people.

Now a laser the size of a large car could protect against these acts of god in the future, by attracting bolts of lightning away from buildings. 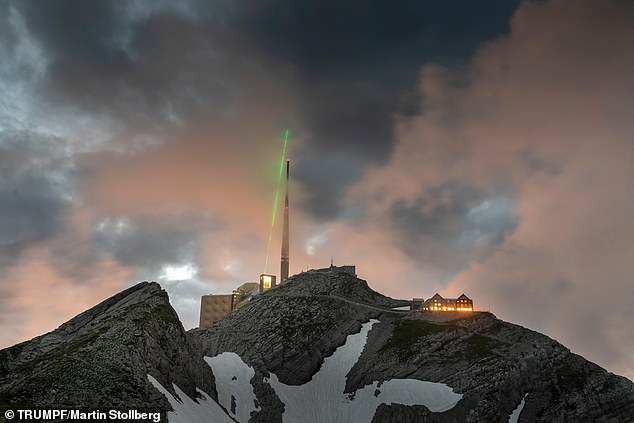 Scientists fired 1,000 pulses of laser light a second from a machine 26 feet long, weighing more than three tons, sending the beams into the atmosphere above a tower in Switzerland which is struck by lightning around 100 times a year.

Over more than six hours of using the laser during thunderstorms between June and September last year, researchers were able to divert four lightning strikes.

Lightning takes the path of least resistance before hitting the ground. 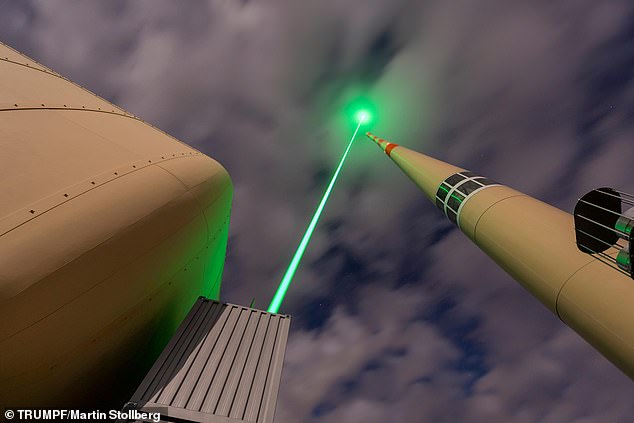 Scientists fired 1,000 pulses of laser light a second from a machine 26 feet long, weighing more than three tons, sending the beams into the atmosphere above a tower in Switzerland which is struck by lightning around 100 times a year

But laser pulses can attract lightning in the same way, by charging the air to make it conduct electricity.

This traps lightning above a building, and the lightning then moves through the charged air, before falling harmlessly to the ground.

Traditional lightning rods do a similar job, but experts say they can only divert lightning as far away as they are tall – with a 30-foot rod, for example, only able to guide lightning 30 feet away. 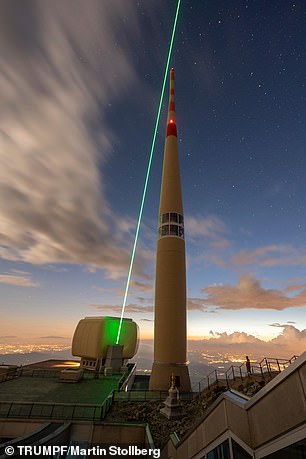 Scientists hope lasers, while currently extraordinarily expensive, might be the future for protecting important infrastructure including nuclear power stations, wind farms and airports

Scientists have been working on doing this with lasers for more than 40 years, but this is the first time it has been proven outside the laboratory, according to the new study.

Professor Jean-Pierre Wolf, who led the team behind the breakthrough, from the University of Geneva, said: ‘Seeing the lightning being diverted by the laser pulses was very emotional.

‘It comes four years after my own house was actually struck by lightning, breaking the chimney, the windows and leaving my wife without electricity.

‘I was at a conference discussing this research, so it may have been the lightning’s revenge.’

Worldwide, lightning causes as many as 24,000 deaths a year.

The lightning rod is said to have been invented by US President Benjamin Franklin in the 18th century – made from conductive metal to attract lightning and guide it safely to the ground.

But scientists hope lasers, while currently extraordinarily expensive, might be the future for protecting important infrastructure including nuclear power stations, wind farms and airports.

The study, published in the journal Nature Photonics, showed lightning could be diverted by more than 50 metres using two high-speed cameras.

Researchers also used antennae to track the path of the lightning using the electromagnetic radiation it produces.

Laser pulses, which form long strings in the atmosphere, ionise nitrogen and oxygen molecules in the air to charge it and attract lightning.

Lasers also appear to prevent lightning from happening in the first place, as they give the air a negative electric charge so that it can travel up to the positively charged bottom of a cloud and neutralise the charged particles which might otherwise trigger lightning bolts.

WHY DOES LIGHTNING STRIKE?

When this charge separation is large enough a violent discharge of electricity happens — also known as lightning. 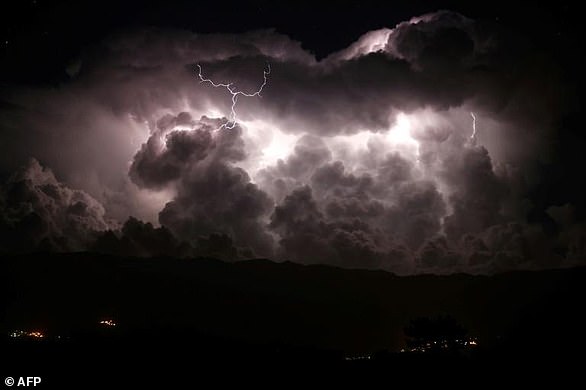 ‘Lightning is a major hazard that claims many lives every year,’ the UN’s World Meteorological Organization says

Such a discharge starts with a small area of ionised air hot enough to conduct electricity.

This small area grows into a forked lightning channel that can reach several miles in length.

These charges passes from the positive end of the channel to the negative end another during a lightning flash, causing the charge to be released.