Cavemen of Canterbury: Some of Britain’s earliest humans lived in KENT up to 620,000 years ago, analysis of ancient flint tools reveals

Some of Britain’s earliest humans lived in Kent up to 620,000 years ago, a new study has revealed.

Scientists have finally dated ancient flint tools that were found 100 years ago in Fordwich, a market town just northeast of the ancient city of Canterbury.

The collection of artefacts – which includes handaxes and ‘scraping and piercing implements’ –  date back somewhere between 560,000 and 620,000 years ago.

These tools were used by Homo heidelbergensis, an ancestor of Neanderthals, who at the time occupied southern Britain when it was still attached to Europe. 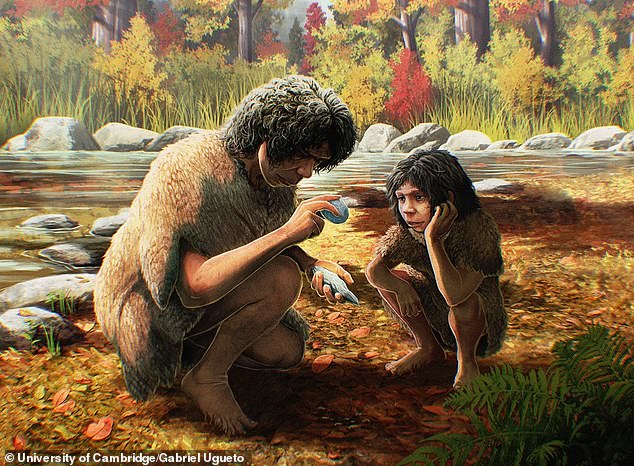 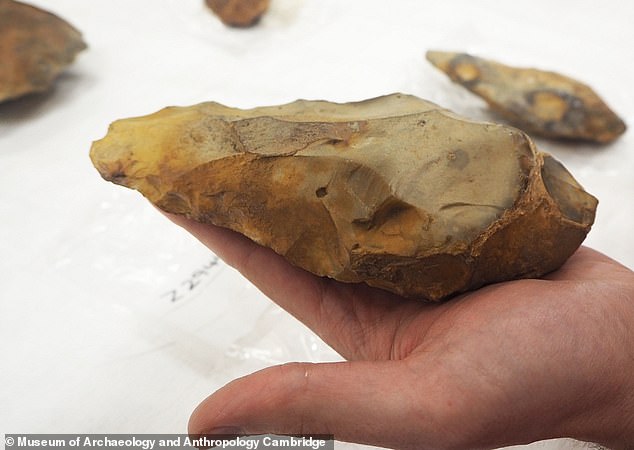 When the tools were made, Britain was not an island but instead represented the north-western peninsular of the European continent.

This allowed individuals to move around a much larger landscape than the current Kent coastline allows.

So at the time, Fordwich was potentially only visited by Homo heidelbergensis during warmer summer months.

Additionally, recent excavations at Fordwich have also identified new flint artefacts, including the very first ‘scrapers’ to be discovered there.

‘The diversity of tools is fantastic,’ said Dr Alastair Key at the University of Cambridge, who directed the recent excavation.

‘In the 1920s, the site produced some of earliest handaxes ever discovered in Britain.

‘Now, for the first time, we have found rare evidence of scraping and piercing implements at this very early age.’

Located in an ancient riverbed, the Fordwich site was originally discovered in the 1920s during through industrial quarrying.

At the time, local labourers unearthed hundreds of handaxes, most of which are now in the British Museum in London, and ‘a large number of amorphous flakes’ with sharp edges.

But when exactly these artefacts had originated had been a mystery, due to a lack of accurate dating techniques.

For this study, the researchers dated the stone tool artefacts using the infrared-radiofluorescence (IR-RF) dating technique.

Homo heidelbergensis lived in Europe, between 650,000 and 300,000 years ago, just before Neanderthal man.

Homo heidelbergensis, shares features with both modern humans and our homo erectus ancestors.

It was the first early human species to live in colder climates, and had a ­­­short, wide body adapted to conserve heat.

It lived at the time of the oldest definite control of fire and use of wooden spears, and it was the first early human species to routinely hunt large animals.

This early human also broke new ground; it was the first species to build shelters, creating simple dwellings out of wood and rock.

IR-RF determines the point at which feldspar sand-grains were last exposed to sunlight, thereby establishing when they were buried.

This makes Fordwich one of the earliest known Palaeolithic sites in northern Europe.

Researchers are now planning future excavation work at Fordwich, which they hope will reveal more about the behaviour of H. heidelbergensis.

It’s already known the species was a hunter gatherer that ate a diverse set of animals, such as deer, horse, rhino and bison, as well as plants and tubers.

Many of the Fordwich tools found were likely used to process carcasses for food, as well as preparing hides for sheltering against cold weather.

‘Scrapers, during the Palaeolithic, are often associated with animal hide preparation,’ said study author Dr Tomos Proffitt from the Max Planck Institute of Evolutionary Anthropology, who analysed the artefacts.

‘Finding these artefacts may therefore suggest that people during this time were preparing animal hides, possibly for clothing or shelters.

‘The range of stone tools, not only from the original finds, but also from our new smaller excavations suggest that hominins living in what was to become Britain, were thriving and not just surviving.’

A collection of footprints at Happisburgh in Norfolk dated to 840,000 or 950,000 years ago, currently represent the oldest evidence of hominins occupying Britain.

Early humans are known to have been present in Britain during this period, but these early visits were fleeting. 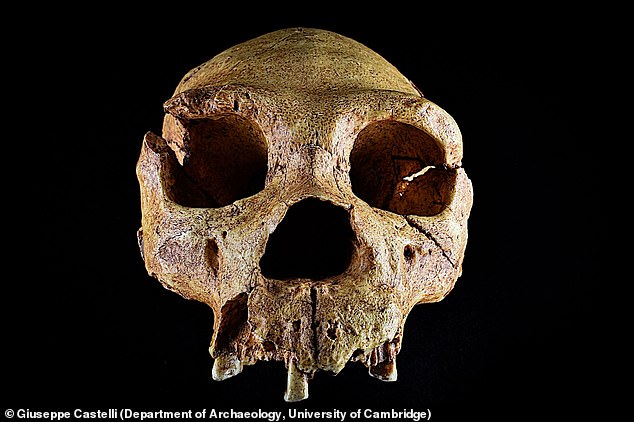 Fossil skull cast of Homo heidelbergensis, an ancestor of Neanderthals. This skull was not found in the recent Cambridge-led excavations 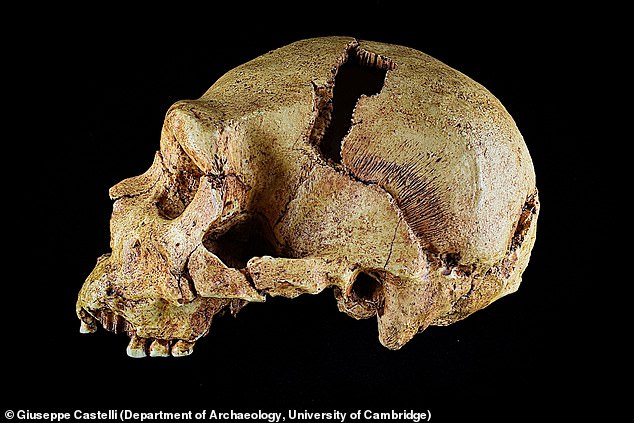 Cold glacial periods repeatedly drove populations out of northern Europe, and until now there was only limited evidence of Britain being recolonised during a period of warming somewhere between 560,000 and 620,000 years ago.

Several sites in Suffolk are believed to display tools from this time, but these artefacts come from contexts where accurate dating methods are difficult to use.

Overall, the new study demonstrates the historical importance of Fordwich, of whom few Palaeolithic specialists outside Britain seem to have heard of, according to the researchers.

‘Fordwich is revealed to be more diverse than previously known, with handaxes, cores, flakes, scrapers, and other retouched tools now evidenced,’ the experts say in their paper, published today in the journal Royal Society Open Science.

‘Fordwich can now begin to take its place among the most important of early Acheulean sites in north-west Europe.’

They were later joined by humans, who entered Eurasia around 48,000 years ago. 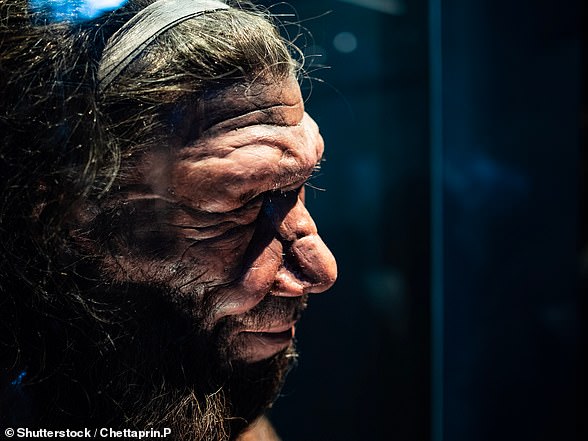 Neanderthals were a species that lived alongside humans tens of thousands of years ago and were very similar in appearance and size but were generally stockier and more muscular (Pictured: A replica of a male Neanderthal head in London’s Natural History Museum)