Researchers from the University of Lincoln looked at the value of training dogs with and without remote electronic collars compared to positive reinforcement.

More than 60 dogs with ‘off-lead behavioural problems’ were involved in the study that focused on a dogs’ ability to respond to commands ‘come’ and ‘sit’.

The team found that trainers using positive reinforcement saw a significantly better response to these commands than those using the electric shock collars.

The Kennel Club welcomed the findings, saying electric shock collars have no place in dog training and should be banned to stop the animals from suffering.

A government spokesperson said they were committed to banning electric dog collars from use in training ‘in due course’. 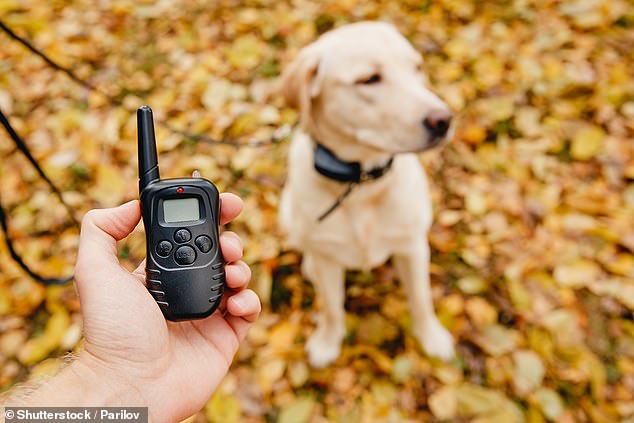 Opponents of E-collars argue that the devices don’t work well and actually pose an increased risk of negative outcomes, including making the dog less affectionate.

In contrast, advocates for remote E-collars argue they can be used to modify behavior through negative reinforcement and are a valuable training aid.

Collar manufacturers suggest one advantage is that they enable handlers to suppress dogs’ negative behaviour even at a distance.

The new study found that when compared to positive reinforcement, electric collars are not effective at training recall and obedience.

‘These findings refute the suggestion that training with an E-collar is either more efficient or results in less disobedience, even in the hands of experienced trainers,’ the authors of the study explained.

‘In many ways, training with positive reinforcement was found to be more effective at addressing the target behavior as well as general obedience training.

‘This method of training also poses fewer risks to dog welfare and quality of the human-dog relationship.

‘Given these results we suggest that there is no evidence to indicate that E-collar training is necessary, even for its most widely cited indication.’

For the study by the Lincoln team, 63 dogs were split into three training groups and given up to 150 minutes of training over five days to improve recall and obedience.

The first group saw dog trainers nominated by the manufacturers use electric shock collars – the other two groups acted as a ‘control’ with no shock collars used.

The first control group involved the same trainers following the practices they would apply when not using electric stimuli and the other involved positive reinforcement.

Each dog had some off-lead behavioural problems and trainers were asked to specifically focus on how well they respond to the commands ‘sit’ and ‘come’.

They looked at how many times the command had to be given before the dog did as it was asked, and how long it took for the animal to obey the command it was given.

The positive reinforcement group achieved significantly better responses to both ‘sit’ and ‘come’ commands after a single instruction in the allocated time.

These dogs also took much less time to obey the commands than the ones wearing electric shock collars, according to the study’s authors. 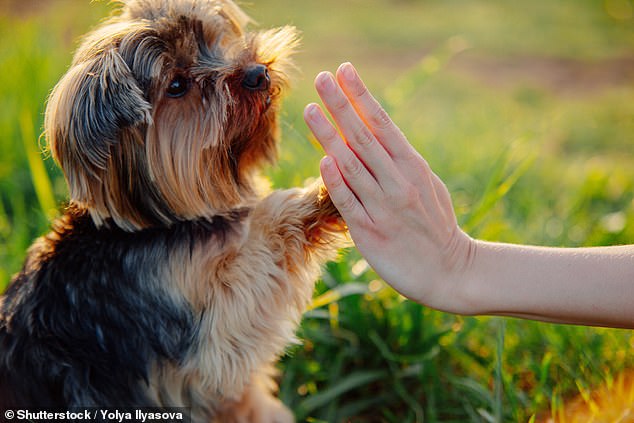 The Kennel Club welcomed the findings, saying electric shock collars have no place in dog training, adding the devices should be banned to stop dogs from suffering

Holly Conway, Head of Public Affairs at the Kennel Club, said this provides clear evidence that dogs can be more effectively trained without these devices.

‘The Kennel Club, along with veterinarian bodies and other welfare organisations, has long campaigned for a ban on electric shock collars and this study proves that positive reward training is all that dogs need,’ she said.

‘The findings are clear and should be reviewed by the government immediately to stop the unnecessary suffering of dogs.’

The use of E-collars in dog training appears to be declining in the UK, from an estimate of 6 per cent of all pet dogs in 2012 to around 1 per cent in 2019.

This decrease may reflect current government policy on the devices in Wales where they are already banned and when in Scotland where they are not condoned in dog training and use may lead to punishment.

There is also restrictive legislation proposed for England and there are a number of high-profile campaigns against their use.

Nevertheless, these figures while appearing relatively low still suggest about 100,000 dogs in the UK are subject to E-collar use, the study authors said.

‘We conclude that dog training with these devices causes unnecessary suffering, due to the increased risk of a dog’s well-being is compromised through their use, without good evidence of improved outcomes,’ the team explained.

The Department for Environment, Food and Rural Affairs said they had a public consultation into electric training collars with 7,000 responses.

‘We’re a nation of pet lovers and are a world leader in the protection of animals,’ a spokesperson for the department said.

‘Following our consultation, we’re committed to banning electric training collars for cats and dogs and will put it into law in due course.’

The findings have been published in the journal Frontiers in Veterinary Science.