The scale of one of the largest wildfires on record burning in Los Angeles County has been revealed in new imagery from NASA.

The Bobcat Fire has scorched some 114,000 acres since the beginning on Sept. 6 and exploded in size as it burned through the Angeles National Forest.

The blaze is now 62% contained, but a red flag warning is in effect for Monday due to critical fire weather conditions with gusty winds and low humidity that could fan the flames.

The blaze has generated tremendous amounts of smoke that has choked the greater Los Angeles area with poor air quality. 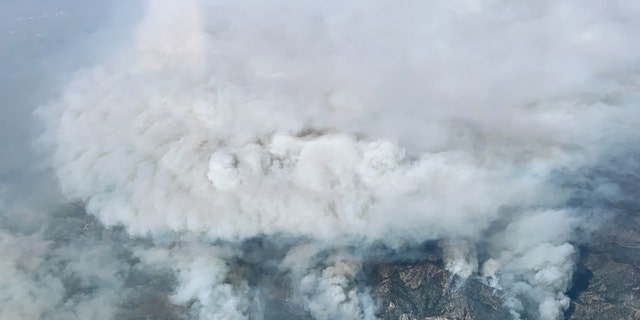 More than two dozen homes were destroyed or damaged as the blaze burned through the Juniper Hills and Littlerock neighborhoods near Palmdale, but the blaze has mostly worked its way through the national forecast.

Fire experts at NASA monitored the blaze from satellite sensors including the Operational Land Imager (OLI) on the Landsat 8 satellite, which revealed the burn scar from the blaze. 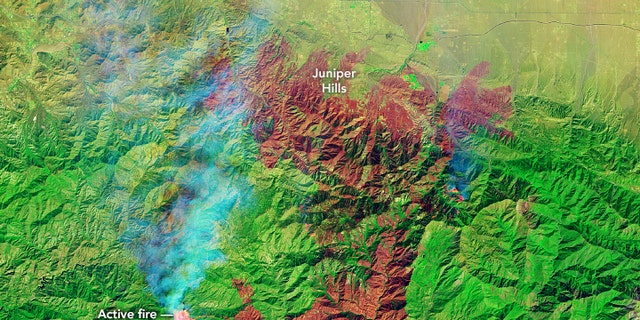 The image released by NASA also shows where the active fires are burning (shown in bright red), scarred land that is burning (seen in darker red), intact vegetation (pictured in green), and where urban development is located.

BOBCAT FIRE IN CALIFORNIA BECOMES ONE OF LARGEST IN LOS ANGELES COUNTY HISTORY, WHIPS UP 'SMOKENADO'

Over 70 large wildfires are currently burning across the West, including a new wildfire that broke out Sunday in Napa County, prompting evacuations of hundreds of homes and a hospital. 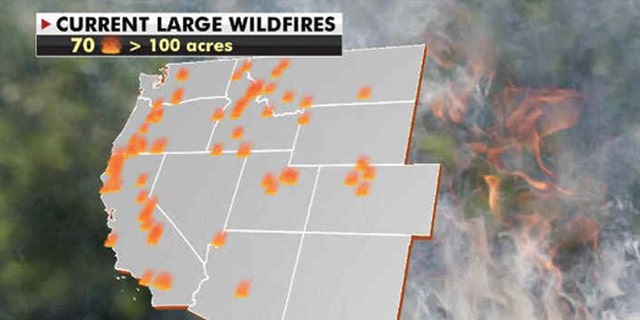 A look at the number of wildfires currently burning across the West Coast as of Sept. 28, 2020.
(Fox News)

Numerous studies in recent years have linked bigger wildfires in America to global warming from the burning of coal, oil and gas, especially because climate change has made California much drier. A drier California means plants are more flammable. 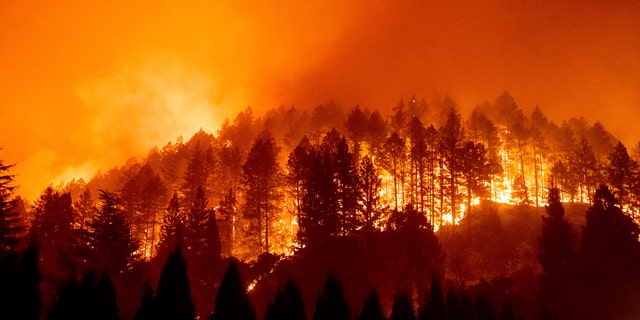 “Four of the five largest fires ever recorded in California were burning at the same time as the Bobcat fire,” said Natasha Stavros, a wildfire expert with NASA’s Jet Propulsion Laboratory. “Climate change contributes to megafires like these by heating fuels up, drying them out, and making them more flammable.”

So far this year, more than 8,100 California wildfires have scorched 5,780 square miles, destroyed more than 7,000 buildings, and killed 26 people.