Eye of the space storm: Calculating the speed of solar eruptions could help protect astronauts and satellites from deadly radiation, scientists claim

Knowing the speed of solar eruptions when they reach the Earth can help space weather forecasters protect astronauts and satellites, study claims.

Currently forecasters focus on the size of coronal mass ejections coming from the Sun, rather than their speed, when warning of any possible impact they might have.

Coronal mass ejections are caused by huge eruptions of material from the Sun, travelling through interplanetary space and disturbing the Earth’s magnetic field

Researchers from the University of Reading found that including speed lets forecasters provide a more accurate warning system with fewer ‘false positives’.

The team say that this more accurate early warning system would help operators of critical infrastructure such as satellites know if they need to take evasive action. 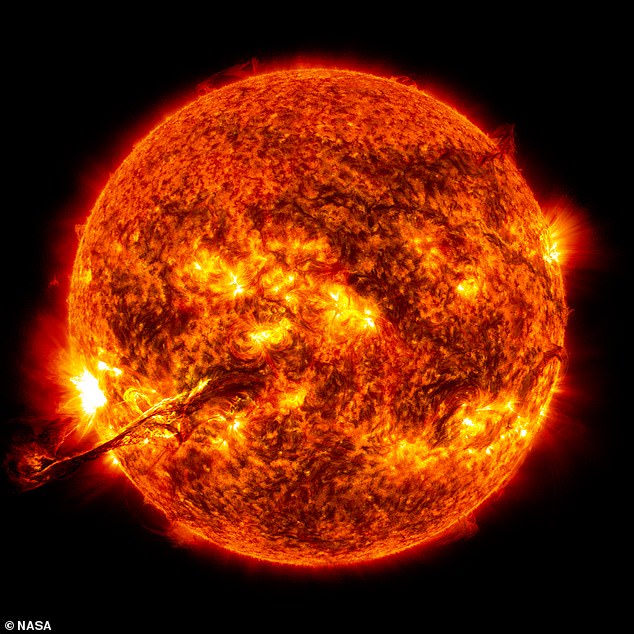 Currently forecasters focus on the size of coronal mass ejections coming from the Sun, rather than their speed, when warning of any possible impact they might have

This action includes switching off systems to protect them – something that can be costly, and so accurate information ahead of turning it off is vital.

They could also warn astronauts on board the International Space Station or in future when travelling to the Moon, when they need to shelter in shielded areas.

Using solar imagers to measure the speed of CMEs close to the Sun, the team found it was possible to forecast the arrival time of the storms at the Earth.

Professor Mathew Owens, space scientist at the University of Reading’s Department of Meteorology, said no all coronal mass ejections trigger a severe storm.

He said this means just by looking at the sun for activity, we get a lot of `false alarms’ where action is taken that isn’t needed.

‘While it is better to be safe than sorry, especially with the health of astronauts, sometimes the costs of repeatedly taking unnecessary action to protect a satellite network could prove more costly than the potential space-weather damage itself.’

That is what prompted the team to look at ways to create a more accurate early warning system, and realise ‘speed’ played a big part.

Space weather is listed as one of the biggest threats to the UK and many other countries, due to the possibility that computers, communication networks and electricity systems could be disrupted.

Billions of dollars are currently being spent on new spacecraft and systems to better forecast and measure eruptions when they occur.

In the new study, published in the scientific journal Space Weather, the researchers outline a new way to quantify the value of knowing CME arrival time.

They show that the speed of the CME at Earth is a useful extra piece of information that can be used to reduce the number of false alarms.

The scientists say their new finding should help to guide future efforts to improve space weather forecasts, helping to protect critical infrastructure and the health of astronauts in the future.

The most severe space-weather is driven by huge eruptions of solar material, known as coronal mass ejections (CMEs), travelling through interplanetary space. 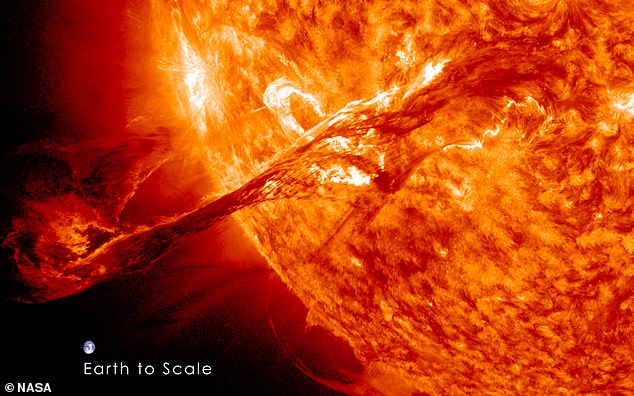 The worse and most severe of them can disrupt technology and put lives at risk.

‘Not all CMEs trigger a severe storm, thus CME arrival time forecasts will lead to lots of ‘false alarms’ wherein action is taken when it is not needed,’ the authors wrote.

In some cases unnecessary action to protect satellites, especially if it happens regularly, could prove more costly than any space weather damage.

In some situations, this may be acceptable; better safe than sorry. In others, repeatedly taking unnecessary action will

They say that by knowing the accurate arrival time, it’s speed and intensity will help reduce the number of false alarms and unnecessary preventative action.

However, scientists say such warnings could be more useful if combined with more sophisticated information about the severity of a storm when it hits Earth.

The findings have been published in the journal Space Weather.

Solar storms, or solar activity, can be divided into four main components that can have impacts on Earth:

While these may seem dangerous, astronauts are not in immediate danger of these phenomena because of the relatively low orbit of manned missions.

However, they do have to be concerned about cumulative exposure during space walks.

This photo shows the sun’s coronal holes in an x-ray image. The outer solar atmosphere, the corona, is structured by strong magnetic fields, which when closed can cause the atmosphere to suddenly and violently release bubbles or tongues of gas and magnetic fields called coronal mass ejections

The damage caused by solar storms

Solar flares can damage satellites and have an enormous financial cost.

Very large flares can even create currents within electricity grids and knock out energy supplies.

When Coronal Mass Ejections strike Earth they cause geomagnetic storms and enhanced aurora.

A large influx of energy could flow into high voltage power grids and permanently damage transformers.

This could shut off businesses and homes around the world.