Bryan Sykes, an Oxford geneticist, made his name as a swashbuckling public intellectual by studying the DNA of an alpine iceman, taking on the ethnographer Thor Heyerdahl’s theory about the peopling of Polynesia, and analyzing samples said to come from yetis, almas and sasquatches but which, he showed, actually came from bears, pigs and people — a disappointing result for Bigfoot hunters that didn’t keep one of them from naming him cryptozoologist of the year in 2013.

And it all started with a visit to the National Hamster Council.

A researcher specializing in inherited bone diseases who was drawn into the burgeoning field of ancient DNA in the late 1980s, Dr. Sykes had a hunch that mitochondrial DNA, which passes largely intact from mother to child, could be used to trace the deep origins of human populations. But he needed a way to test his hypothesis.

He remembered learning as a boy that Britain’s millions of pet hamsters were descended from a single female caught in the wild, in Syria. In 1990 he contacted the head of the hamster council, who put him in touch with thousands of owners. They gladly sent him samples from their pets’ stool, a DNA analysis of which showed that indeed they shared a common ancestor. Professor Sykes was right.

What followed was a whirlwind public life for an academic who had built his career in the lab but who soon became one of Britain’s best-known scientists, popularizing cutting-edge technology through TV appearances and best-selling books that gave millions of people access to their distant pasts.

His book “The Seven Daughters of Eve” (2001) captivated readers with the notion that almost all modern Europeans can trace their roots to one of seven women who lived from 10,000 to 45,000 years ago and who in turn descended from an African-born Eve — a somewhat fanciful construct that he quickly turned into the first successful direct-to-consumer genetic testing service, Oxford Ancestors.

“He did as much as anyone, if not more, to translate detailed scientific analysis in terms a general audience could understand,” said Henry Louis Gates Jr., the Harvard English professor and host of the TV show “Finding Your Roots.” “He pointed the way toward a revolution in genetics and genetics education.”

Dr. Sykes died on Dec. 10 in Edinburgh, said Ulla Ploughmand, his partner. She did not provide a cause.

Dr. Sykes was not the first scientist to explore the possibilities of extracting ancient DNA. But at a time, in the late 1980s, when genetic sequencing was still an infant technology requiring enormous sample sizes, and when no one could imagine getting enough material from thousand-year-old remains, he pioneered a shortcut: While every animal cell contains just a single copy of DNA within its nucleus, it contains hundreds or even thousands of mitochondria, which convert food into energy and contain their own, much simpler, DNA strands.

What’s more, unlike nuclear DNA, mitochondrial DNA passes virtually unchanged from mother to child, with a predictable rate of mutation that gave Dr. Sykes and other researchers a way to draw links between modern populations and ancient ones.

After the success of “The Seven Daughters of Eve,” which allowed him to buy a second home in Edinburgh and a powder-blue Mercedes convertible with the license plate 7DEVE, Dr. Sykes set aside most of his academic work in favor of a career popularizing genetics through TV programs and general-interest books at a time when phrases like “DNA sequencing” were not yet household words.

He demonstrated an almost preternatural sense for distilling complex science through narratives and high-profile stunts, like “Bigfoot Files,” a three-part series that ran on British TV in 2013 in which he assessed claims about some three dozen hair and skin samples sent to him by cryptozoologists, people on the hunt for legendary creatures like the Loch Ness Monster and the Abominable Snowman.

While his results were definitive and not in their favor, his conclusion was magnanimous. “Rather than persisting in the view that they have been ‘rejected by science’, advocates in the cryptozoology community have more work to do,” he wrote in a paper announcing his results. It was an encouraging statement that won him legions of fans among a section of the public that is often at odds with the scientific establishment.

“Bryan always wanted to be a gentleman scientist,” said Sue Foden, his first wife, in an interview. “He wanted science to be fun, and for people to enjoy.”

Bryan Clifford Sykes was born on Sept. 9, 1947, in Eltham, a suburb of London. His father, Frank Sykes, was an accountant. His mother, Irene (Clifford) Sykes, was a homemaker. He studied biochemistry at the University of Liverpool, received his Ph.D. from the University of Bristol and arrived at Oxford in 1973 to pursue a doctorate in science.

Dr. Sykes married Ms. Foden in 1978. They divorced in 1984 but remained close, and had a son, Richard, together in 1991. A second marriage, to Janis Wilson, also ended in divorce. Along with his son, he is survived by his brother, Nigel Sykes.

In 1990, while on a vacation in the Cook Islands, a motorcycle accident left him hospitalized for three weeks. He used the time to study the genetic history of the islands and became convinced that their original settlers came from Asia, not the Americas, as Thor Heyerdahl, the Norwegian adventurer and ethnographer, had famously claimed. 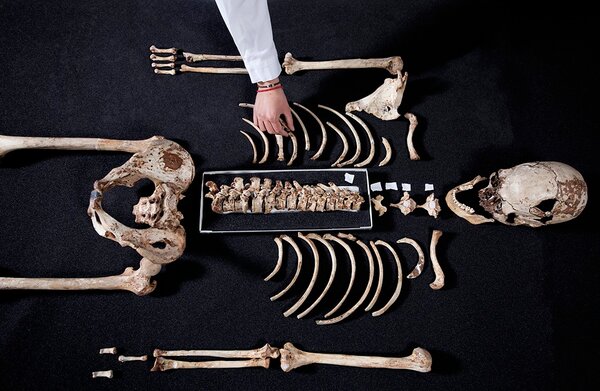 Back in his lab at Oxford, Dr. Sykes used the emerging technology of mitochondrial DNA to disprove Heyerdahl, winning acclaim among academics and Pacific Islanders who had long challenged the theory. Other headline-grabbing results followed. Using the DNA from Ötzi, a 5,000-year old mummy discovered in the Alps on the Austrain-Italian border, he located one of his descendants living in southern England. He went on to sequence the DNA of “Cheddar Man,” the oldest complete human skeleton in Britain, discovered in a cave outside the town of Cheddar, in southwest England, and found, to the news media’s delight, that one of the man’s descendants was a schoolteacher living nearby.

But Dr. Sykes’s celebrity rankled many in his field, who out of jealousy or professional caution or both accused him of simplifying or taking liberties with his underlying data.

“I wouldn’t say the University of Oxford opened its arms to it,” Ms. Foden said. “Some conservative scientists at the university thought it was second class.”

Dr. Sykes did make mistakes. In 2006 Oxford Ancestors declared that an accounting professor in Florida was a direct descendant of Genghis Khan, only to have another firm prove just weeks later that he was definitively not — an error that Dr. Sykes conceded but that nevertheless cast a pall over some of his methods.

And, over time, the field of genetics research moved on. By 2010, researchers were able to extract nuclear DNA samples from ancient specimens and sequence them, the results of which undermined many of Dr. Sykes’s central claims. Precisely because nuclear DNA gets mixed up with each generation, it can give a more nuanced story about the movement of human populations than the largely static picture provided by mitochondrial DNA.

So while Dr. Sykes’s work on mitochondrial DNA seemed to show a clear genetic lineage from Europeans thousands of years ago — including Cheddar Man and those seven daughters — to the present, with little evidence of migration or genetic turnover, nuclear DNA sequencing shows a stunning diversity, evidence that the hunter-gatherer populations of Paleolithic Europe were almost completely wiped out, genetically speaking, by neolithic farmers moving west from Asia.

“Now we know that in fact there was about 90 percent population replacement,” said David Reich, a geneticist at Harvard Medical School. “That picture of localization, presented in ‘The Seven Daughters of Eve,’ is actually quite deceptive.”

Still, Dr. Reich credits Dr. Sykes with paving the way for scientists like himself, who have found their work warmly received by a public eager to learn more about its past through DNA research.

“He wasn’t a snob about making the public a primary audience for his work, like a lot of us,” Dr. Reich said. “And it’s good not to be a snob.”