British firm is given £250,000 by the European Space Agency to figure out how to extract oxygen from moon rocks and help create a permanent human colony on the lunar surface

Up to £250,000 has been awarded to a British firm by the European Space Agency (ESA) with the explicit aim of extracting oxygen out of lunar rocks.

Metalysis, based in Rotherham, currently specialises in getting precious metals out of minerals for use in electronics.

As part of its process it uses electricity to strip away oxygen atoms that are bound to the metal in its natural state.

Currently, the oxygen, when released, is a by-product and is left to seep into the air, with the metal the precious commodity.

But if applied to the lunar rocks, the roles are reversed and the oxygen created is the prized goal, with the freed up rock a bonus.

Being able to create oxygen in space has long been a goal of astronauts, as it opens up a host of possibilities for long-term space exploration. 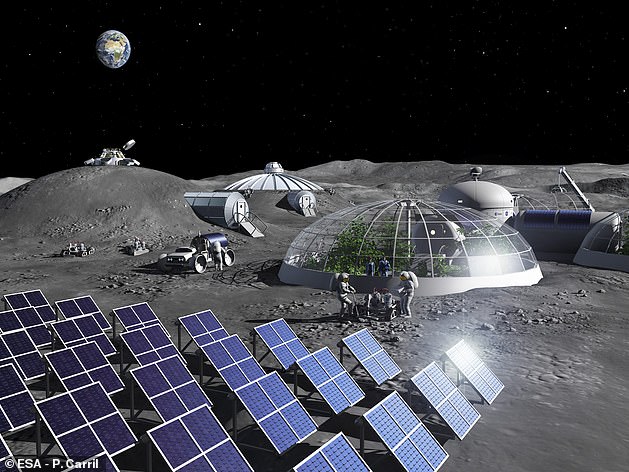 ESA has awarded up to £250,000 in funding to the Rotherham company. It hopes to one day make a self-sustaining plant for the moon to provide a constant source of oxygen for colonisation missions 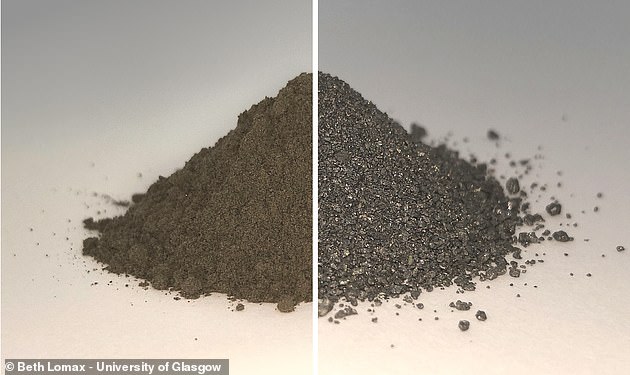 Lunar rocks (pictured left, a simulated material before the experiment) is made up of 40–45 per cent oxygen by weight, its single most abundant element. After it has been processed in the experiment (right) it is converted into a usable metal alloys and oxygen is released

It is believed moon rocks can be almost half oxygen by weight. Currently, the ISS requires 2.5kg (4.85lbs) of oxygen a day to sustain its astronauts.

Pure oxygen can be used to create breathing air, water and rocket fuel, so the ability to source the raw material in space removes the need to take enormous resources in the rockets.

This will allow astronauts to launch into space on cheaper, lighter rockets and then manufacture what they need to survive when they arrive.

Once this is established, it will help the moon transform into a lunar base which NASA, ESA and other space agencies can use for longer missions deeper into space.

The UK Space Agency today announced Metlaysis as the winner of the funding.

‘In the future, if we want to travel extensively in space and set up bases on the Moon and Mars, then we will need to make or find the things required to support life – food, water and breathable air,’ said Sue Horne, head of space exploration at the UK Space Agency.

‘The involvement of Metalysis in a programme that aims to do just that, by producing oxygen on a lunar setting, will showcase the UK’s space credentials on the world-stage and help unlock breakthroughs that bring future space exploration a step closer.’

Metalysis’s method is tried and tested on Earth, based on a chemical reaction school children learn today.

The valuable metals they target are called titanium and tantalum, which are used in aerospace and smartphones.

These metals are trapped in minerals called ilmenite and columbite, respectively and an initial purification process produces titanium dioxide and tantalum pentoxide.

Then, this metallic compound is thrust into a solution of calcium chloride and a graphite electrode is inserted into the liquid as well.

An electrical current passes between the two electrodes, from the positive electrode (the metal compound) to the negative graphite electrode.

As this happens, the chloride ions in the liquid have a positive charge and are then attracted to the negative metallic electrode, with the oxygen released and sent to the positive electrode.

Under the current process it is simply left to escape, but Metalysis will now seek to tweak their current process and apply it to moon rocks with the goal of catching the gas.

The goal of creating life-critical resources on the moon recently received a boost with the discovery of water on the sunlit surface of the moon.

The revelation means it is possible water is easily accessible and not just in the deep, permanently shadowed craters of the south pole, as was previously thought.

A separate piece of research found these so-called ‘cold traps’, which are always in shadow, may contain up to 15,000 square miles (40,000 square km) of water.

The discovery means future missions to the moon could be prolonged by making use of these water molecules which are scattered across the moon.

Astronauts could use the natural resource, which may have arrived via comets or solar winds, and turn it into oxygen or drinking water to sustain a future colony.

Previously, researchers speculated water was only present in cold traps and were unable to prove it was water and not a similar molecule called hydroxyl, which is found in drain cleaner.

HOW CAN OXYGEN BE CREATED FROM WATER?

Water is made of two elements: hydrogen and oxygen.

These are bonded together and can often be manipulated in chemical reactions.

Water is added to many different processes, in a process called hydrolysis – the addition of water.

Electrolysis is a similar process, which involves the addition of an electrical current through a water sample that contains a soluble material, known as an electrolyte.

This process then provides energy to the water molecules, and with enough applied energy, the bonds that keep the oxygen joined to the hydrogen can be broken.

This is often done in a school laboratory by placing two electrodes (or a battery) in a small flask of impure water, applying a current and capturing the gas created.

This gas is then lit with a match and produces a squeaky pop, a telltale sign of hydrogen being present.

This has yet to be scaled up on Earth, with the infrastructure yet to be established.

Another way is to use a catalyst which work by absorbing light particles – photons – into a semiconductor material inserted into water.

The energy of a photon gets absorbed by an electron in the material which then jumps, leaving behind a hole.

The free electron can react with protons (which make up the atomic nucleus along with neutrons) in water to form hydrogen.

Meanwhile, the hole can absorb electrons from water to form protons and oxygen.

The process can also be reversed. Hydrogen and oxygen can be brought together or ‘recombined’ using a fuel cell returning the solar energy taken in by the ‘photocatalysis’ – energy which can be used to power electronics.

Recombination forms only water as a product – meaning the water can also be recycled.