Shetland, we have liftoff: Scottish space firm fires a 6.5ft-long rocket 20,000ft into the air and says it wants to launch satellites into orbit by 2022

The remote Shetland Islands have joined the space race renaissance thanks to the first ever suborbital launch to take off from the archipelago.

A 6.5ft (2m) rocket called Skylark Nano blasted off from Fethaland Peninsula on the mainland of Shetland and reached an altitude of around 20,000 ft (6km).

Rocket firm Skyrora, based in Edinburgh, performed the launch on Saturday.

The fledgling rocket start-up hopes to use a Scottish spaceport to send commercial orbital missions into space by 2022. 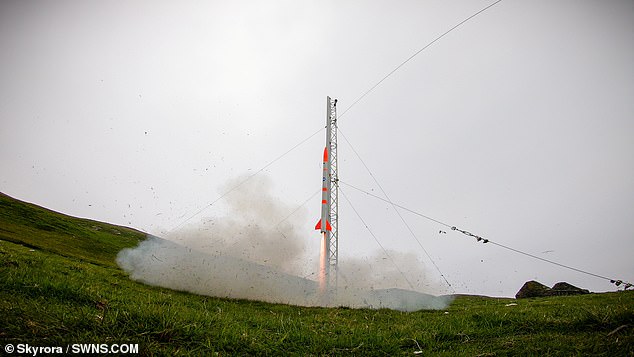 A 6.5ft (2m) rocket called Skylark Nano blasted off from Fethaland Peninsula on the mainland of Shetland and reached an altitude of around 20,000 ft (6km) on Saturday

Skyrora says the launch was purely for educational purposes, to help the firm plan for future missions that may launch from northern Scotland.

The Shetland site is one of three proposed spaceports in Scotland.

The firm has previously had successes, with Nano’s first launch occurring in Ross-shire, Scottish Highlands in summer 2018.

The UK Space Agency in partnership with Aerospace giant Lockheed Martin and Highland and Island’s Enterprise (HIE) put forward a plan to create a launch site for rockets to carry micro-satellites in 2018.

Their plan to build a vertical launch site on the Melness Crofting Estate, on the A’Mhoine peninsula of the Scottish Highlands beat competing bids from other remote Scottish regions for the launch site, which would propel the micro-satellites into low orbit as early as 2021.

However, following rumours of secret deals and strong-arm tactics, many in the remote coastal community of around 150 crofters and farmers opposed the plan.

Another milestone was successfully reached last month when the company performed a full static fire test on their Skylark-L launch vehicle.

‘We’re ecstatic and truly proud. This is a great success for Skylark Nano, and the Skyrora team in general.

‘Launching from Shetland is very important for us because it’s a potential option for our Skyrora XL orbital commercial launch vehicle.’

Skyrora XL is a three-stage rocket which the British rocket scientists hope will carry satellites into sun-synchronous orbit up to 620 miles above Earth.

Scotland is currently deciding where to locate its spaceport, and Shetland is one of the potential landing spots.

‘To understand the local launch conditions, learning more about the wind profiles in Shetland is critical,’ Mr Hague says.

‘Skylark Nano’s third successive launch is testament to the engineers who have worked tirelessly to bring to life a reusable rocket that can provide valuable intelligence for the future of the UK space programme.’

Volodymyr Levykin, Skyrora CEO, adds: ‘With this successful launch from Shetland we are further closing the gap to making the UK a rocket launching nation again.’