Britain’s loudest bird the ‘booming bittern’ is making a recovery after almost disappearing from the UK twice, RSPB claims

Britain’s loudest bird, the ‘booming’ bittern, is making a solid recovery after almost disappearing from the UK twice, RSPB reveals.

The Eurasian bittern (Botaurus stellaris) has had a record-breaking year in the UK, with 228 booming males counted in 2021, up from 209 in 2019, the charity says.

Bitterns can be found around wetlands with large reedbeds, especially RSPB reserves at Minsmere, Suffolk, and Leighton Moss, Lancashire.

The secretive bird is counted based on the presence of the male’s distinctive booming call, which can travel over three miles.

A member of the heron family, the bittern was declared extinct in the UK in the 1870s due to over-hunting for food and draining of their wetland homes for agriculture.

The bird was prized as a medieval banquet dish in the past and its numbers were further hit by hunting and the loss of its reedbed habitat as wetlands were drained. 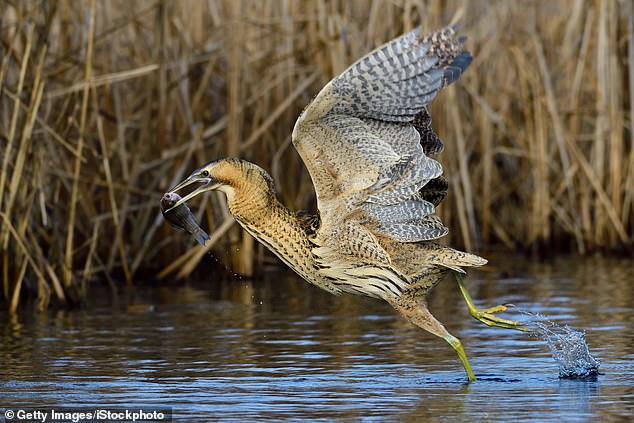 Eurasian bittern (Botaurus stellaris), also known as the great bittern, a wading bird with fish in its beak, taking off. Glimpses of the bird are rare – the public are more likely to know it’s around from the distinctive booming call of the male 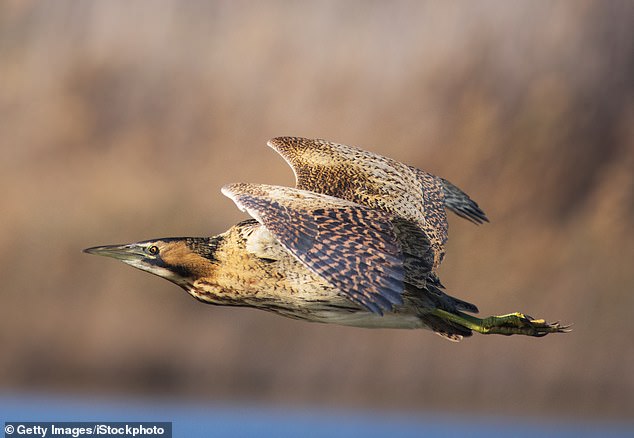 The Eurasian bittern (Botaurus stellaris) has had a record-breaking year with 228 booming males counted in 2021, up from 209 in 2019, the RSPB says

The bittern is a thickset heron with all-over bright, pale, buffy-brown plumage covered with dark streaks and bars.

A secretive bird, very difficult to see, as it moves silently through reeds at water’s edge, looking for fish.

The males make a remarkable far-carrying, booming sound in spring.

They eat fish, amphibians and insects.

Bitterns can be found around wetlands with large reedbeds, especially RSPB reserves at Minsmere, Suffolk, and Leighton Moss, Lancashire.

Bitterns returned to Britain in the early 20th century, and restoration of wetlands has allowed their numbers to more than double in a decade. RSPB says more than half of the birds in the UK are on its reserves.

‘The bittern’s recovery shows how quickly nature can bounce back when given the chance – and we all benefit from creating healthy spaces for wildlife,’ said Simon Wotton, RSPB’s senior conservation scientist.

‘People get such joy from hearing the bittern’s mighty foghorn-like song, and their wetland home also protects people from flooding and helps to soak up carbon.

‘It’s a win-win for wildlife and people, and we hope that one day the boom of the bittern will be heard around the UK once more.’

Bitterns went extinct in the UK in the 1870s, although the bird managed to recolonise the Norfolk Broads in 1911.

National numbers rose until the 1950s they then crashed once more to a low point in 1997, when the entire national population dwindled to just 11.

They’ve since made something of a recovery, although the species is still on the amber list, the second-highest conservation priority group of the RSPB’s latest Birds of Conservation Concern report.

According to the RSPB the prospects for UK bitterns are overall good, though the population is at risk from climate change.

As sea levels rise, saltwater could flow into coastal reedbeds, making the habitat unsuitable for bitterns.

Bitterns are well-camouflaged, shy birds that like to hide in reedbeds, so the most reliable way to count them in the breeding season is to listen for the male’s foghorn call.

‘I think it’s one of the loudest birds in the world – you can hear it from up to about two or three miles away.

‘They do have a very distinctive flight – they’re quite a hunched-up bird, they’re quite compact. They’re big, but not as long-legged as herons so you can pick them out.’

The booming call allows the male bittern to see off rival males and attract a mate.

Female bitterns usually mate once a year and have two to three chicks in the breeding season which runs from May to September.

Glimpses of the bird are rare – the public are more likely to know it’s around from the distinctive booming call of the male.

According to the RSPB, the best reserves to see or hear them are Ham Wall in Somerset, Lakenheath Fen in Suffolk, Minsmere in Suffolk, Leighton Moss in Lancashire, St Aidan’s in West Yorkshire and Cors Ddyga, Anglesey, Wales. 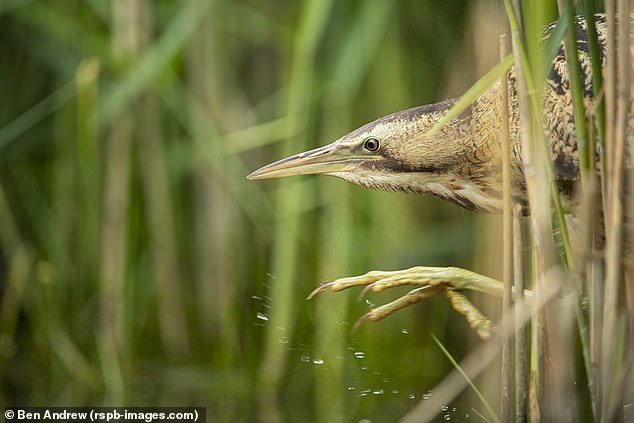 Eurasian bittern adult is photographed moving through the reedbed in Lincolnshire, June 2021 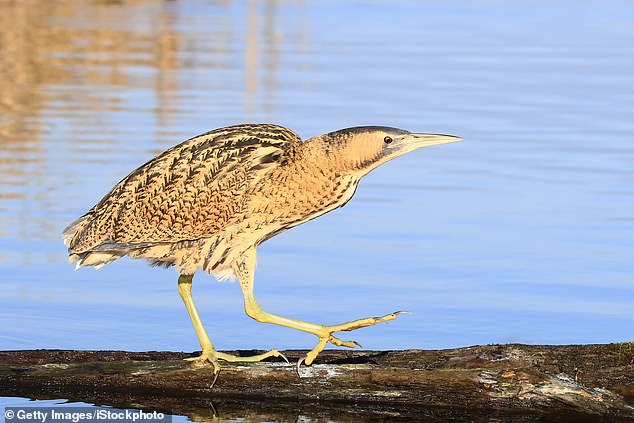 RSPB conservation site staff, volunteers and landowners monitored sites in 2020 and 2021 during the Covid pandemic.

Recording in 2020 was disrupted by the pandemic, so these are the first new numbers since 2019.

A key part of bringing bittern numbers back up was restoring, recreating, and protecting their wetland habitats.

Many wetlands were drained in the 19th and 20th centuries to make space for agriculture, leaving the bittern fewer and fewer places to breed.

MORE THAN ONE IN FOUR BIRD SPECIES ‘IN SERIOUS TROUBLE’, RSPB SAYS IN BIRDS OF CONSERVATION CONCERN REPORT FOR 2021

More than one in four bird species in the UK is in need of urgent conservation action, a recent report from the RSPB warns.

In December 2021, the charity revealed its latest assessment of the status of all the UK’s 245 regularly-occurring bird species.

In all, 70 species, or 29 per cent of the total, are now of ‘highest conservation concern’ and have been placed on the assessment’s Red List. 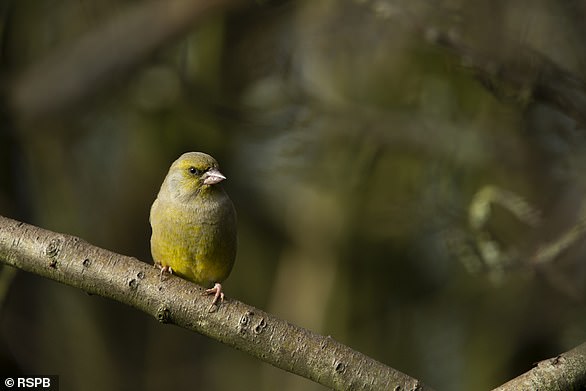 Bird species now in the Red List include the Swift, House Martin and Greenfinch. Pictured is a European Greenfinch (Chloris chloris) adult in a tree in Northamptonshire

Bird species now in the Red List – including the Swift, House Martin and Greenfinch – are of the ‘highest conservation priority’ and in need of ‘urgent action’, mostly due to severe population declines, RSPB says.

Two species have gone straight from the Green List in 2015 to the Red List in 2021 – the Greenfinch and the Ptarmigan (a small, plump game bird).

RSPB says the report ‘adds to a wealth of evidence that many of our bird populations are in trouble’.