Wildlife charity Butterfly Conservation has released data from The Big Butterfly Count, which records the number of butterflies and day-flying moths across the UK.

The results showed that it was good news for certain species including Gatekeeper and Common Blue, which flourished in the warm weather.

However, numbers of the insects are still declining, with an overall change of -2.8 per cent compared to last year. 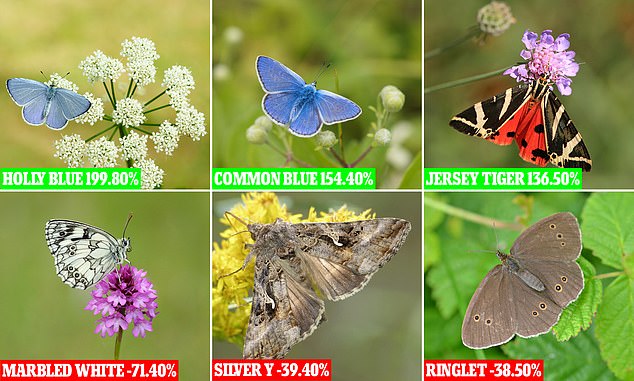 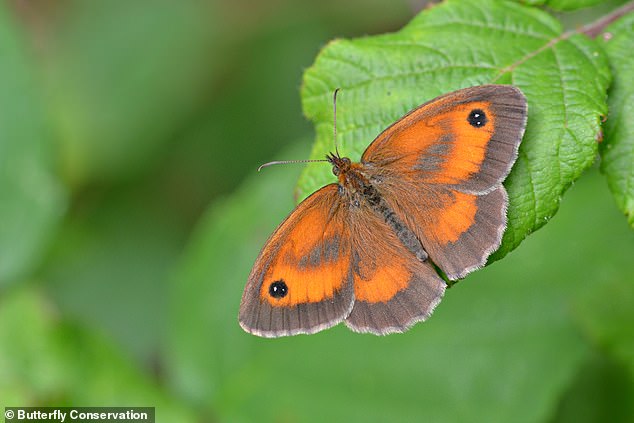 The Gatekeeper was the most spotted butterfly during this year’s count, having been counted 142,618 times

‘We might have expected this summer to have been a much better one for butterflies given the good weather we experienced in many parts of the UK,’ said Dr Richard Fox, Head of Science for Butterfly Conservation.

‘The fact that more butterflies weren’t seen is concerning and it’s clear that much more needs to be done to protect and restore habitats to aid nature recovery.

‘The sun could shine for days on end, but we still won’t see more butterflies unless there is habitat for them to thrive in.’

The Big Butterfly Count relies on volunteers spending 15 minutes outside each summer, counting the number and type of butterflies they see.

This year, almost 100,000 Butterfly Counts were carried out, with participants spending a combined total of 2.5 years counting butterflies in their gardens, local parks and in the countryside.

Dr Zoe Randle, Senior Surveys Officer at Butterfly Conservation, said: ‘The vast majority of Big Butterfly Counts are done in gardens, which makes this data especially valuable because this type of habitat is under-represented in many of our other schemes.’

The results revealed how 2022 was a great year for several species.

The Gatekeeper was the most spotted butterfly during this year’s count, having been counted 142,618 times.

This is welcome news, according to Butterfly Conservation, as the species experienced its second worst Big Butterfly Count result last year.

Blues also thrived this year, with both the Common Blue and Holly Blue faring well, increasing by 154.4 per cent and 199.8 per cent respectively when compared to 2021.

Meanwhile, the Comma, a popular species often found in gardens, saw an increase of 95 per cent compared with last year.

‘We can create habitat for butterflies such as the Holly Blue and Comma in our gardens, by cultivating Holly and flowering Ivy for the former and growing Hop, elms and nettles for the latter,’ advised Dr Randle.

‘Gardens that are wildlife friendly can provide vital habitat for these insects, allowing them space to feed, breed and shelter.’

Unfortunately, overall the trend for butterflies across the UK remains a declining one.

The results show an average of just under nine butterflies seen per count – an all-time low in the 13 years since the project began.

Butterfly Conservation hopes the findings will help to shed light on how butterflies are coping with climate change, changing weather, and habitat loss.

THE AMAZING MIGRATION OF THE MONARCH BUTTERFLY

The 3,000-mile mass migration of monarch butterflies in North America is one of the insect world’s fantastic feats.

Millions embarking on the arduous journey from as far north as Canada down into Mexico and the California coast each autumn.

The number of migrating monarchs has plummeted in recent years.

Researchers said while an estimated one billion monarch butterflies migrated to Mexico in 1996, that number stood atabout 35 million this past winter.

Threats to them include habitat loss due to human activities, pesticides that kill milkweed and climate change, experts say.

Monarch butterflies living east of the Rocky Mountains spend their winters in Mexico to escape the cold weather while those west of the Rockies spend winters on the California coast before returning home in the spring.

Scientists say their orange color tells potential predators they taste awful and are toxic to eat thanks to chemicals from the milkweed plants that nourish them in their larval state.