How we stop ourselves from jumping the gun: Scientists discover ‘impulsivity switch in the brain’ that suppresses the urge to act until the time is right

Experts have discovered an ‘impulsivity switch’ in the brain that lets mammals suppress the urge to ‘jump the gun’ and only act when the time is right.

Manipulating neurons, also known as nerve cells, in these areas can override our ability to control the urge to jump the gun and therefore trigger impulsive behaviour.

Keeping the ‘impulsivity switch’ on is how athletes stop themselves from running before the starting gun has fired, how dogs obey a command to resist a treat, or how lions in the wild can wait for the perfect moment to pounce on its prey. 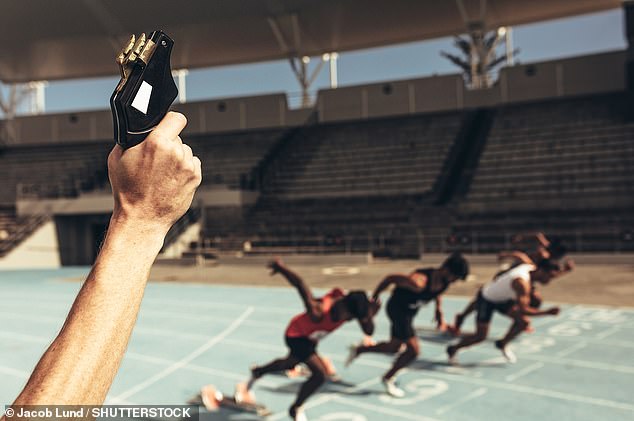 ‘We discovered a brain area responsible for driving action and another for suppressing that drive,’ said study author Joe Paton, director of the Champalimaud Neuroscience Programme in Lisbon, Portugal.

Both are located in the striatum, a cluster of neurons in the brain’s ‘basal ganglia’ region.

– ‘Sensorimotor, dorso-lateral striatum‘ is responsible for suppressing that drive

Whether we supress or drive action dictates whether we ‘jump the gun’.

‘We could also trigger impulsive behaviour by manipulating neurons in these areas.’

The team set out to tackle a puzzle that arose in part from Parkinson’s and Huntington’s – two movement disorders with broadly opposite symptoms.

Both conditions stem from dysfunction of the same brain region, the basal ganglia, which contains two major circuits – direct and indirect pathways.

It’s already been thought the direct pathway promotes movement and the indirect pathway suppresses movement, but the precise manner by which this is carried out was largely unknown.

While previous studies investigated the basal ganglia during movement, Paton’s team focused on the active suppression of movement – specifically in animals that have been forced to or learnt to suppress the urge to move.

About a tenth the diameter of a human hair, it is one of the basic elements of the nervous system. They transport stimuli so a human can react to his or her environment.

The team therefore designed a task where mice had to determine whether an interval separating two audio tones was longer or shorter than 1.5 seconds.

If it was shorter, a reward would be provided on the left side of the box, and if it was longer, it would be available on the right.

‘The key was that the mouse had to stay perfectly still in the period between the two tones,’ said study author Bruno Cruz.

‘So even if the animal was certain the 1.5-second mark had passed, it needed to suppress the urge to move until after the second tone sounded, and only then go for the reward.’

As in past studies, activity levels in the two pathways were shown to be similar when the mouse was moving, but here they were ‘strikingly different’.

The activity of the indirect pathway was overall higher and it continuously increased while the mouse waited for the second tone.

This increase in activity in the indirect pathway suggests an ‘internal struggle’ where it becomes more and more difficult to resist the urge to move.

The team then decided to inhibit the indirect pathway, using light directed at specific times to shut down neural activity. 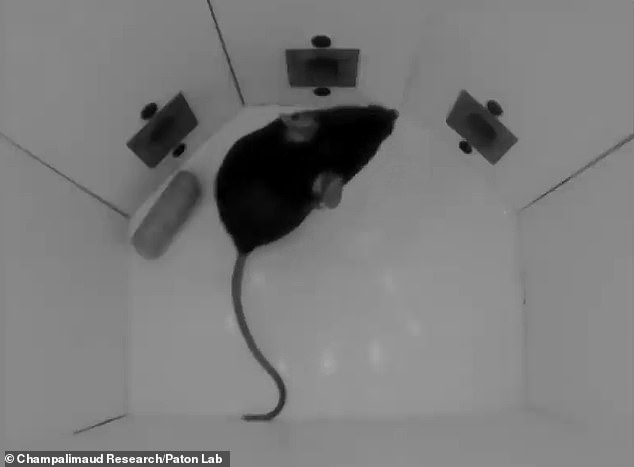 The team designed a task where mice had to determine whether an interval separating two audio tones was longer or shorter than 1.5 seconds. If it was shorter, a reward would be provided on the left side of the box, and if it was longer, it would be available on the right

This manipulation caused the mice to behave impulsively more often, significantly increasing the number of trials where they darted to the reward port prematurely.

‘We knew the mice were experiencing a strong drive to act because removing suppression promoted impulsive-like action,’ Paton said.

The team also found inhibiting neurons of the direct pathway in a brain region called the dorsomedial striatum resulted in altering the mouse’s behaviour.

The dorsomedial striatum is already known to be important in goal-driven behaviours, maze learning and cognitive flexibility.

For example, the indirect pathway is excessively active for people with Parkinson’s, resulting in a ‘pathological engagement of action suppressing mechanisms’.

Manipulating activity in these pathways can clearly help alleviate the disease symptoms.

The new study, which has been published today in the journal Nature, even has ‘broad implications’ in the fields of machine learning and AI, according to Paton.

‘Observations from neuroscience are at the core of many machine learning and AI techniques,’ he said.

‘The idea that decision-making can happen through the interaction of numerous parallel circuits within the same system might prove useful for designing new types of intelligent systems.’

WHAT IS PARKINSON’S DISEASE AND WHAT ARE THE SYMPTOMS?

Broadcaster Jeremy Paxman has revealed he has been diagnosed with Parkinson’s disease, but what are the causes and symptoms, and how is it treated?

What is Parkinson’s disease?

Parkinson’s disease is a neurodegenerative disorder that affects parts of the brain.

The NHS says there are three major symptoms, including tremors or shaking, slowness of movement and muscle stiffness.

Other symptoms include problems with balance, loss of smell, nerve pain, excessive sweating and dizziness.

Some people can also experience lack of sleep, excessive production of saliva and problems swallowing, causing malnutrition and dehydration.

What are the early signs?

Symptoms start gradually, sometimes beginning with a barely noticeable tremor in just one part of the body.

In the early stages, people may show little or no expression, and their arms may not swing when they walk.

Speech can also become soft or slurred, with the condition worsening over time.

What are the causes?

Scientists believe a combination of genetic and environmental factors are the cause of Parkinson’s disease.

It occurs after a person experiences loss of nerve cells in a part of their brain.

However, it is not known why the loss of nerve cells associated with the condition takes place.

Scientists say genetics cause about 10 to 15% of Parkinson’s, and can therefore run in families.

Other factors attributed to causing the condition include environmental problems such as pollution, though such links are inconclusive, the NHS says.

How is it diagnosed?

No tests can conclusively show if a person has the disease, but doctors can make a diagnosis based on symptoms, medical history and a physical examination.

A specialist will ask the person to write or draw, walk or speak to check for any common signs of the condition.

They may even check for difficulty making facial expressions and slowness of limb movement.

How many people are affected?

Around 145,000 people live with Parkinson’s disease in the UK.

What happens if someone is diagnosed?

According to Parkinson’s UK, it is a legal requirement to contact the DVLA, as a diagnosed person will need to have a medical or driving assessment.

The organisation also advises people to contact any insurance providers and find out about financial support available.

People are also encouraged to partake in more exercise.

Can it be treated?

Although there is no cure, a number of treatments are available to help reduce the symptoms.

The three main remedies include medication, exercise and therapy, which can help people in different ways.

What medication is available and what are the side effects?

Medication can be helpful in improving the main symptoms of Parkinson’s disease, such as shaking and movement problems.

There are three main types which are commonly used, levodopa, dopamine agonist or a MAO-B inhibitor.

Each can affect people in different ways.

The drugs do have some side effects, including impulsive and compulsive behaviour, hallucinations, sleep issues and blood pressure changes.

What therapy is available?

There are several therapies available to those with Parkinson’s through the NHS.

Among them are physiotherapy to reduce muscle stiffness, occupational therapy to help with completing day-to-day tasks and speech and language coaching.

Does this change the way you live?

Most people’s life expectancy will not change a great deal, though more advanced symptoms can lead to increased disability and poor health.

It can also cause some cognitive issues and changes to mood and mental health.

Those with Parkinson’s are encouraged to exercise more often, with scientists saying 2.5 hours of exercise a week is enough to slow the progression of symptoms.

Parkinson’s affects one in 500 people and causes muscle stiffness, slowness of movement, tremors, sleep disturbance, chronic fatigue, an impaired quality of life and can lead to severe disability.

It is a progressive neurological condition that destroys cells in the part of the brain that controls movement.

Sufferers are known to have diminished supplies of dopamine because nerve cells that make it have died.

There is currently no cure and no way of stopping the progression of the disease, but hundreds of scientific trials are underway to try and change that.

The disease claimed the life of boxing legend Muhammad Ali in 2016.