In a second bit of footage released by the Boston-based firm Spot is seen meeting and showing the boy band its competent dance moves.

Boston Dynamics said the videos are ‘in celebration’ of its full acquisition by South Korean motor company Hyundai, which was announced last week. 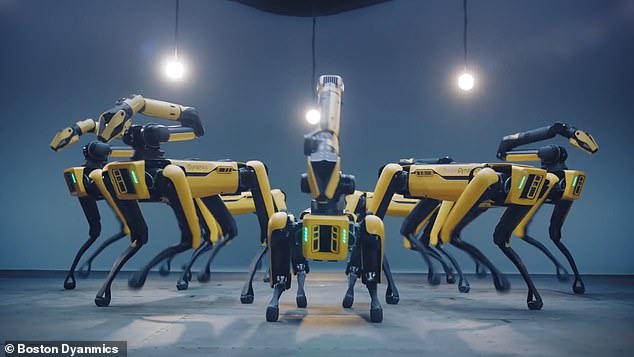 Funky: Seven units of the robotic dog Spot are seen performing a variety of impressive moves to K-pop band BTS’s music in a new video released by Boston Dynamics 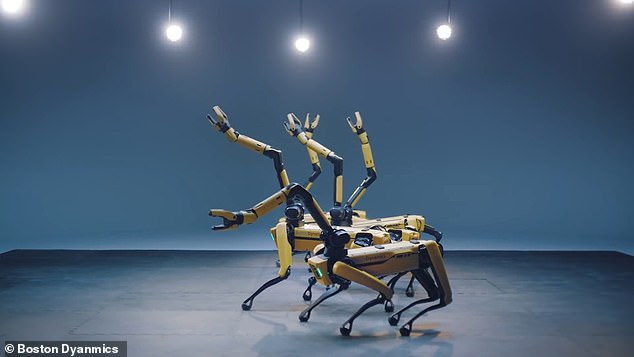 In time with the music, the seven Spot’s arms shoot out into a fluid series of elaborate patterns

Shooting the video was an unprecedented technical challenge, according to Eric Whitman, a Boston Dynamics roboticist.

‘There were a lot of challenges around getting the vision of our choreographer, who’s used to dealing with human dancers, into our software,’ said Whitman in a Boston Dynamics blog post.

‘Everything had to be worked out in advance and scripted precisely. Robots have the advantage over humans in that they’re very repeatable – once you get it right, it stays right.

‘But they have the disadvantage that you have to tell them every little detail. They don’t improvise at all.’ 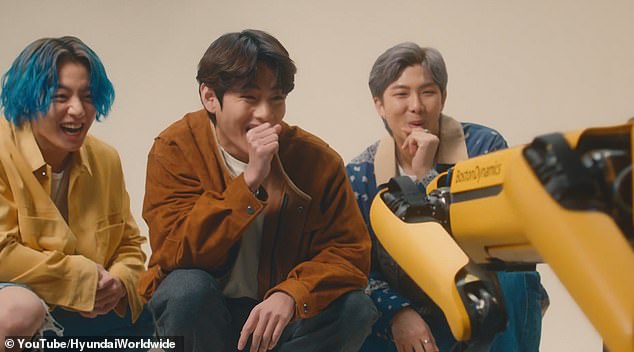 In time with the music, the seven Spot’s arms shoot out into a fluid series of patterns, giving the appearance of a single, many-armed robot ‘peacocking for the camera’, the firm says.

Finally, the seven Spots separate, synchronising their steps and appearing to play off of one another’s dance moves.

In the second video where Spot meets the band, another Boston Dynamics robot, called Atlas, also makes an appearance.

Atlas is a scary six-foot-tall bipedal humanoid robot, but arguably dances better than the members of BTS. 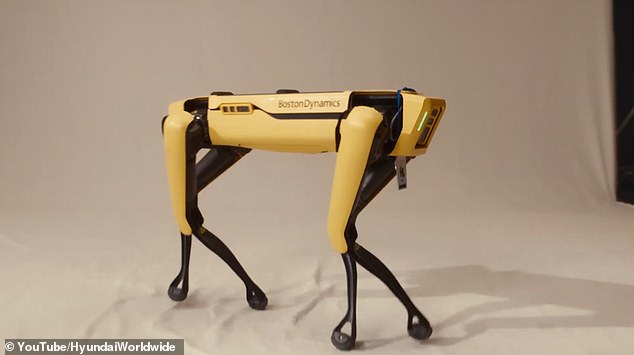 Spot is able undertake hazardous tasks in a variety of inhospitable environments such as nuclear plants, offshore oil fields and construction sites 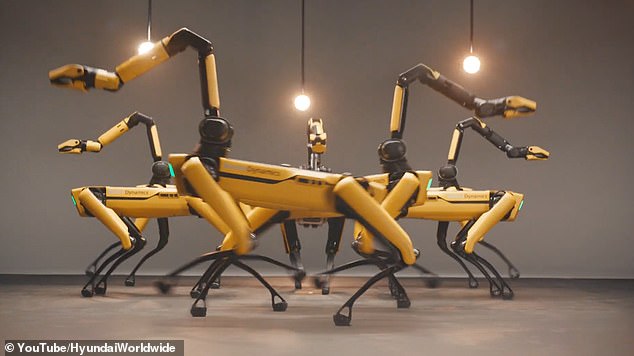 The nimble, four-legged robotic dog was under development by Boston Dynamics for years before it was finally made released in June last year 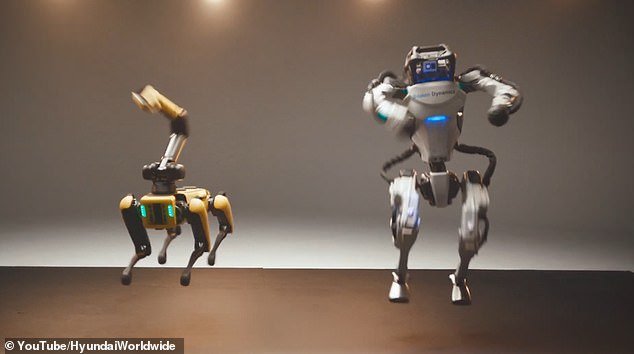 And last year Spot joined Atlas and Handle, another Boston Dynamics robot, in a dance performance to the 1962 Motown classic ‘Do You Love Me’ by The Contours.

Getting Spot to dance actually serves a purpose, according to the firm – it gives its mechanical design and algorithms in the software a bit of a workout.

But the videos are also a bit of light relief from the notoriously secretive Boston firm, whose robot dog is commercially available and costs a whopping $75,000 (about £60,000).

It can be used for a range of heavy duty applications, including inspecting rocket launch test sites, as demonstrated by SpaceX.

The nimble, four-legged robotic dog was announced by Boston Dynamics back in 2016 but was under development by the firm for years before being released commercially on June 17, 2020. 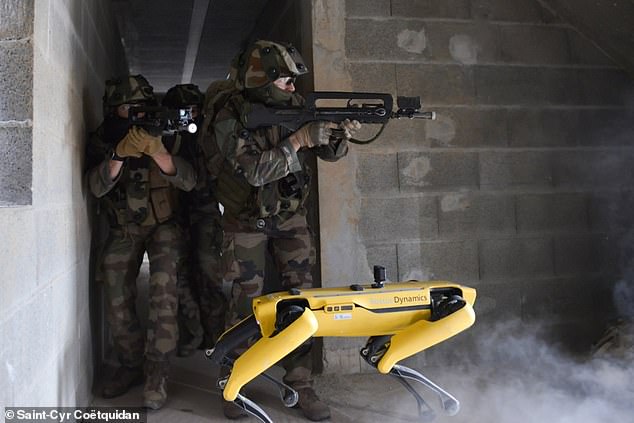 ‘We also have a project that I’m sure many of you are going to be very interested in, and that’s cleaning up your house,’ he said in 2020.

Boston Dynamics’ CEO Rob Playter said that the company had sold around 400 Spot units as of February 2021. 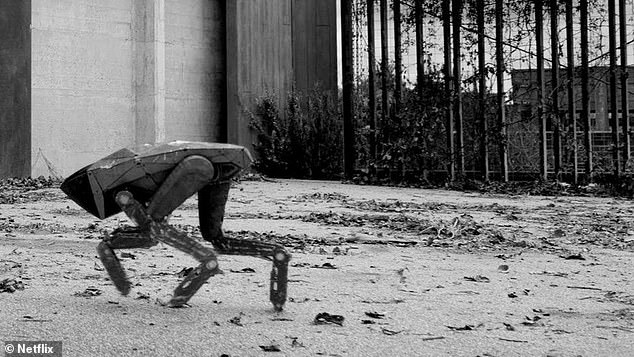 In the 2017 episode, called ‘Metalhead’, people in the near future flee from an army of robotic dogs that ruthlessly hunt down humans.

But not to worry – Boston Dynamics reassured that it will not support uses of Spot that ‘harm or intimidate’ people which includes banning the attachment of weapons.

The firm hasn’t ruled out selling Spot to security firms, for example, or further law enforcement trials, however.

Back in February, Spot unveiled a new product line for Spot – a self-charging version of the dog, called Enterprise Spot; Spot Arm, a fifth limb that can grasp, carry and drag different objects; and a web-based remote operations software, called Scout.

Spot Enterprise is a new version of Spot that comes equipped with self-charging capabilities and a dock.

This allows it to perform longer inspection tasks and data collection missions with little to no human interaction.

Spot Arm is the dog’s fifth limb, which has allowed it to open doors in past promotional videos but was not included in the final product released in 2020.

The add-on arm can manually or semi-autonomously grasp, lift, carry, place, and drag a wide variety of objects.

Boston Dynamics says: ‘It is also capable of manipulating objects with constrained movement and can open and close valves, pull levers and turn handles and knobs in coordination with its body to open standard push and pull doors.’

Scout is Boston Dynamics’ web-based software that enables operators to control their fleet of Spots from a virtual control room.

Operators can use Scout to take Spot anywhere a person could go on-site, allowing them to inspect critical equipment or hazardous areas from afar.

The software is designed with a simple user interface to run pre-programmed autonomous missions or manually control the robot.

This lets it perform various tasks such as walking or posing the robot to capture images and thermal data of obscured gauges or pipes, using Spot’s CAM+IR thermal imaging.