Blue Origin’s New Shepard has its FIRST failed launch: Capsule activates escape system that releases 70,000 pounds of thrust to quickly separate from the rocket that lost its engine one-minute after liftoff

Blue Origin’s New Shepard rocket experienced its first failed launch Monday due to an ‘anomaly’ just about one-minute after liftoff that saw the capsule activate its escape system to pull away from the booster when its engine went out.

The capsule quickly ignited its escape motor that generated at least 70,000 pounds of thrust in just a few seconds and then burned out to allow the craft to deploy its parachutes and coast back to Earth.

This is the first time the escape system had been used in a real situation – previous scenarios were to test the technology.

The capsule was uncrewed, it was only carrying scientific research equipment, but had humans been inside they would ‘have felt a serious jolt, but would ‘have been safe,’ Eric Berger with Ars Technica reports.

Blue Origin has yet to reveal what caused Monday’s issue.

The engine went out on the boost one-minute and five seconds after Blue Origin’s New Shepard rocket took off. Liftoff was around 10:26am ET from the company’s West Texas site

‘It appears we have experienced an anomaly on today’s flight,’ said Erika Wagner, Blue Origin’s payload sales director and host of the company’s launch webcast Monday.

‘This was unplanned and we don’t have any details yet, but our crew capsule was able to escape successfully.’

Blue Origin, which is owned by Jeff Bezos, launched New Shepard for its 23rd flight at 10:26am ET from its West Texas site and inside the capsule was 36 payloads, half of which are funded by NASA and the rest are from students in Kindergarten through 12th grade, universities and STEM-focused organizations.

‘This is double the number of education-focused payloads from previous payload flight manifests,’ Blue Origin shared in a statement.

‘In many cases, these payloads expose students as young as elementary school to STEM skills like coding, environmental testing and CAD [computer-aided design] design often not taught until college.’ 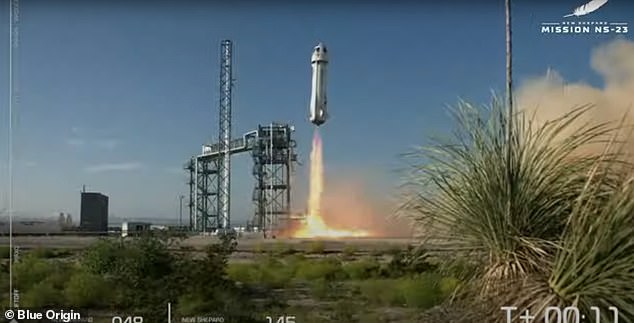 This was Blue Origin’s third attempt to launch the rocket. The two other missions were scrubbed due to poor weather 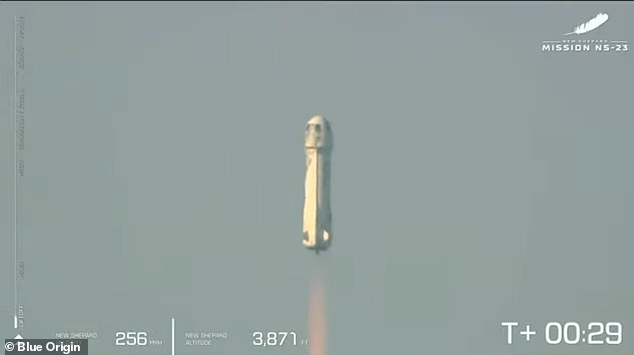 This was also set to be the rocket’s 23rd flight. It was carrying 36 payloads of scientific research experiments

And all seemed well until one-minute and five seconds after New Shepard left the launch pad.

The uncrewed capsule ignited is escape motor when it reached just shy of 30,000 feet above the surface and the system performed as hoped, as it quickly separated from the failed booster and then fizzled out to let the capsule deploy its three parachutes so it could make a soft landing back on Earth.

‘You can see how our backup safety systems kicked in today to keep our payloads safe during an off-nominal situation,’ Wagner said after the capsule landed.

‘Safety is our highest value at Blue Origin. It’s why we built so much redundancy into the system.’

The first testing of the escape system was conducted in 2016 and Monday was the first time it has been used since. 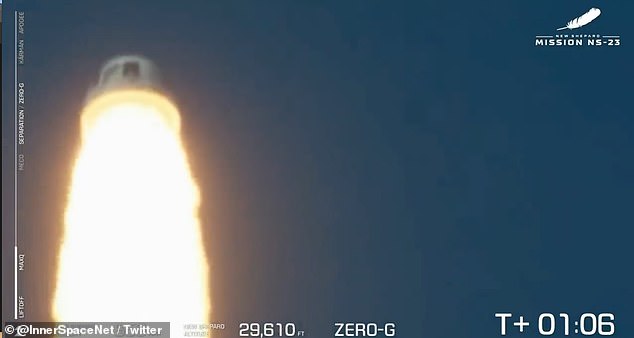 However, the  capsule activated its escape system when it detected an issue with the booster. This is the first time the system has been used in a real world scenario 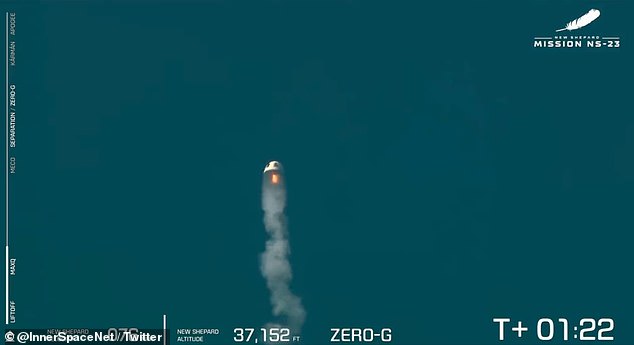 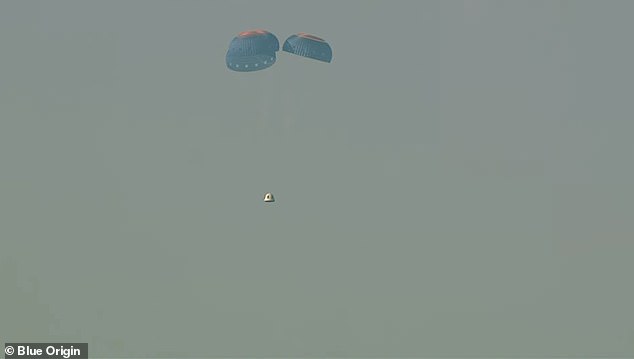 This allowed the capsule to deploy its three parachutes and coast safely back to Earth. Blue Origin has yet to reveal what caused Monday’s failure

Officials have not yet said what caused the issue during launch, which may take some time to investigate. ‘More information to come as it is available,’ Blue Origin wrote in a tweet.

This was also the third attempt for the 23rd flight – both the August 31 and September 1 launches were scrubbed due to poor weather.

Although the mission was deemed a failure, it is only the second in-flight anomaly Blue Origin has experienced since launching its first rocket in 2015, which saw the first-stage booster make a crash landing.

However, the payload reached suborbital space and the mission was not deemed a complete failure.