Colours of Japan to bloom in the UK: National Trust reveals plans to plant blossoming trees across the country ‘to help signal reflection and hope’ following the Covid-19 pandemic

The National Trust has revealed it will be planting blossoming tree circles across the UK ‘to signal reflection and hope’ post-pandemic.

The charity will plant the trees in and around urban areas over the next five years in towns and cities across England, Wales and Northern Ireland.

The Trust wants to create a British equivalent of Japan’s ‘Hanami’ or ‘flower viewing’ – the popular custom of enjoying the transient beauty of flowers.

Planting is currently under way of the first garden at Queen Elizabeth Olympic Park in east London, which is set to be completed this spring.

This blossom garden will include 33 UK-grown trees, including cherry, plum, hawthorn and crab apple, to represent the 33 London boroughs.

The charity hopes it will be a place to remember all those who have lost their lives, honour key workers and ‘reflect on the city’s shared experience of the pandemic’. 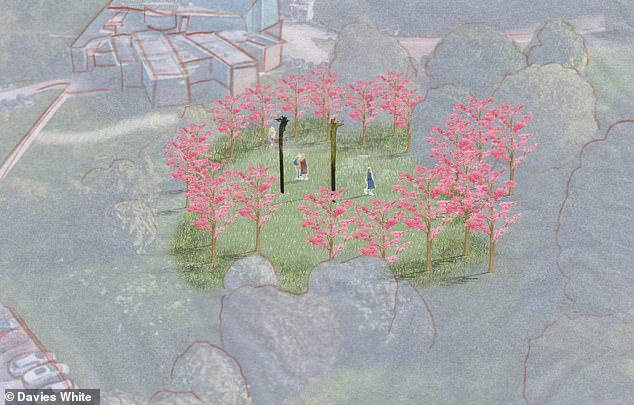 The National Trust and partners are looking to spring blossom to help signal reflection and hope with their plans to plant blossoming tree circles in cities across England, Wales and Northern Ireland over the next five years. Pictured, blossom design for London

The site for the first blossom circle will be Queen Elizabeth Olympic Park in Newham, London – the same borough as the temporary NHS Nightingale hospital.

The London garden is being created in partnership with the Mayor of London with support from Bloomberg, working with Rosetta Arts and landscape architects The Edible Bus Stop and Davies White Landscape Architects.

Residents who are local to Queen Elizabeth Olympic Park in Newham were invited to help shape the tone, feel and use of their circle.

The National Trust said it will be a commemorative space to reflect on the impact of Covid-19 on the capital, remember all those who have lost their lives and honour key workers.

The London blossom garden, created in partnership with the Mayor of London, is in same borough as NHS Nightingale Hospital – one of seven critical care temporary hospitals established by NHS England specifically to treat Covid patients.

‘This new public garden will create a lasting, living memorial to commemorate all those who have lost their lives in the pandemic,’ said Mayor of London Sadiq Khan.

‘It will be a tribute to the amazing ongoing work of our key workers and create a space for Londoners to contemplate and reflect on all this global pandemic has meant to our city and world.

‘The blossoming trees will be a permanent reminder of this incredibly challenging time in all our lives and a symbol of how Londoners have stood together to help one another.’

There are more spaces in the pipeline for Newcastle, Nottingham and Plymouth, for which concepts have been drawn up, and other locations expected to be announced soon.

Local residents will be able to use the new blossom spaces as quiet places for reflection, peace and enjoyment.

The conservation charity will work with partners and local communities on the design, tree planting and plans for how the spaces will be used now and in the future, as well as ensuring the sites are accessible and meet the locals’ needs.

As well as a place for reflection, the spaces will be also suited for various events and social gatherings, workshops, festivals and exhibitions once lockdown restrictions are eased. 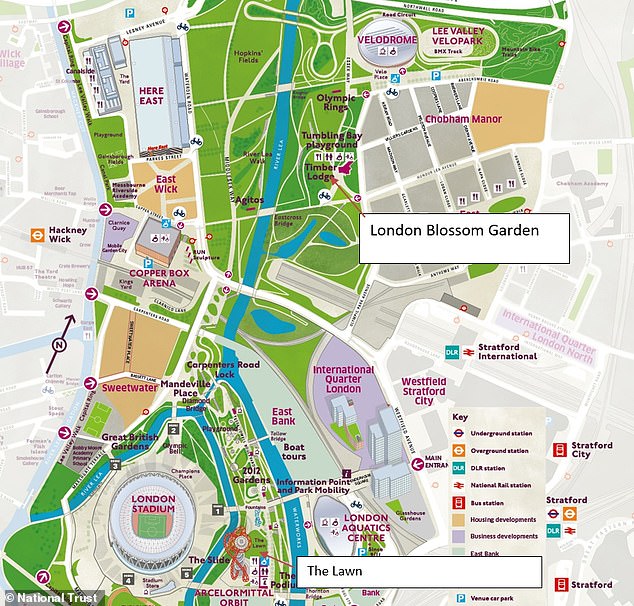 Planting is currently under way of the first garden at Queen Elizabeth Olympic Park in east London, which is to be completed this spring. Its location is marked above 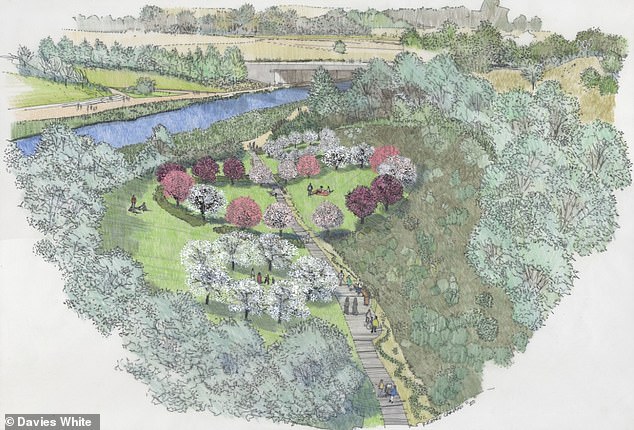 Blossom design for London. The final agreed design for the London garden includes 33 UK grown trees including cherry, plum, hawthorn and crab apple to represent the 33 London boroughs. These will be arranged in three circles. Planting is currently underway with the new garden due to be completed this spring

‘It’s a fantastic example of how heritage organisations help make our neighbourhoods more beautiful and improve our physical and mental well-being, and I look forward to seeing this project bloom in our communities,’ said Culture Secretary Oliver Dowden.

The annually blossoming tree circles, which are being funded in part from players of People’s Postcode Lottery, will be planted both on and off National Trust land and on already existing green spaces. 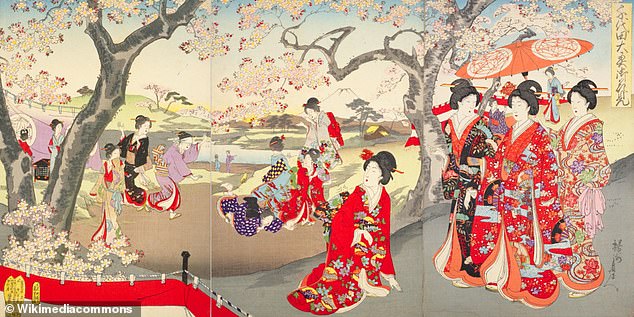 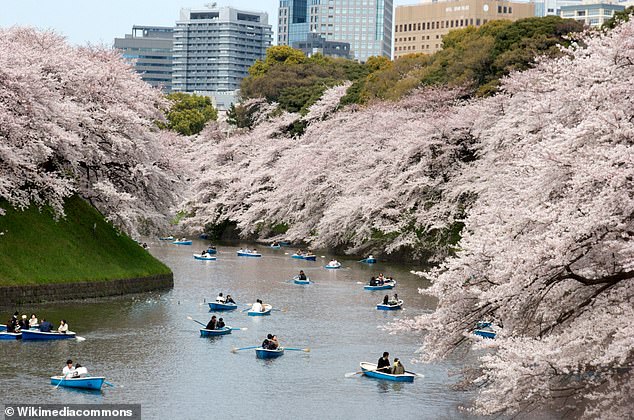 The National Trust project aims to create a British equivalent of Japan’s ‘Hanami’ – the popular custom of enjoying the transient beauty of flowers. Pictured, blossom in Chidorigafuchi, Tokyo

The project will help meet the National Trust’s ambition to plant 20 million trees by 2030 to help tackle climate change and create new homes for nature.

‘This project is just one element of our ambitions to plant more trees and to address Britain’s need for green space and nature where people live,’ said Hilary McGrady, director general at the National Trust.

‘If, by creating these blossom spaces, we can create areas for people of all ages to take notice and connect with the natural world – while also creating havens for urban nature – that has to be a good thing.’

Brits recognised the importance of access to nature during lockdown and found green spaces beneficial for their physical and mental health, according to previous National Trust research.

In June last year, the results of a YouGov poll for the Trust showed 68 per cent of adults agreed that spending time noticing the nature around them had made them feel happy during lockdown. 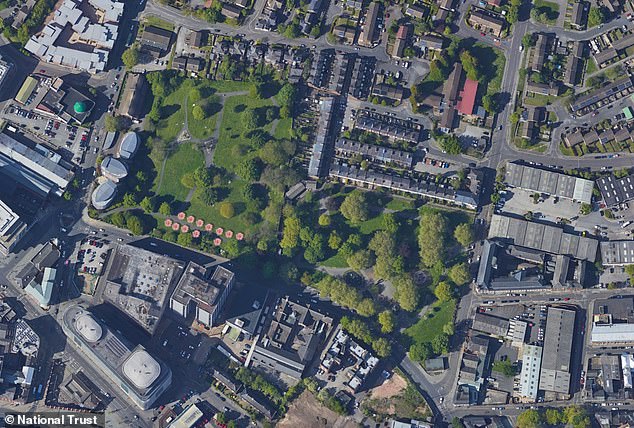 Nottingham St Mary’s Rest Garden concept plan. The charity is working with its partners to ensure sites are accessible and meet the needs of local communities

Over a third (38 per cent) of adults also said that time in nature was the moment they looked forward to most each day during the lockdown.

‘Although we suspected that nature was providing the nation some level of comfort during these distressing and unprecedented times, we wanted to get a better understanding of how it was helping people through this period,’ said Andy Beer, director of the Midlands at the National Trust, at the time.

‘The results tell us that people have found spending time in nature or seeing nature has had a positive effect on their mood, and hopefully therefore, helped their mental wellbeing.’

Last summer, a report by Vivid Economics highlighted inequalities in access to green space across Britain.

The report described 295 deprived urban neighbourhoods as ‘grey deserts’ with no trees or accessible green space. 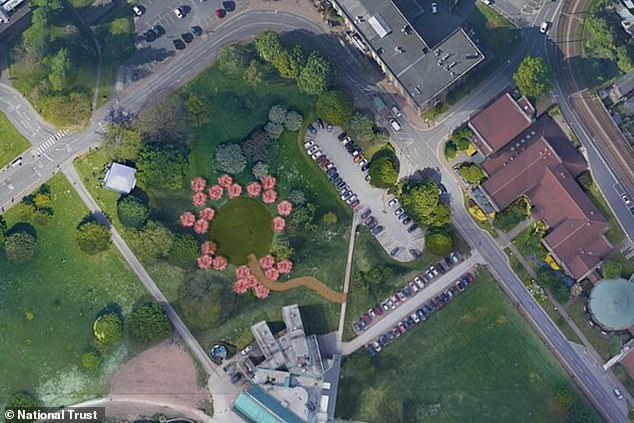 Pictured, a concept plan for a blossom garden for Nottingham Highfields Park, which is on the southern outskirts of the city

In the poorest 20 per cent of households, 46 per cent don’t have a car, so urban parks and green spaces are their only opportunity to have contact with nature, rural beauty spots are beyond reach.

There was huge surge in people’s use of parks and green spaces during the coronavirus pandemic – up 25 per cent by May 2020 compared to May 2018, the Trust revealed. 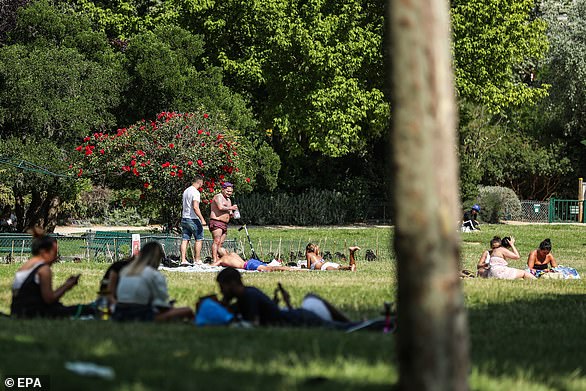 Boris Johnson is being urged to plough £5.5 billion into creating a ‘green economy’ of parks and open spaces to turbo-charge Britain’s recovery from the coronavirus pandemic.

Bold plans to transform thousands of neighbourhoods and spend millions of pounds to upgrade neglected parks have been drawn up by the National Trust, charities and council leaders who say it would create a £200 billion bonanza in physical and health benefits for 20 million people.

In June, the PM announced plans to ‘build, build, build’ Britain out of the economic slump sparked by the Covid-19 crisis and ‘level up’ the poorest areas of the country.

But research published by the National Trust and partners argues ‘greening’ the UK’s urban communities would create an army of new jobs.

It calculates that the transformation of 9,200 neighbourhoods and ‘under-performing’ parks would give work to 40,000 people.

Experts from the consultancy firm Vivid Economics and planners Barton Willmore said £2.5 billion should be spent on giving ‘green streets’ and parks to 600 of Britain’s most-deprived neighbourhoods.

Another proposal is to turn a ring road in Reading town centre into an urban park.

Under the plan, new green boulevards and public squares could be established to lure people back to struggling high streets and city centres.

One idea is for a green, traffic-free corridor stretching from Manchester city centre to the countryside.

There are also suggestions for a new National Park for the West Midlands, which would create hundreds of miles of green space, conservation areas and cycle routes.

Andy Street, the mayor of the West Midlands, said: ‘The coronavirus pandemic has shown us just how important these spaces are, not just for physical well-being but also for people’s mental health.

‘Because of this, there is now real potential to achieve bold, green change in the next few years and this must be at the forefront of the Government’s mind as it begins to draw up recovery plans.’

‘We also plan to transform and connect the city’s network of green spaces, working with business and community partners, but we need investment to unlock this potential and kick-start our green recovery,’ Rees said.

Campaigners have been encouraged by the popularity of parks during the pandemic, with some seeing a 300 per cent rise in visits.

Hilary McGrady, director-general of the National Trust, said: ‘We are calling for a major collaborative effort – for national Government, local councils, charities, businesses, communities and funders across our cities and towns to work together in new ways to bring nature and beautiful green spaces into everyone’s lives.

‘The Prime Minister could lead a transformation that enables all urban dwellers to live with beauty; a gift of renewal and hope comparable to the post-war creation of the nation’s great rural national parks and its urban green belts.’