Not so bird-brained after all! Avians quickly learn to avoid plants that host toxic insects, study finds

It’s already well known that animals such as birds learn to avoid eating poisonous insects that could potentially kill them.

Now, researchers at the University of Bristol have found that birds can even learn to avoid the plants that host these toxic insects.

In the wild, the academics exposed several wild bird species to artificial cinnabar caterpillars, which are known for their yellow and black stripes.

They found the birds were less likely to go for the fake caterpillars if they were perched on ragwort – a poisonous plant – than a non-poisonous plant. 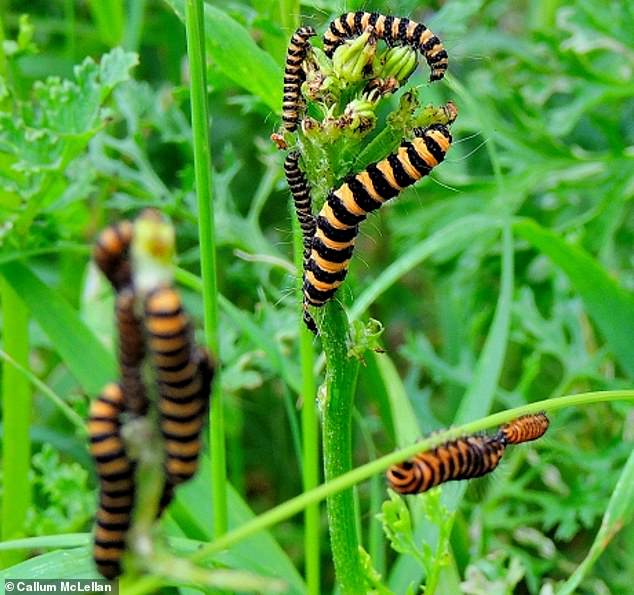 Cinnabar larvae feeding on ragwort. The bold yellow and black stripes of the moth species (Tyria jacobaeae) make it easy to identify in the wild

Cinnabar moth caterpillars can be found in their hundreds munching away on yellow-flowered ragwort.

As well as being the cinnabar caterpillar’s main food plant, ragwort supports more than 40 other insect species and is an important source of nectar.

It is also toxic and well known for its potential to poison horses and other livestock if eaten, particularly via contaminated hay.

The toxins within the growing plant make it so bitter and unpalatable that it is usually avoided – but the cinnabar caterpillars feast upon ragwort without ill effect.

They actually benefit from its toxicity by eating enough of it to become toxic themselves, and their colourful stripes are a warning to predators.

Insect species such as caterpillars, ladybirds and moths have conspicuous or colourful markings and bitter-tasting chemical defences to deter predators, including birds.

These predators therefore have to work out whether their potential prey is worth eating or likely to be poisonous, and therefore capable of killing them.

The new study used artificial mock-ups of the cinnabar caterpillar (Tyria jacobaeae), which is striped black and yellow prior to becoming an attractive red-and-black moth.

As a caterpillar, its colourful yellow and black stripes act as something of a warning to predators – ‘I’m poisonous and taste terrible, so don’t try to eat me’.

‘We have shown that birds learn that the ragwort flowers are a cue for danger, so can avoid going anywhere near toxic prey.

Cinnabar caterpillars only live and feed on ragwort, a weed native to Britain and other parts of Europe that has distinctive yellow flowers.

As well as being the cinnabar caterpillar’s main food plant, ragwort supports more than 40 other insect species and is an important source of nectar – but it’s poisonous to birds and other animals.

‘I’m not sure on the mechanism, but through evolution it has gained the ability to harmlessly sequester their host’s pyrrolizidine alkaloids into their tissues to use as their own defence,’ he said.

‘This likely comes at some metabolic cost to the caterpillar.’

In high enough quantities, the pyrrolizidine alkaloids in ragwort can be very harmful to birds if ingested.

‘But the cinnabar’s toxicity doesn’t need to be fatal to birds to get them to not eat them; they just need to taste bad enough, or produce ill effects, that birds don’t bother eating them again.’

The study was conducted in various urban green spaces in and around Bristol.

There were two designs –’artificial cinnabar caterpillars’ (with a yellow and black striped pattern) and ‘non-signalling fake caterpillar targets’ (brown).

‘Non-signalling refers to their brown colouration, whereas our cinnabar-like targets had a yellow and black stripey warning signal,’ said McLellan.

Researchers didn’t use real cinnabar caterpillars because they needed the targets to stay in place, and to change their specific colour. 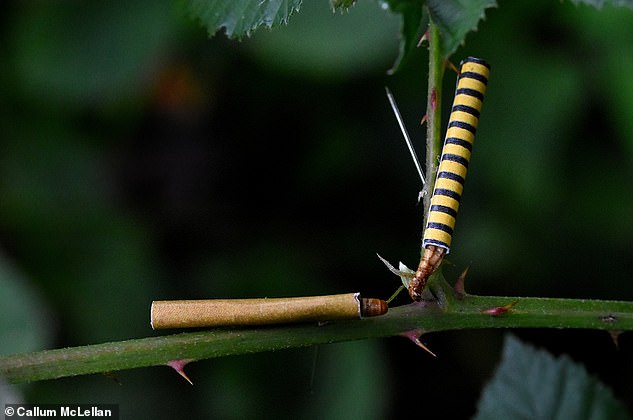 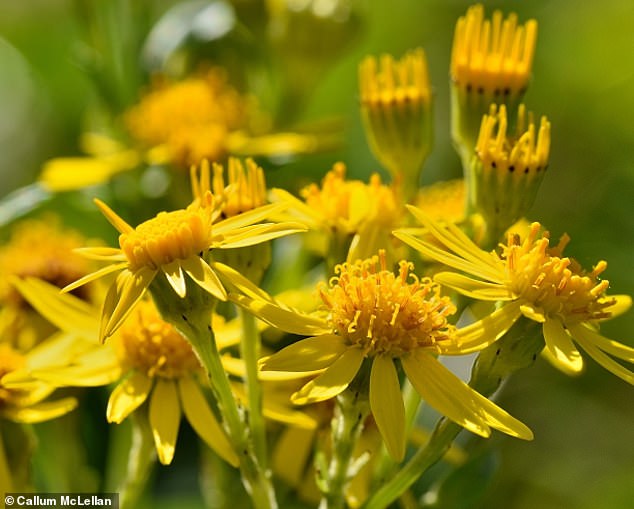 Pictured is ragwort, a plant that’s poisonous to birds and other animals. Cinnabar caterpillars feast upon ragwort without ill effect, despite its toxicity

They put the fake caterpillars on ragwort plants, as well as bramble, a non-toxic plant that is not a natural host of the cinnabar.

The study relied on wild, local birds to eat the targets, but the researchers did not identify the specific bird species that did the eating.

The ‘caterpillars’ survived better on ragwort compared to bramble when experienced predators were abundant – suggesting birds know not to go for the poisonous ragwort. 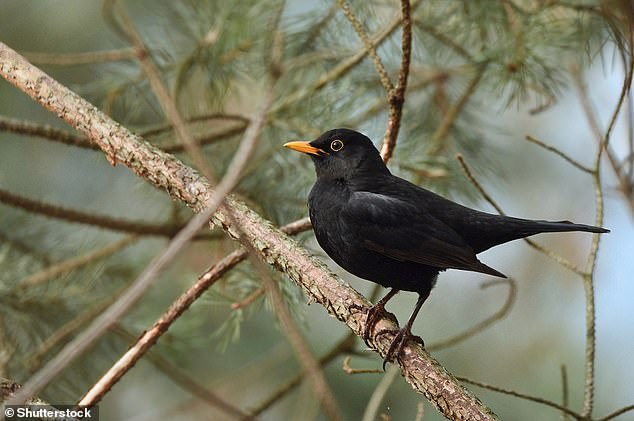 The most likely predators in the local vicinity were passerines, such as robins, tits and blackbirds (pictured)

The researchers were also interested in whether birds use the bright yellow flowers of ragwort as a cue for avoidance.

They cleverly tested this by removing spikes of the ragwort yellow flowers and pinning them onto the bramble, then recording caterpillar ‘survival’ on either plant.

‘Similarly, our brown targets survived better on bramble with added ragwort flowers, compared to those on plain bramble without added flowers.’

This finding suggests that birds are using the appearance of ragwort flowers to avoid eating prey on these plants, according to McLellan.

However, there was no difference to the survival of the fake yellow-and-black target, suggesting that a ‘prey warning signal is still more important to birds than flower cues’, he added.

The study has been published today in Current Biology.

Birds learn to avoid potentially toxic and distasteful food by watching the behaviour of other birds, a 2020 study reported.

Seeing the ‘disgust response’ from other birds on TV screens helped them avoid unpleasant-tasting food, such as bitter almonds.

Blue tits learned best by watching their own species, while great tits learned just as well from blue tits and other grey tits.

The study involved 48 blue tits and 39 great tits from the wild, each placed inside a wooden box with a perch opposite a TV screen.