Bidding for the ‘Nintendo PlayStation’ prototype is already over $350,000 just 24 hours after the ultra-rare collector’s item went up for auction

The super-rare console, which is being sold with a Sony-branded SNES controller and cartridge that enables CD-Rom functionality, only went up for bids on Thursday.

Potential buyers have 21 days left to bid on the console, which is being auctioned off by Dallas-based Heritage Auctions on March 6.

The collectors’ item is a rare artefact from a brief collaboration between the Japanese gaming giants before they took separate paths in the video game market. 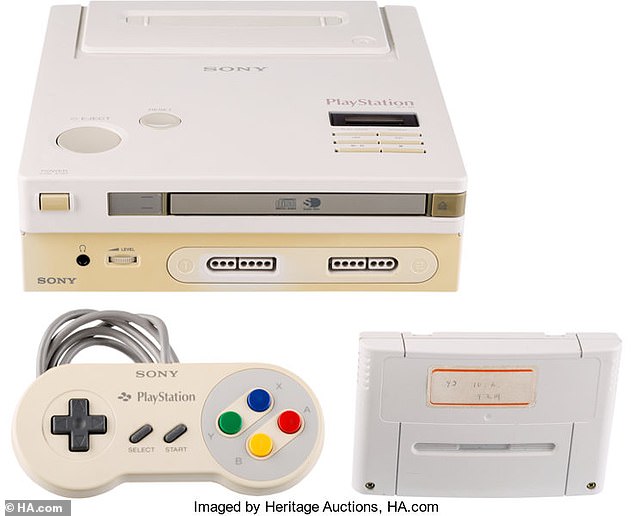 The rare ‘SNES-PlayStation’ was one of 200 prototypes made – and the rest are thought to be destroyed. The item comes with a PlayStation-branded controller and cartridge that enables CD-Rom functionality

‘By far, this is arguably one of the most notorious, mysterious, and controversial artefacts of the video game industry,’ Heritage Auctions says.

‘At one point, this dual-branded prototype’s existence was mere myth, and this is the very first time it will ever be offered at public auction.’

The unreleased console, which features Sony branding and the first use of the word ‘PlayStation’, marks the first chapter of Sony’s foray into the home console video game market.

Nintendo had approached Sony to develop a CD-ROM add-on for its upcoming Super Nintendo Entertainment System (SNES), but the idea didn’t come to fruition before console’s release in 1990.

The companies continued their collaboration nevertheless, culminating in this SNES-PlayStation prototype, which was revealed at the Consumer Electronics Show (CES) in June 1991.

But disputes caused the cancellation of the project shortly after, and Sony went on to launch its wildly successful PlayStation in 1994.

Palmer Luckey, 27-year-old millionaire and founder of Facebook’s Oculus VR platform, tweeted that he had placed a bid on the console Friday morning, but he has since been outbid.

‘Who are the other nutters who keep bidding against me?’ he said.

‘The Nintendo PlayStation is very, very cool, but I can only think of a handful of other people who think it is $300k worth of cool.’ 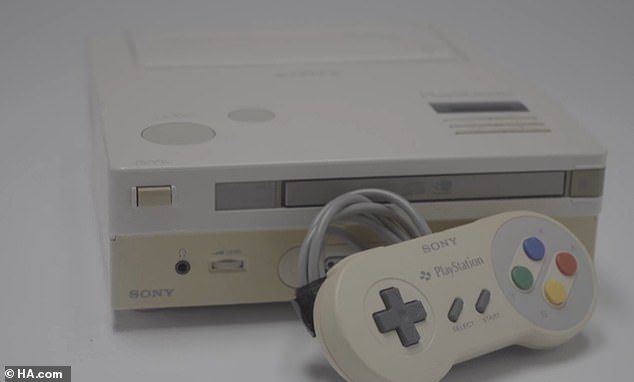 Luckey wasn’t even born when the SNES-PlayStation was originally revealed at CES 1991.

This particular prototype is thought to be the last out of about 200 that were made, as the remaining 199 were reportedly destroyed when the partnership soured.

SNES-PlayStation has a game cartridge slot and a CD-ROM disc drive, both of which are in working order.

‘We at Heritage can attest the prototype is working, as we’ve played a couple of rounds of Mortal Kombat on it using a Super Famicom cartridge,’ Heritage Auctions says on the lot’s bidding page.

While no games were officially made for the SNES-PlayStation, the prototype does play CDs and the cartridge slot works for SNES games.

A small screen on the top of the console shows the user which track is being played on the CD next to buttons, allowing the user to skip to the next track and and play a cartridge game at the same time.

It also has a headphone port and independent volume dial on the front of the console, to the left of the two controller ports. 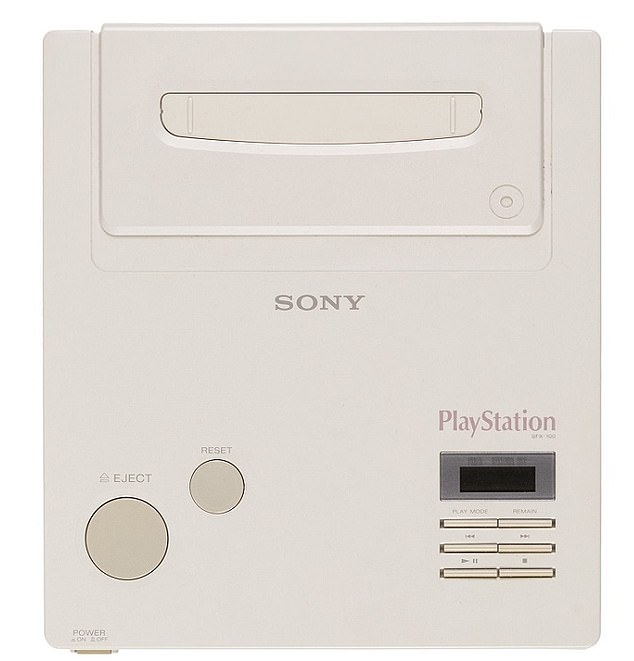 The plastic and flame retardant that were used to make the console have gradually given it a yellowish tinge after 30 years.

This unit was owned by the founder and first CEO of Sony Computer Entertainment, Inc, Olaf Olaffson, who later became a member of the board of directors at Advanta, an American bank.

When Mr Olaffson left Advanta he left the prototype behind, and it was later acquired by former Advatna worker Terry Diebold when the company went bankrupt.

Though the CD-ROM drive was not working when Mr Diebold acquired the console in 2009, it was repaired by Ben Heck, a YouTube personality known for his console repair videos.

Mr Diebold had had the SNES PlayStation in his possession ever since, and toured it at vintage game conventions worldwide before finally deciding to put it up for sale.

Mr Diebold told Kotaku back in December that he turned down $1.2 million (around £1 million) from ‘someone in Norway’ to be able to put it up for auction.

‘Even though this is the closing of this portion of its narrative, it will continue to remain a pivotal piece of video game history no matter where it ends up,’ Heritage Auctions says.

Sony’s PlayStation 5 is due to be released this Christmas.

THE HISTORY OF PLAYSTATION

1988: Sony and Nintendo originally began discussions to develop a CD-ROM add-on for the Super Nintendo Entertainment System. The idea didn’t come to fruition before the SNES was released in 1990.

1991: At the Consumer Electronics Show in Chicago, Sony revealed a prototype SNES with a built-in CD-ROM drive – now known as the ‘SNES PlayStation’. However, only the next day Nintendo announced it had broken its deal with Sony, opting instead to partner Philips, Sony’s rival in consumer electronics.

1994: The original PlayStation launched in Japan on December 3 and in the US and Europe the following year.

2000: Sony launched the PlayStation 2 a year before its other competitors, Microsoft’s Xbox and the Nintendo GameCube, and became the most successful home console in the world, selling 155 million units by 2012.

2006: Sony released the PlayStation 3, the first console in the series to introduce the use of motion-sensing technology.

2013: Sony released the PlayStation 4 (PS4), a next-generation console designed to compete with the Xbox One.

2020: Sony plans to release the PS5 around Christmas next year.