Beavers are contributing to global warming by building dams in the Arctic that melt the permafrost and release greenhouse gases into the atmosphere, study warns

Over the last few years, beavers have expanded into many tundra regions where they had never been seen before, due to an abundance of vegetation.

But they are also building more dams in their new homes, creating a host of new lakes which thaw permafrost – permanently frozen ground – and release trapped gases like carbon dioxide and methane into the atmosphere, contributing to global warming.

German and US researchers studied satellite images of a roughly 38-square-mile area of land near the town of Kotzebue on Alaska’s Baldwin Peninsula, spanning 17 years. 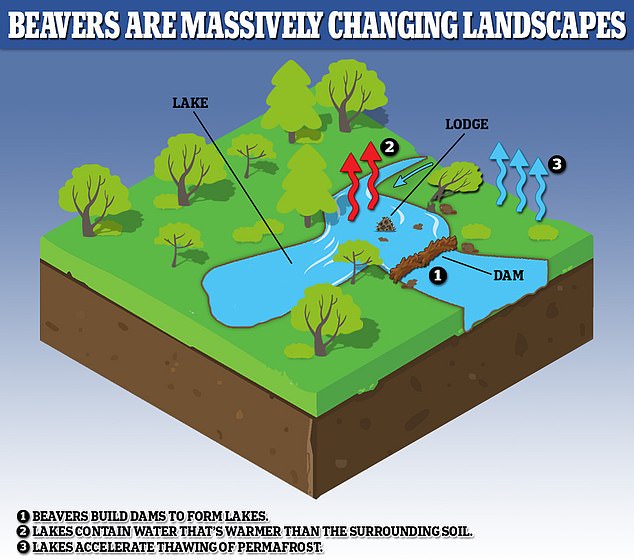 Higher temperatures leads to more shrub land for beavers in the Arctic tundra. Beavers therefore are building dams in more areas, but the resulting bodies of water are warmer than the surrounding permafrost – ground that remains completely frozen. The warmer lakes therefore accelerate the thawing of permafrost, which releases greenhouse gases like carbon dioxide and methane. 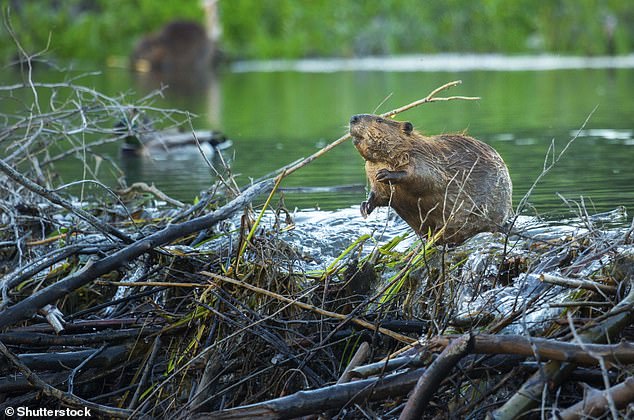 A North American beaver (Castor canadensis) works on its dam. This species is active in the Arctic regions of Alaska

‘Their methods are extremely effective,’ said Dr Ingmar Nitze from the Alfred Wegener Institute for Polar and Marine Research (AWI) in Potsdam in Germany.

‘Of course, we knew that the beavers there had spread substantially over the last few decades.

‘But we never would have dreamed they would seize the opportunity so intensively.

‘Anyone who wants to predict the future of the permafrost should be sure to keep the beaver in mind.’ 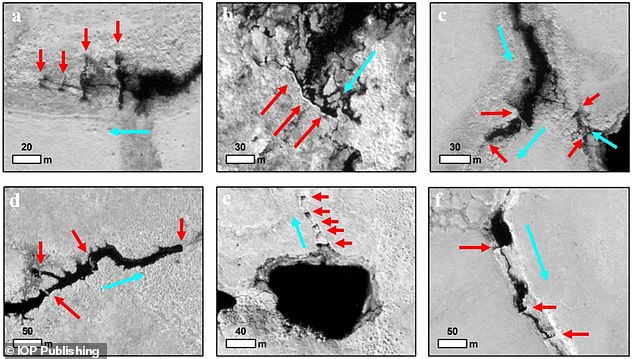 Mapping beaver dams in high-resolution satellite imagery available for the northern Baldwin Peninsula, Alaska. The location of individual dams are indicated with red arrow and the flow direction with a light blue arrow 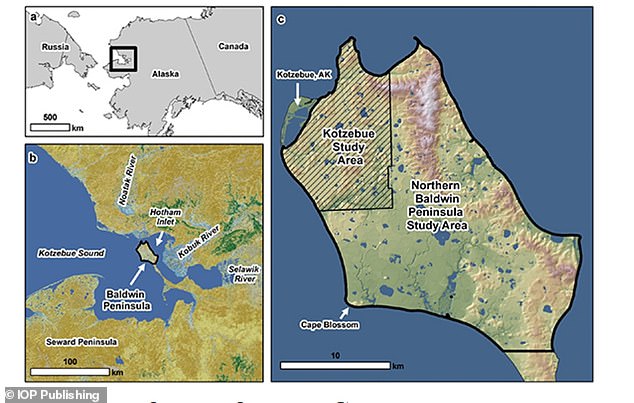 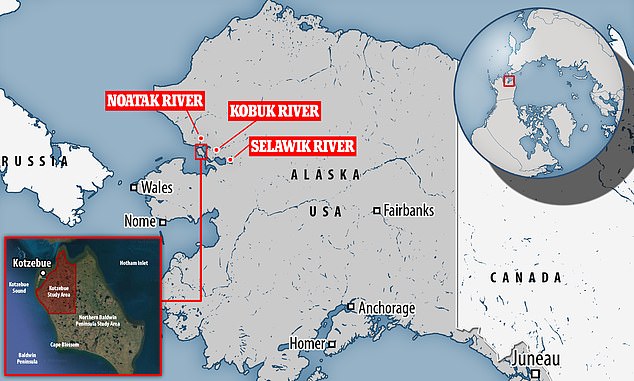 As the Earth warms, scientists worry that some of the carbon in permafrost could escape to the atmosphere as carbon dioxide or methane.

Increasing the amount of these gases in the atmosphere could make Earth’s climate warm up even more.

The furred rodents, which can weigh up to 30kg (66lbs), are armed with sharp teeth to fell trees and shrubs and build dams.

These dams offer protection for the semi-aquatic beavers against predators such as wolves and bears by creating a big body of water.

Beavers build their lodges in the middle of these water bodies, which are made from mounds of sticks and mud just like dams.

But dams cause small valleys to fill with water and form new lakes, which can easily measure a few hectares.

There are only two species of beaver – the Eurasian beaver and the slightly smaller North American, which is active in the Arctic regions of Alaska.

The Eurasian beaver is native to the UK and used to be widespread in England, Wales and Scotland, although UK charities are now engaging in beaver reintroduction projects.

This is partly due to climate change, as rising temperatures mean more habitats offer the shrubs that the animals need for food and building material.

In the summer, increased warmth and longer growing seasons have been linked to increases in tundra productivity and shrub-dominated vegetation over the last three decades, attracting beavers.

But the beavers’ dams are warmer than the surrounding permafrost – ground that remains completely frozen (32°F (0°C) or colder) for at least two years straight.

The warmer lakes therefore accelerate the thawing of permafrost, which releases the greenhouse gases. 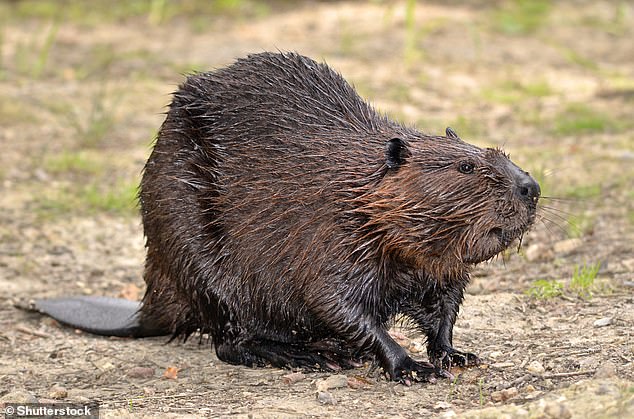 The team have used detailed satellite data to track North American beaver activity in two other regions of Alaska to observe where this cycle is taking place.

The lakes, which used to freeze solid, are now more beaver-friendly thanks to the thinner layer of ice covering the top at winter.

Beavers also aren’t hunted as intensively as in the past, meaning ‘it’s a good time to be a beaver in the Arctic’, according to the AWI.

As well as a 5,000 per cent increase in beaver dams on a section of the peninsula, the larger area surveyed also experienced a beaver dam boom, which has affected the water balance.

Beavers intentionally do their work in parts of the landscape that they can most easily flood.

To do so, sometimes they dam up small streams or the outlets of existing lakes, which expand as a result, but they especially prefer drained lake basins.

‘The animals have intuitively found that damming the outlet drainage channels at the sites of former lakes in an efficient way to create habitat,’ said study lead author Benjamin Jones at the University of Alaska Fairbanks.

‘So a new lake is formed which degrades ice-rich permafrost in the basin, adding to the effect of increasing the depth of the engineered water body.’ 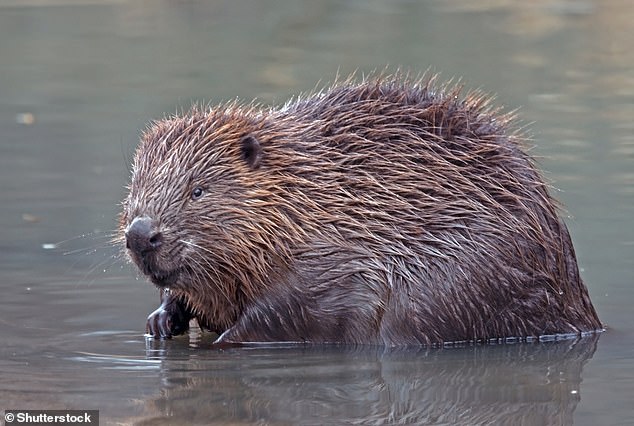 In the course of the 17-year time frame studied, the overall water area in the Kotzebue region grew by 8.3 per cent – roughly two-thirds of which was due to beavers.

The research team say there have been similar construction booms in other regions of the Arctic and they now want to expand their ‘beaver manhunt’ across the Arctic.

‘The growth in Canada, for example, is most likely even more extreme,’ said Dr Nitze

While the frozen soil could theoretically bounce back after a few years when the beaver dams eventually break, conditions may not be cold enough for that to happen.

The study has been published in Environmental Research Letters.

HOW AND WHY DO BEAVERS BUILD DAMS?

Beavers are found across the northern hemisphere and are among planet’s most skilled builders.

This reputation has earnt them the nickname ‘nature’s engineers’.

They fell trees by gnawing at their trunks and use the resulting sticks to construct dams to stop the movement of water in ponds, lakes, rivers and streams – creating a bodies of water with a low current.

The mammals then use sticks and mud to create a second structure – a large dome-shaped island that can reach as high as ten feet (3m) tall and up to 1,600ft (500m) long.

Each island includes two underwater entrances and a living chamber above water where the animals sleep and shelter.

Beavers often line the walls of this chamber with dry leaves and plants to insulate it during winter.

It remains unclear exactly why beavers build dams, but scientists speculate the creatures use it for warmth and shelter in the winter and as protection from predators.

Beavers are strong swimmers, and creating a reservoir of water allows the animals to play to their strengths to escape those higher in the food chain.

The biggest beaver dam ever discovered measured 2,790ft (850m) – more than twice the length of the Hoover dam.

The woodland construction, found in the southern edge of Wood Buffalo National Park in Northern Alberta, Canada, was so expansive it could be seen from space.