It was supposed to be the latest round in the battle of the space billionaires.

However, both Elon Musk’s SpaceX and Blue Origin, the space firm set up by Amazon’s Jeff Bezos, were forced to cancel launches after postponing them yesterday. 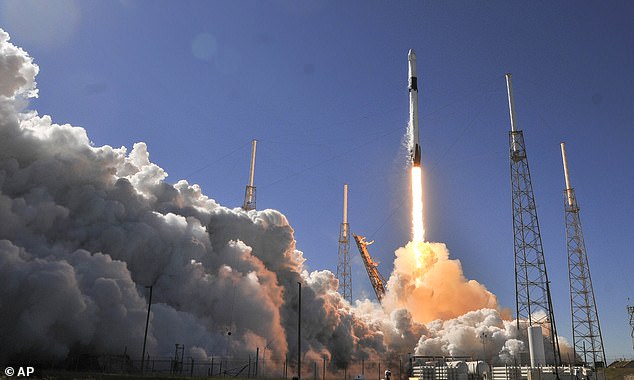 However, SpaceX said on Twitter it was standing down from the launch attempt of the GPS III to further evaluate an ‘out of family’ reading on the rocket’s first-stage sensors and would confirm a new launch date once that review was complete.

Earlier in the day Blue Origin, backed by Jeff Bezos,  said it was ‘still working through ground infrastructure issues and monitoring incoming weather in West Texas.’

It added it was  ‘Slating next launch window NET Friday 12/21 pending further review.’

Blue Origin was due to bring its New Shepard vehicle back to Earth for a landing after launch to recover all the data collected (and, of course, the rocket itself).

The experiments on board will study things like the vibrations experienced during spaceflight, a new way to measure fuel levels in microgravity and how to better work with scientific samples in space.

The rocket was due to blast off at the same time as SpaceX, 9:30AM, but 30 minutes before launch Blue Origin announced it had scrubbed the launch for the day ‘due to a ground infrastructure issue.’

SpaceX halted Tuesday’s launch of a long-delayed navigation satellite for the U.S. military, postponing for at least a day the space transportation company’s first designated national security mission for the United States.

‘This abort was triggered by the onboard Falcon 9 flight computer,’ a SpaceX official narrating the launch sequence said without providing additional details.

He said SpaceX would attempt the launch on Wednesday morning.

If the mission is successful it will mark a victory for Musk, a billionaire entrepreneur who has tried for years to break into the market for lucrative military space launches, long dominated by Lockheed and Boeing Co.

The richest man in the world, Jeff Bezos is pursuing Blue Origin with vigour as he tries to launch his ‘New Glenn’ rocket into low-Earth orbit by 2020.

Whilst Bezos is yet to leave the atmosphere of Earth, despite several successful launches, Elon Musk’s SpaceX programme has already sent the Falcon Heavy rocket into space.

On February 6 2018, SpaceX sent the rocket towards the orbit of Mars, 140 million miles away.

On board was a red Tesla roadster that belonged to Musk himself.

SpaceX have won several multi-million dollar contracts from Nasa as the space agency hopes to use the rockets as a fast-track for its colonisation of the red planet.

The billionaire mogul also said he expects Elon Musk to win the race to Mars with his private rocket firm SpaceX.

SpaceShipTwo will carry six passengers and two pilots. Each passenger gets the same seating position with two large windows – one to the side and one overhead.

A climb to 50,000ft before the rocket engine ignites. Passengers become ‘astronauts’ when they reach the Karman line, the boundary of Earth’s atmosphere, at which point SpaceShipTwo separates from its carrier aircraft, White Knight II.

The spaceship will then make a sub-orbital journey with approximately six minutes of weightlessness, with the entire flight lasting approximately 3.5 hours.

SpaceX sued the U.S. Air Force in 2014 in protest over the military’s award of a multibillion-dollar, non-compete contract for 36 rocket launches to United Launch Alliance, a partnership of Boeing and Lockheed.

SpaceX dropped the lawsuit in 2015 after the Air Force agreed to open up competition, according to SpaceX’s website.

The next year, SpaceX won a $83 million Air Force contract to launch the GPS III satellite, which will have a lifespan of 15 years, Air Force spokesman William Russell said by phone.

Tuesday’s launch was to be the first of 32 satellites in production by Lockheed under contracts worth a combined $12.6 billion for the Air Force’s GPS III program, Lockheed spokesman Chip Eschenfelder said.

U.S. Vice President Mike Pence traveled to Florida to attend the launch, which he called ‘an important step forward as we seek to secure American leadership in space.’

GOING TO SPACE WITH BLUE ORIGIN: HOW IT WORKS

The two vehicles launch together, accelerating for approximately two and a half minutes, before the engine cuts off.

The capsule then separates from the booster to coast quietly into space.

After a few minutes of free fall, the booster performs an autonomous rocket-powered vertical landing.

The passenger capsule lands softly under parachutes, both ready to be used again.

Like previous Blue origin launches, the New Shepard rocket fired into orbit (one) before disconnecting from the passenger capsule (two), and then landing vertically (four and five) back on the launch pad. Shortly after this, the ‘Crew Capsule 2.0’ pod floated back to the ground (six)

‘Once fully operational, this latest generation of GPS satellites will bring new capabilities to users, including three times greater accuracy and up to eight times the anti-jamming capabilities,’ said Russell.

The GPS satellite launch was originally scheduled for 2014 but has been hobbled by production delays, the Air Force said.

The next GPS III satellite will launch in mid-2019, Eschenfelder said, while subsequent satellites undergo testing in the company’s Colorado processing facility.

The Hawthorne, California-based company has previously launched payloads for the Department of Defense in 2017 that were not designated as a National Security Space missions.