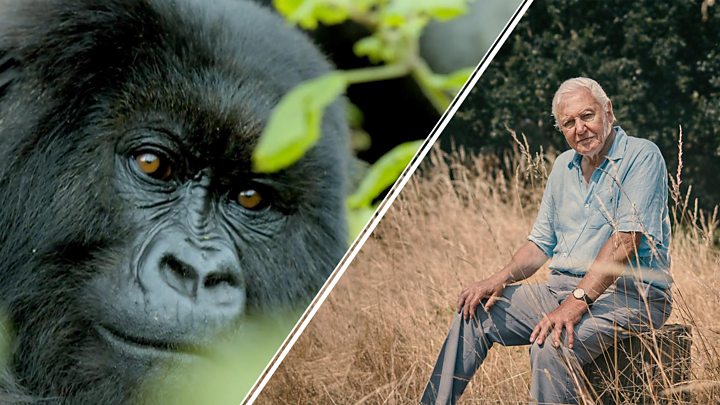 Sir David Attenborough returns to our screens this weekend with a landmark new production.

The tone of the programme is very different from his usual work.

For once Britain’s favourite naturalist is not here to celebrate the incredible diversity of life on Earth but to issue us all with a stark warning.

The one-hour film, Extinction: The Facts, will be broadcast on BBC One in the UK on Sunday 13 September at 20:00 BST.

“We are facing a crisis”, he warns at the start, “and one that has consequences for us all.”

What follows is a shocking reckoning of the damage our species has wrought on the natural world.

There are the stunning images of animals and plants you would expect from an Attenborough production, but also horrific scenes of destruction.

In one sequence monkeys leap from trees into a river to escape a huge fire.

In another a koala bear limps across a road in its vain search for shelter as flames consume the forest around it.

There is a small army of experts on hand to quantify the scale of the damage to the ecosystems of the world.

Of the estimated eight million species on Earth, a million are now threated with extinction, one expert warns.

Since 1970, vertebrate animals – birds, mammals, reptiles, fish and amphibians – have declined by 60%, another tells us.

These great beasts used to be found in their thousands in Central Africa but have been pushed to the brink of extinction by habitat loss and hunting.

“Many people think of extinction being this imaginary tale told by conservationists,” says James Mwenda, the keeper who looks after them, “but I have lived it, I know what it is.” 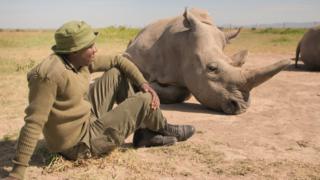 James strokes and pets the giant animals but it becomes clear they represent the last of their kind when he tells us that Najin and Fatu are mother and daughter.

Species have always come and gone, that’s how evolution works. But, says Sir David, the rate of extinction has been rising dramatically.

It is reckoned to be now happening at one hundred times the natural evolutionary rate – and is accelerating.

“Over the course of my life I’ve encountered some of the world’s most remarkable species of animals,” says Sir David, in one of the most moving sequences in the film.

“Only now do I realise just how lucky I’ve been – many of these wonders seem set to disappear forever.”

Crisis in the natural world

Sir David is at pains to explain that this isn’t just about losing the magnificent creatures he has featured in the hundreds of programmes he has made in his six decades as a natural history film-maker.

The loss of pollinating insects could threaten the food crops we depend on. Plants and trees regulate water flow and produce the oxygen we breathe. Meanwhile, the seas are being emptied of fish.

There is now about 5% of trawler-caught fish left compared with before the turn of the 20th century, one expert says.

But the pandemic provides perhaps the most immediate example of the risks of our ever-increasing encroachment into the natural world, as we have all been learning in the most brutal fashion over the last six months.

The programme tracks the suspected origins of coronavirus to populations of bats living in cave systems in Yunnan province in China.

We see the Chinese “wet market” in Wuhan which specialises in the sale of wild animals for human consumption and is thought to have been linked with many of the early infections.

The programme is uncompromising in its depiction of the crisis in the natural world, admits Serena Davies, who directed the programme.

“Our job is to report the reality the evidence presents,” she explains.

But the programme does not leave the audience feeling that all is lost. Sir David makes clear there is still cause for hope.

“His aim is not to try and drag the audience into the depths of despair,” says Ms Davies, “but to take people on a journey that makes them realise what is driving these issues we can also solve them.”

The programme ends in iconic style.

We see one of the most celebrated moments in all the films Sir David has made in his long career, the moment he met a band of gorillas in the mountains on the border between the Democratic Republic of Congo and Rwanda.

A young gorilla called Poppy tries to take off his shoes as he speaks to the camera.

“It was an experience that stayed with me,” says Sir David, “but it was tinged with sadness, as I thought I might be seeing some of the last of their kind.”

The programme makers have been back to Rwanda and, after a long trek, spot Poppy’s daughter and granddaughter in the deep forest scrub.

We learn that the Rwandan government has worked with local people to protect the animal and that the gorillas are thriving.

It shows, says Sir David, what we can achieve when we put our minds to it.

“I may not be here to see it,” he concludes, “but if we make the right decisions at this critical moment, we can safeguard our planet’s ecosystems, its extraordinary biodiversity and all its inhabitants.”

His final line packs a powerful punch: “What happens next”, says Sir David, “is up to every one of us.”

You can see David Attenborough’s, Extinction: The Facts, on BBC One in the UK on Sunday 13 September at 20:00 BST.