Astronomers have published the largest and most complete 3D map of the Universe ever created.

It includes more than four million individual galaxies and ultra-bright quasars and is the result of two decades of research from an international team of researchers.

The map provides an accurate look at the scale and expansion of the universe from shortly after the Big Bang onwards. 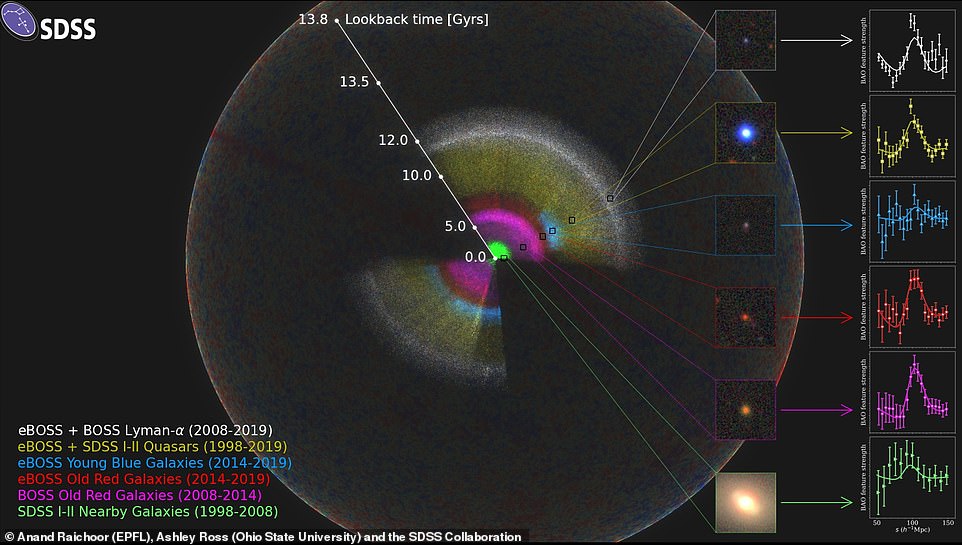 Pictured, the SDSS map. It is colour-coded to represent different types of galaxies and how they were spotted. The key for colours and galaxy type is in the bottom left. The images on the right are examples of each type of galaxy seen 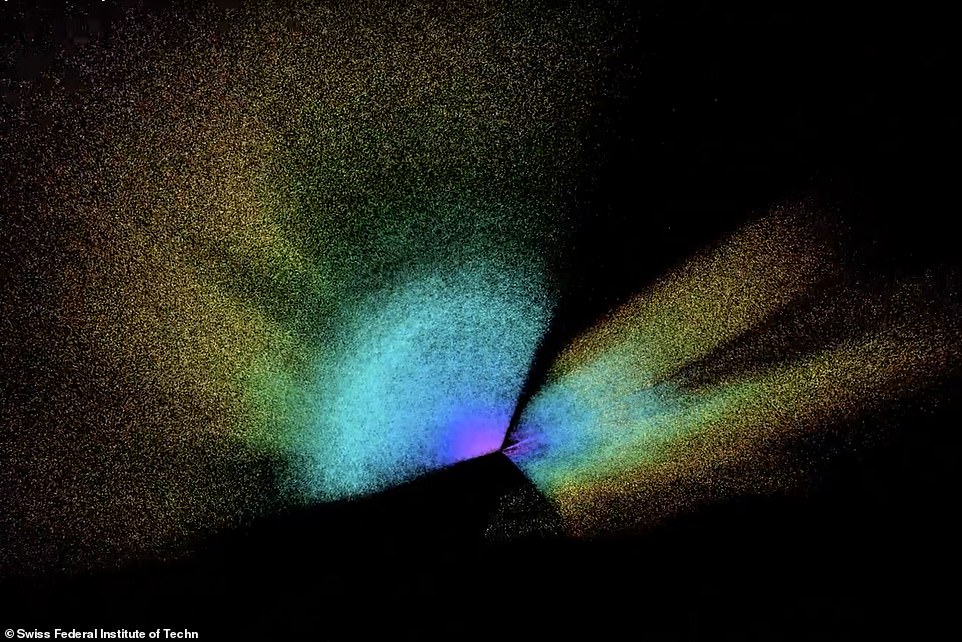 Pictured, a still image taken from the animation released by the Swiss Federal Institute of Technology Lausanne (EPFL). It shows a map of the universe in expansion

Will Percival of the University of Waterloo in Ontario, Canada, who was involved in the project, said it yields a ‘complete story of the expansion of the universe’.

Lots is known about the earliest portion of the universe’s life as many researchers have studied the Big Bang.

However, there has always been a gap in knowledge in the middle portion of the universe’s existence, lasting around 11 billion years.

Kyle Dawson of the University of Utah said the map was partly created in an attempt to tackle this ‘troublesome gap’.

Researchers from the University of Manchester found that the pulsar – a type of neutron star – and a white dwarf accelerated to another star at the same pace.

This is the strong equivalence principle – it says any two objects in the same gravitational field will fall with the same acceleration regardless of their mass.

There was speculation that this wouldn’t apply in particularly extreme environments, such as those of pulsars – a type of neutron star, but this study proves it holds true.

It’s also known as freefall and this is the second time the theory has been shown to be accurate – the first was from observations of a star orbiting a black hole.

Through ‘five years of continuous observations, we have worked to fill in that gap, and we are using that information to provide some of the most substantial advances in cosmology in the last decade,’ he said.

Astrophysicist Jean-Paul Kneib of the Swiss Federal Institute of Technology (EPFL) in Lausanne, who initiated eBOSS in 2012, said the goal was to produce ‘the most complete 3D map of the Universe throughout the lifetime of the Universe’.

The map, published as a still image and also as a 3D animation, focues on four main categories of celestial objects.

The first are galaxies near Earth, but to create the part of the map dating back up to six billion years, the team also studied large, red galaxies.

Farther out, they used blue galaxies and finally, to map the Universe eleven billion years in the past and more, they used quasars.

Quasars are super-bright galaxies lit up by material falling onto a central supermassive black hole.

Dark swathes on the map are areas where the astronomers cannot see because observations were blocked by the Milky Way.

But the map reveals that the expansion of the Universe began to accelerate at some point and has since continued to do so.

The researchers said this seems to be due to the presence of dark energy, an invisible element that fits into Albert Einstein’s general theory of relativity but whose origin is not yet understood.

Astrophysicists have known for years that the Universe is expanding, but have been unable to measure the rate of expansion with precision.

Comparisons of the eBOSS observations with previous studies of the early universe have revealed discrepancies in estimates of the rate of expansion.

The currently accepted rate, called the ‘Hubble constant’, is ten per cent slower than the value calculated from the distances between the galaxies closest to us.