A ‘ridiculously detailed’ image of the moon that captures its craters, colours and textures has been shared ahead of NASA’s Artemis I launch next week.

The 174-megapixel picture was put together by two American astrophotographers who combined more than 200,000 individual moon shots into one image.

Arizona-based Andrew McCarthy worked with planetary scientist and fellow space photographer Connor Matherne to create the image as a ‘collaborative tribute’ to mark the launch of the US space agency’s giant new moon rocket next Monday.

The first uncrewed test of the Space Launch System (SLS) super heavy-lift rocket – which will ultimately take humans back to the lunar surface – will blast off from Cape Canaveral in Florida. 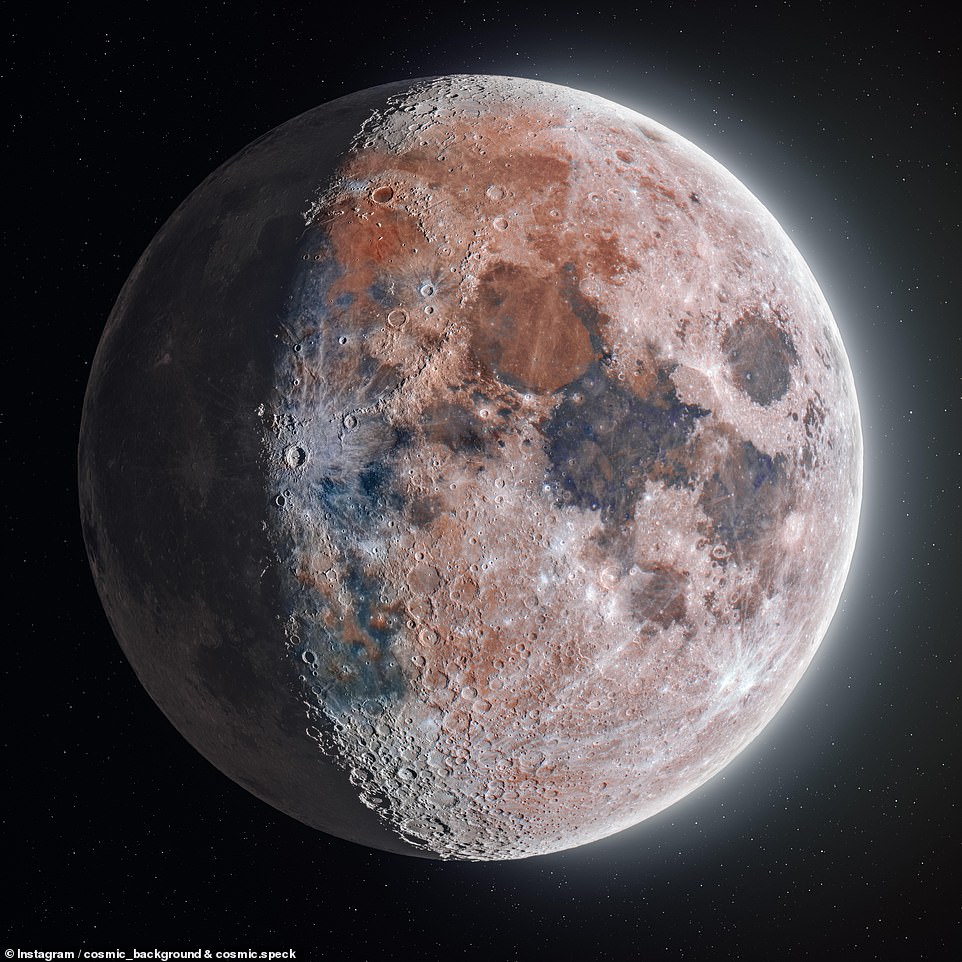 Mind-blowing: A ‘ridiculously detailed’ image of the moon that captures its craters, colours and textures has been shared ahead of NASA’s Artemis I launch next week

The moon is Earth’s only natural satellite, circling in a slightly elliptical orbit at 2,300 miles (3,700 kilometres) per hour.

Although it doesn’t revolve around the sun, because of its size and composition, planetary scientists call the moon a ‘terrestrial planet’ – akin to Mercury, Venus, Earth and Mars.

Unlike the Earth, the moon does not have a significant magnetic field, and it has no significant atmosphere.

This means its unprotected regolith (dust on the surface) is constantly being bombarded by the solar wind.

The sun continuously embeds chemical elements, such as hydrogen ions, into the lunar surface.

Thus, by studying the surface of the moon, scientists can learn a lot about the sun.

Mr McCarthy tweeted: ‘Two years ago, I teamed up with fellow astrophotographer and planetary scientist @MatherneConnor to capture the most ridiculously detailed moon image we could.

‘Over the last few months we put our heads together again to come up with something even clearer. Behold:’

He attached the image of the moon in spectacular detail.

Mr McCarthy also added: ‘This image is a love letter to the upcoming Artemis 1 mission, the first human-rated lunar launch vehicle in 50 years.

‘Sadly, I couldn’t upload the full details to twitter, so here’s a close crop of the surface. It’s also the largest print I’ve ever done!’

All of the photos were taken on a single evening, with Mr McCarthy and Mr Matherne then spending nine months editing and compiling their work to make the finished article.

‘When he and I put our heads together we were able to make something a little off brand for both of us, which is cool,’ Mr McCarthy told NPR.

‘The whole thing is assembled like a mosaic, and each tile is made up of thousands of photos.’

He said that while he took thousands of pictures revealing intricate details of the lunar surface, Mr Matherne concentrated on the moon’s colours.

Mr McCarthy added that while only ‘basic’ equipment – a camera, tripod and star tracker – was needed to capture the image, the pair also had to have patience to wait for perfect sky conditions, free from light pollution.

After launching atop NASA’s SLS rocket from the Kennedy Space Center, the Orion spacecraft will fly more than 250,000 miles to the moon before coming within just 62 miles of its surface.

The craft – which was primarily built by Lockheed Martin – will stay in space ‘longer than any ship for astronauts has done without docking to a space station and return home faster and hotter than ever before,’ the US space agency has said.

The mission is designed to show that the SLS rocket and Orion capsule are ready to carry astronauts.

If Artemis I is a success, NASA will then send Artemis II on a trip around the moon as early as 2024, this time with a human crew on board.

The Artemis II mission plans to send four astronauts into a lunar flyby for a maximum of 21 days.

Both missions are test flights to demonstrate the technology and abilities of Orion, SLS and the Artemis mission before NASA puts human boots back on the moon in around three years’ time.

This will include the first woman and first person of colour to walk on the lunar surface.

Ten shoebox-size secondary payloads, called CubeSats, are hitching a ride to space on Artemis I’s SLS rocket, and several other investigations are flying inside the Orion spacecraft during the flight test.

Each of the payloads will perform science and technology experiments in deep space, expanding understanding of lunar science, technology developments, and deep space radiation.