A distant galaxy that looks ‘surprisingly like our Milky Way’, has been discovered by astronomers, who say it appears like a near-perfect ring of light in space.

The galaxy is so far away that its light has taken more than 12 billion years to reach us and we are seeing it when the universe was just 1.4 billion years old.

Named SPT0418-47, it is surprisingly unchaotic, contradicting theories all galaxies in the early universe were turbulent and unstable, according to astronomers.

The discovery shows structures in our Milky Way and other spiral galaxies were already in place 12 billion years ago when the universe was young, authors say. 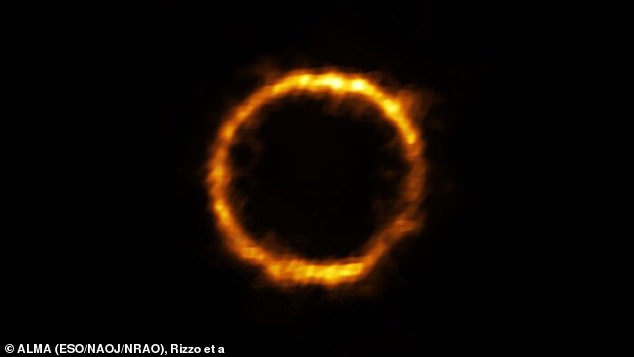 Astronomers using ALMA, in which the ESO is a partner, have revealed an extremely distant galaxy that looks surprisingly like our Milky Way

While the galaxy the astronomers studied doesn’t appear to have spiral arms, it has at least two features typical of our Milky Way – a bulge and rotating disc.

A bulge is the large group of stars packed tightly around the galactic centre of spiral galaxies – seen as a white blob in the Milky Way.

This is the first time a bulge has been seen this early in the history of the Universe, making SPT0418-47 the most distant Milky Way look-alike.

‘The big surprise was to find that this galaxy is actually quite similar to nearby galaxies, contrary to all expectations from the models and previous, less detailed, observations,’ says co-author Filippo Fraternali.

The astronomer from the University of Groningen in the Netherlands said young galaxies in the early universe were still in the process of forming.

The observations indicate that SPT0418-47 is a disc galaxy with a central bulge and the material in it rotates around the centre. Gas moving away from us is shown in red, while gas moving in the direction of the observer is shown in blue

That led researchers to expect them to be chaotic and lacking the distinct structures typical of more mature galaxies like the Milky Way.

Studying distant galaxies like SPT0418-47 is fundamental to our understanding of how galaxies formed and evolved.

This galaxy is so far away we see it when the universe was just 10 per cent of its current age because its light took 12 billion years to reach Earth.

By studying the galaxy, we are going back to a time when these baby galaxies were just beginning to develop, according to the research team.

Because these galaxies are so far away, detailed observations with even the most powerful telescopes are almost impossible as the galaxies appear small and faint.

The team overcame this obstacle by using a nearby galaxy as a powerful magnifying glass – an effect known as gravitational lensing.

In this effect, the gravitational pull from the nearby galaxy distorts and bends the light from the distant galaxy, causing it to appear misshapen and magnified.

This allowed Earth-based ALMA to see into the distant past in unprecedented detail.

The gravitationally lensed, distant galaxy appears as a near-perfect ring of light around the nearby galaxy, thanks to their almost exact alignment.

The research team reconstructed the distant galaxy’s true shape and the motion of its gas from the ALMA data using a new computer modelling technique.

‘When I first saw the reconstructed image of SPT0418-47 I could not believe it: a treasure chest was opening,’ says Rizzo. 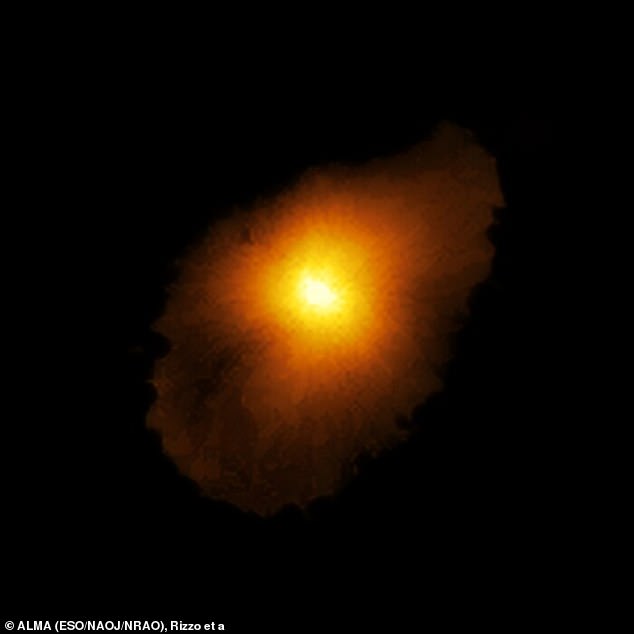 Astronomers using ALMA, in which the ESO is a partner, have revealed an extremely distant galaxy that looks surprisingly like our Milky Way. The galaxy, SPT0418-47, is gravitationally lensed by a nearby galaxy, appearing in the sky as a near-perfect ring of light

It was ‘ puzzling’, said co-author Simona Vegetti from the Max Planck Institute, who said it is the most well-ordered galaxy disc observed from the early universe.

‘This result is quite unexpected and has important implications for how we think galaxies evolve,’ the astrophysicist explained.

However, even though SPT0418-47 has a disc and other features similar to those of spiral galaxies we see today, they expect it to evolve into a galaxy very different from the Milky Way, and join the class of elliptical galaxies. 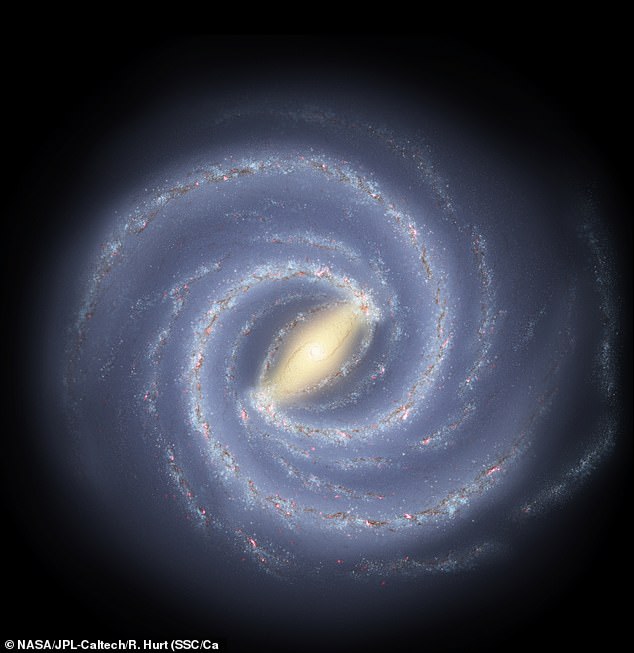 This unexpected discovery suggests the early Universe may not be as chaotic as once believed and raises many questions on how a well-ordered galaxy could have formed so soon after the Big Bang.

This ALMA finding follows the earlier discovery announced in May of a massive rotating disc galaxy seen at a similar distance.

SPT0418-47 is seen in finer detail than that galaxy thanks to the lensing effect.

It also has a bulge similar to the one in the centre of the Milky Way in addition to a disc, making it even more similar to our present-day galactic home.

Future studies, including with ESO’s Extremely Large Telescope, will seek to uncover how typical these ‘baby’ disc galaxies really are.

It will also allow astronomers to discover whether they are commonly less chaotic than predicted, opening up new avenues to discover how galaxies evolved.

The Big Bang Theory is a cosmological model, a theory used to describe the beginning and the evolution of our universe.

It says that the universe was in a very hot and dense state before it started to expand 13,7 billion years ago.

This theory is based on fundamental observations.

In 1920, Hubble observed that the distance between galaxies was increasing everywhere in the universe.

The Big Bang Theory is a cosmological model, a theory used to describe the beginning and the evolution of our universe, based on observations – including the cosmic background radiation (pictured), which is a like a fossil of radiation emitted during the beginning of the universe, when it was hot and dense

This means that galaxies had to be closer to each other in the past.

In 1964, Wilson and Penzias discovered the cosmic background radiation, which is a like a fossil of radiation emitted during the beginning of the universe, when it was hot and dense.

The cosmic background radiation is observable everywhere in the universe.

The composition of the universe – that is, the the number of atoms of different elements –  is consistent with the Big Bang Theory.

So far, this theory is the only one that can explain why we observe an abundance of primordial elements in the universe.