A star is born! Astronomers get the clearance view yet of a boiling cauldron where stars are formed

An expanding bubble of hot plasma and ionised gas surrounding a region of space where stars are born has been captured in high-resolution for the first time.

Data collected by the Stratospheric Observatory for Infrared Astronomy (SOFIA) telescope, attached to a modified 747 aircraft, allowed University of Maryland researchers to study and view this growing bubble in more detail.

It is powered by stellar winds surrounding the Westerlund 2 star cluster, 20,000 light years from Earth that contains the largest and brightest stars in the Milky Way.

Previous low-resolution data of this two million year old stellar nursery did not clearly show the bubble or reveal how it expanded into the surrounding gas.

Using multi-wavelength astronomy, including far-infrared observations, they got a detailed understanding of these bubbles of warm gas that are made of ionised carbon, finding they help drive further star formation from the hot gas.

The team believe this new information can help astronomers better understand how our universe formed and will look at other stellar clusters using the same technique. 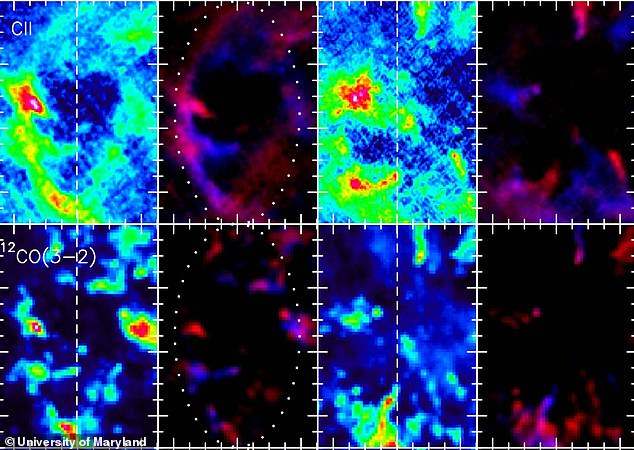 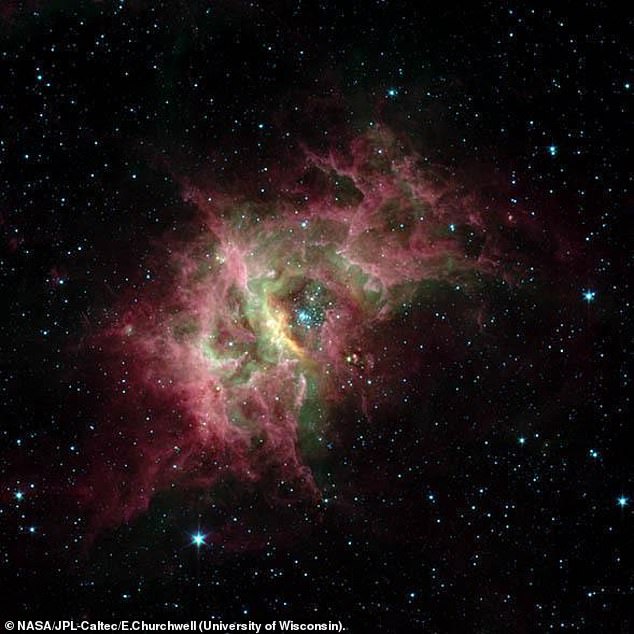 The RCW 49 galactic nebula pictured above is one of the brightest star-forming regions in the Milky Way. By analyzing the movement of carbon atoms in an expanding bubble of gas surrounding the Westerlund 2 star cluster within RCW 49, a UMD-led team of researchers have created the clearest image to date of a stellar-wind driven bubble where stars are born

The surfaces of these bubbles form a kind of outer shell around the bubbles, with new stars forming within the shells and overlapping and intermingling with clouds of surrounding gas – which has made it hard to distinguish bubbles in the past.

The team say this discovery, which required a wider range of electromagnetic frequency observations, lets them better understand how stars form.

‘When massive stars form, they blow off much stronger ejections of protons, electrons and atoms of heavy metal, compared to our sun,’ said Maitraiyee Tiwari, a postdoctoral associate and lead author of the study.

‘These ejections are called stellar winds, and extreme stellar winds are capable of blowing and shaping bubbles in the surrounding clouds of cold, dense gas.

‘We observed just such a bubble centred around the brightest cluster of stars in this region of the galaxy, and we were able to measure its radius, mass and the speed at which it is expanding.’

Tiwari and her colleagues created a clearer picture of the bubble surrounding Westerlund 2 by measuring the radiation emitted from the cluster across the entire electromagnetic spectrum, from high-energy X-rays to low-energy radio waves.

She told MailOnline: ‘These bubbles need powering sources, so they can be around bright single stars or around stellar clusters.’

Previous studies, which only radio and submillimeter wavelength data, had produced low-resolution images and did not show the bubble.

Among the most important measurements was a far-infrared wavelength emitted by a specific ion of carbon in the shell.

‘We can use spectroscopy to actually tell how fast this carbon is moving either towards or away from us,’ said Ramsey Karim, co-author of the study.

‘This technique uses the Doppler effect, the same effect that causes a train’s horn to change pitch as it passes you. In our case, the colour changes slightly depending on the velocity of the carbon ions.’

By determining whether the carbon ions were moving towards or away from Earth and combining the information with measurements from the rest of the electromagnetic spectrum allowed them to create the new images.

This shows the expanding stellar-wind bubble surrounding the star forming region Westerlund 2 – an obscured, young compact star cluster within the Milky Way that is about two million years old and difficult to image.

It has some of the hottest, brightest and most massive stars ever spotted by astronomers and is about 20,000 light years from Earth. 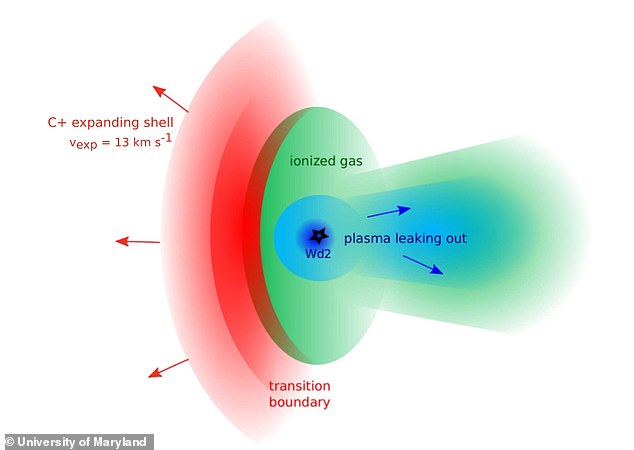 Using multi-wavelength astronomy, including far-infrared observations, they got a detailed understanding of these bubbles of warm gas that are made of ionised carbon, finding they help drive further star formation from the hot gas 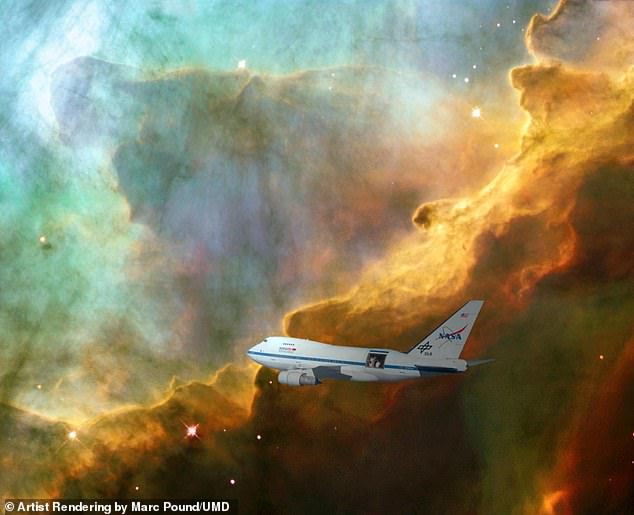 In addition to finding a single, stellar wind-driven bubble around Westerlund 2, they found evidence of new stars forming in the shell region of this bubble.

Their analysis also suggests that as the bubble expanded, it broke open on one side, releasing hot plasma and slowing expansion of the shell roughly a million years ago.

But then, about 200,000 or 300,000 years ago, another bright star in Westerlund 2 evolved, and its energy re-invigorated the expansion of the Westerlund 2 shell. 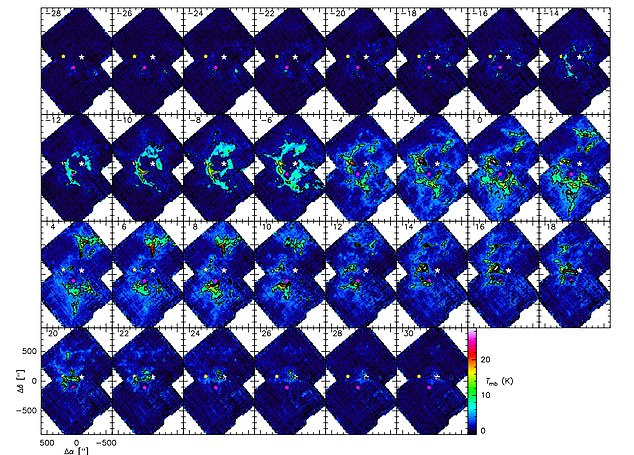 The second row of images show the expanding bubble.  The surfaces of these bubbles form a kind of outer shell around the bubbles, with new stars forming within the shells and overlapping and intermingling with clouds of surrounding gas – which has made it hard to distinguish bubbles in the past 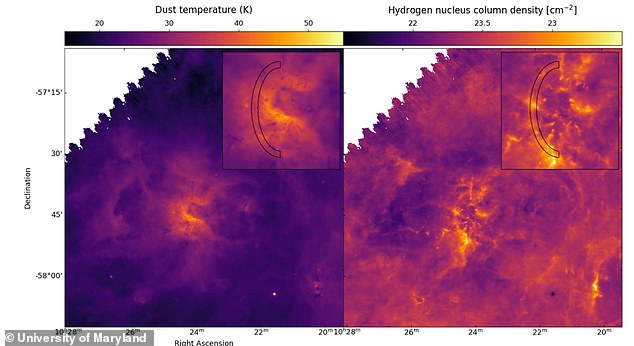 Map of temperatures (left) and column densities (right) derived pixel by pixel from the data.  The inset images in the upper right corners zoom in on the central region and show the half-ellipse mask used to estimate the shell mass from dust

‘We saw that the expansion of the bubble surrounding Westerlund 2 was reaccelerated by winds from another very massive star, and that started the process of expansion and star formation all over again,’ Tiwari said.

‘This suggests stars will continue to be born in this shell for a long time, but as this process goes on, the new stars will become less and less massive.’

Tiwari and her colleagues will now apply their method to other bright star clusters and warm gas bubbles to better understand these star-forming regions of the galaxy.

Their results were published in The Astrophysical Journal.

Westerlund 2 is a compact, young star cluster within the Milky Way and about 20,000 light years from the Earth.

It contains some of the hottest, brightest nd most massive stars known to astronomy and sits inside a stellar breeding ground called Gum 29.

This allowed astronomers to determine it is a very young star cluster, at about one to two million years old rather than billions of years old.

It was discovered by Bengt Westerlund in the 1960s and was hte subject of the Hubble 25th anniversary image on April 23, 2016.

Westerlund 1 is a compact super star cluster in the Milky Way over 3 million light years from the Earth, also discovered by Bengt Westerlund in the 1960s.

It is so large that in future it could evolve into a globular cluster and contains a large number of rare, evolved, high-mass stars including hypergiants.