A new method for studying how cells repair damaged DNA — which causes cancer — has been demonstrated by astronauts on board the International Space Station.

Used on yeast cells, the technique is based CRISPR/Cas9 genome editing technology, which is used to edit animal and plant DNA with great precision.

In tests on the orbiting laboratory, this tool was used to cause precise damage to strands of DNA in the yeast, as so the repair mechanisms could be seen in action.

The advantage of creating the DNA damage with CRISPR/Cas9 technology — instead of, say, radiation — lies in how such allows the repairs to be seen in better detail. 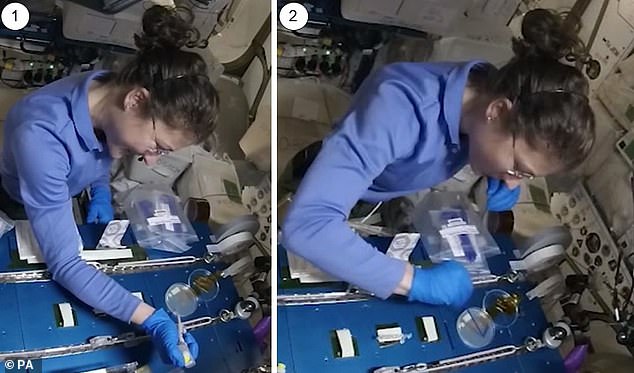 A new method for studying how cells repair damaged, DNA — which causes cancer — has been demonstrated by astronauts on board the International Space Station. Pictured: NASA astronaut Christina Kock performs the genome editing technique aboard the ISS

There are various processes that can harm an organism’s DNA — from accidents during normal biological processes or exposure to external factors like ultraviolet light or other types of radiation.

The study focussed on a particularly harmful type of damage called a ‘double-strand break’, in which both helices of that make up the backbone of DNA are separated.

If double-strand breaks are not repaired, cell death can result — but mis-repairs have the potential to lead to cancer.

Understanding the different mechanism that cells employ to repair DNA damage in different settings therefore has the potential to help us devise new ways to fight against cancer.

This could be particularly important outside of the Earth’s atmosphere— as astronauts are exposed to an increased risk of DNA damage thanks to the abundance of ionizing radiation in space.

Furthermore, previous research has suggested that the microgravity environment may affect how cells go about mending their DNA — raising the concern that repairs in space might not be as robust as those undertaken on the Earth.

The study marks the first time that CRISPR/Cas9 genome editing has been conducted in space, the researchers said — and also the first time in space that the DNA of live cells have been altered by genetic material from another organism.

‘But also that we were able to integrate them into a functionally complete biotechnology workflow applicable to the study of DNA repair and other fundamental cellular processes in microgravity.’

‘These developments fill this team with hope in humanity’s renewed quest to explore and inhabit the vast expanse of space.’ 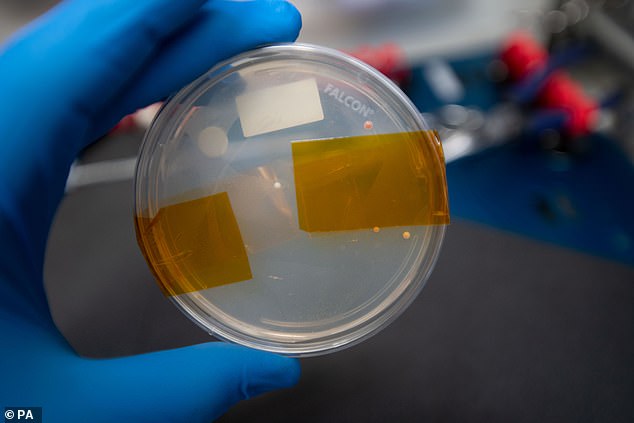 Used on yeast cells (pictured) in the recent tests, the technique is based CRISPR/Cas9 genome editing technology, which is used to edit animal and plant DNA with great precision 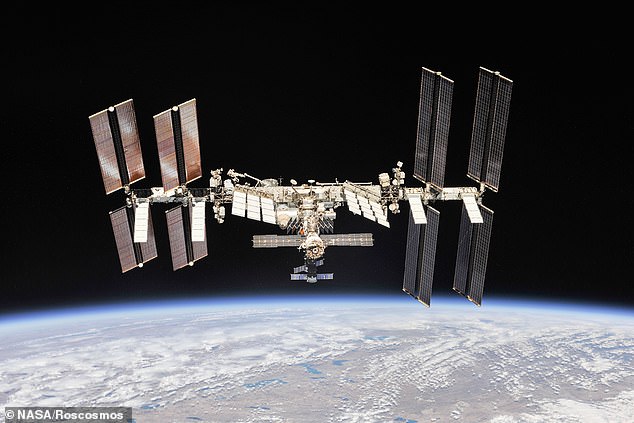 The study marks the first time that CRISPR/Cas9 genome editing has been conducted in space, the researchers said — and also the first time in space that the DNA of live cells have been altered by material from another organism. Pictured: the International Space Station

‘Being a part of “Genes in Space-6 has been a highlight of my career,’ said paper author and microbiologist Sarah Stahl Rommel of Houston’s JES Tech.

‘I saw first-hand just how much can be accomplished when the ideas of innovative students are supported by the best from academia, industry and NASA.’

‘The expertise of the team resulted in the ability to perform high-quality, complex science beyond the bounds of Earth.’

‘I hope this impactful collaboration continues to show students and senior researchers alike what is possible onboard our laboratory in space.’

With their initial study complete, the team said that future research could see their technique refined in order to better mimic the complex DNA damage that results from exposure to ionising radiations.

Furthermore, the approach could also be used as a foundation for various other studies related to the impact of long-term space exposure on living beings.

Crispr-Cas9 is a tool for making precise edits in DNA, discovered in bacteria.