Around 1.8MILLION Britons live in high-risk flood areas and 90,000 new-build homes will be built on these danger spots by 2025, report claims

More people than live in Manchester and Birmingham combined — around 1.8 million people — are at risk of flooding in the UK, a comprehensive report has revealed.

Torrential rain and overflowing rivers saw vast swathes of the Midlands and Yorkshire devastated by flooding at the end of 2019.

It took the total amount of properties hit by flooding in the last 12 years to almost 100,000.

Worryingly, the report from The Climate Coalition also states around 90,000 homes are projected to be built in high flood risk areas over the next five years.

The report found climate change was a driving force behind the increasing flood threat in the UK. 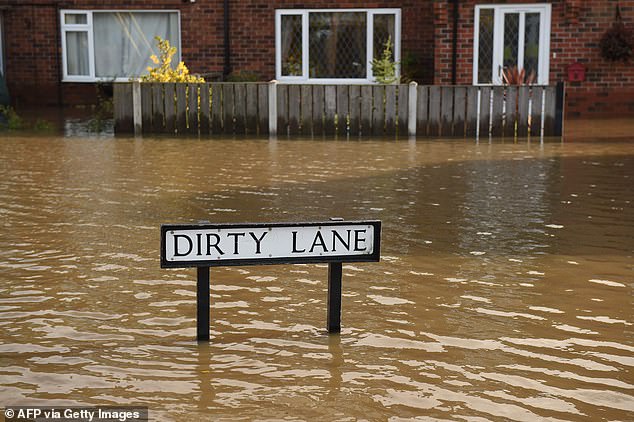 Pictured, flood-water in a street in the village of Fishlake near Doncaster, northern England, on November 11, 2019 following heavy rain and the River Don bursting its banks

In two recent studies, researchers found the likelihood of extreme rainfall happening in the UK had increased by approximately 40 per cent because of climate change.

‘The rush to build is leading to ridiculous short-termism like building on flood risk land,’ said Paula Higgins, chief executive of the HomeOwners Alliance.

‘If you are looking to live in a home for 20 to 30 years you should know it is safe from climate risk.’

But in reality, a huge amount of homes in the UK are directly affected by flooding and climate change continues to threaten more.

In November 2019, a month’s worth of rain fell in a single day in some parts of South Yorkshire and badly affected around 1,800 homes and businesses.

In October, parts of Yorkshire, Lincolnshire, Norfolk and the East Midlands registered in excess of 170 per cent of their average monthly rainfall in October.

The Climate Coalition is also calling on the UK Government to take measures to achieve its net zero target as soon as possible.

Dr Neil Jennings from the Grantham Institute – Climate Change and the Environment at Imperial College London says: ‘There are so many benefits that will come if we get the living and home bit right.

‘People will associate climate action with something that brings them homes they can afford to heat and not ones that make them ill.’

Despite this, many people do not have adequate insurance to protect themselves from flooding.

Association of British Insurers (ABI) says it received more than 2,250 claims from flooded properties and the average pay out is likely to be in excess of £30,000.

The Climate Coalition, which includes well known charities such as WWF, RSPB and the National Trust, published the report and is urging the government to strengthen flood defences.

Environment Minister Rebecca Pow said: ‘Adapting to the inevitable changes in our climate is vital, and we are taking robust action to improve the resilience of our people, economy and environment, including by investing £2.6 billion over six years to better protect our communities from flooding and erosion.

‘Tackling climate change and the impact on our environment is both a national and international priority. 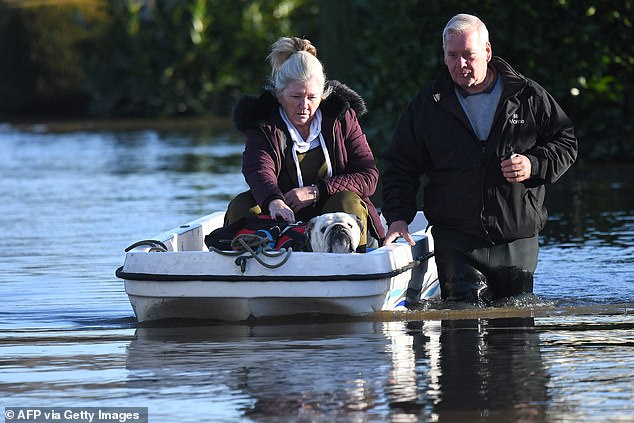 Reggie the dog is rescued with a boat from flooding at the Little Venice Country Park and Marina in Maidstone, southeast of London, on December 23, 2019 after flooding following heavy rain

‘The UK is already leading the way by delivering on our world-leading target of net zero greenhouse gas emissions by 2050.

‘We will ask our partners to match the UK’s ambition at this year’s COP26 talks in Glasgow.’

The report, titled Home Truths shines a light on exactly how climate change is impacting properties in the UK.

Gareth Redmond-King, Head of Climate Change at WWF-UK, said: ‘As time ticks past, so the impacts of the climate crisis edge ever closer to home – including right up to, and into our homes, as this report sets out so starkly.

‘We must move faster to slash emissions from our homes, to protect them from the impact of the climate emergency – including the devastating floods we saw last year.’

WHAT WOULD SEA LEVEL RISES MEAN FOR COASTAL CITIES?