The so-called Havering Hoard is the single biggest collection of Bronze Age trinkets ever found in the UK capital. The Hoard contains a wide array of axeheads, daggers, jewellery and tools indicative of a culture with strong ties to Europe’s mainland.

Kate Sumnall, Curator of Archaeology at the Museum of London, told Express.co.uk the discovery points towards a Bronze Age community that did not isolate itself on the British Isles.

Instead, some of the items in the Havering Hoard appear to have been forged from metal ingots traced back to the modern-day French-German border.

Ms Sumnall said: “The settlement at Havering was not an isolated community, it was part of a much larger culture that spanned across the western coastal regions of Europe.

“It was well connected and the proximity to the river would have been valued for a number of different reasons. 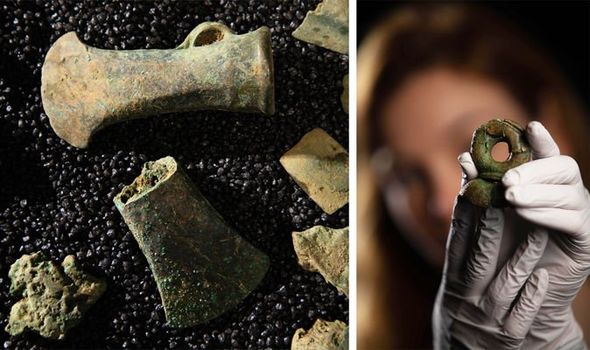 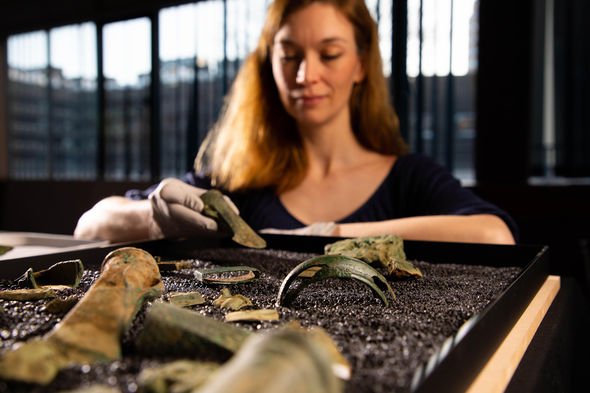 “The river provided a means of efficient and relatively safe travel facilitating that movement of raw materials, finished goods, people and even ideas.”

The Havering Hoard was buried towards the end of the Bronze Age and is dated between the years c.900 and c.800.

The collection totals 453 objects that were uncovered by archaeologists from Archaeological Solutions during a planned excavation.

Ms Sumnall said: “The Havering Hoard is a very important discovery due to the size, the fact that it was buried in four parts but most of all because the entire site was excavated.

“This was a planned excavation taking part ahead of mineral extraction on-site and so there is that wealth of data about the wider landscape that helps to interpret the Hoard.”

The Havering Hoard has allowed archaeologists to better understand the daily lives of the people who once settled modern-day London.

The settlement at Havering was not an isolated community

Ms Sumnall said: “The contents of the Hoard give a valuable insight into the personal possessions of a Bronze Age community.

“There are the tools which give clues about how they made their roundhouses, boats, fences etc., there are the weapons which indicates competition over status and resources, and there are the raw materials and exotic items which show the extent of the trade and exchange networks.

“Then there is the practice of hoarding itself, the motivation behind the creation and burial of the Hoard, does this reveal something of their beliefs?”

DON’T MISS
Coronavirus: The one thing that help prevent infections revealed [INSIGHT]
Watch as Starlink satellite streams through night at astronomers dismay [VIDEO]
When should the UK isolate from coronavirus? [ANALYSIS] 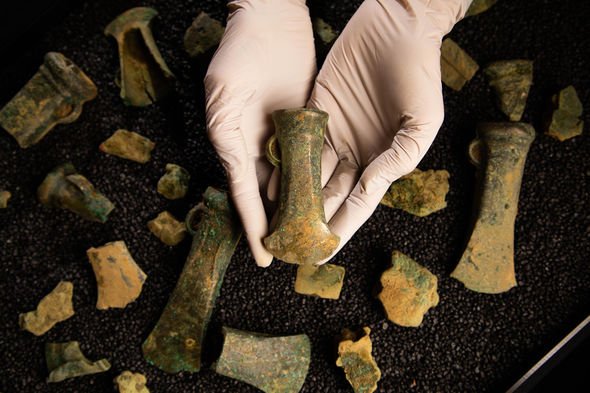 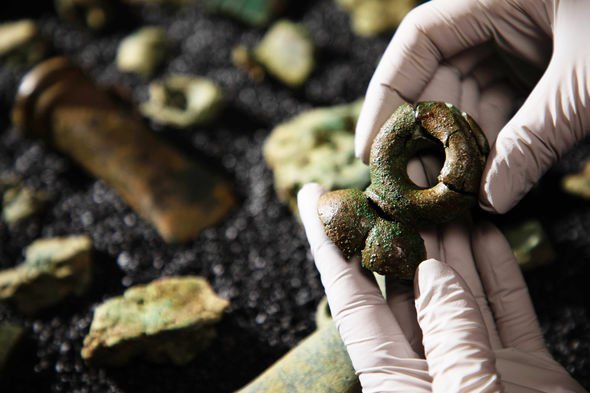 And there are likely more discoveries to be made along the way.

As the city of London grows, Ms Sumnall said archaeologists are bound to unearth new discoveries hidden in the ground.

She said: “In recent years, planning laws have been put in place that state all archaeology must be explored and recorded prior to development.

“All of this means that we have a large body of evidence that builds a picture about the people that lived and worked in the London area during the Bronze Age, more so than other parts of the country which may not have seen so much development.

“There have been significant other Bronze Age discoveries across the country which help to place London within the wider Bronze Age context, for example, those at Must Farm in the Cambridgeshire fens. “

Starting April 3, the Havering Hoard will be on display at the Museum of London Docklands, Isle of Dogs, London.

The free exhibition will be open to the public until November 1, 2020.

The museum is located at West India Quay in east London, in a converted Georgian sugar warehouse.