Severe weather forecasts in Japan have led to a further delay in the launch of the first Arab mission to Mars, with the Hope probe not launching until next week.

The probe, named Al-Amal, was designed and built by the United Arab Emirates over the past six years to stimulate the science sector in the Arab state.

It was due to leave from the Tanegashima Space Center in Japan at 21:51 BST on July 14 but has since been delayed twice due to ‘unstable weather conditions’.

A spokesperson for the Emirates Space Agency hasn’t confirmed a specific new launch date but said it should leave between July 20 and July 22.

The mission has to launch by the middle of August, as after that date Mars and Earth will no longer be in alignment and the next opportunity will be in 2024. 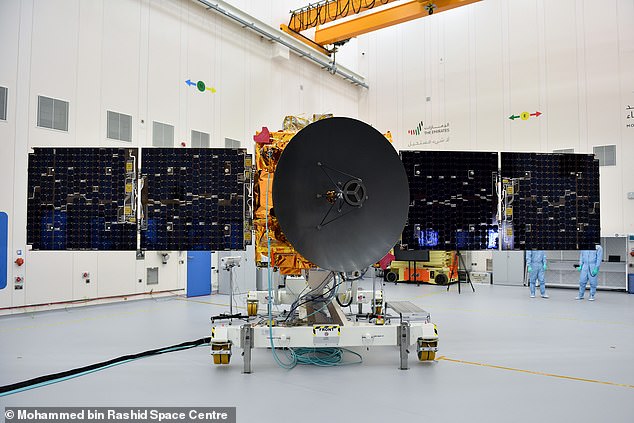 The probe is being launched from Japan using a Mitsubishi Heavy Industries H-IIA launcher from Tanegashima Island.

The delay was due to ‘continued thunderstorms, clouds and unstable weather conditions in the coming days on Tanegashima Island’, a spokesperson said.

‘The launch is now scheduled to take place between the 20th and 22nd July 2020, depending on improved weather.’

This isn’t the only Mars mission that has faced delays. NASAs Mars 2020 mission was due to launch on July 17 but now won’t leave until July 30 at the earliest.

This is the first Arab mission to the Red Planet and has involved them working with a range of universities and organisations to train UAE students and specialists.

The 2,970lb probe was built entirely within the Emirates and will take seven months to reach the Red Planet.

When it gets there it will stay in orbit for a whole Martian year – 687 days.

Three instruments mounted on the probe will provide a picture of Mars’s atmosphere throughout the year and all of the data gathered will be made widely available.

Also known as the Hope probe, the mission is one of three launching for the Red Planet this year – the others are from NASA and the Chinese space agency.

The US and Chinese missions will see a rover land on the planet in a bid to search for signs of ancient or present Martian life and the UAE probe will study the atmosphere. 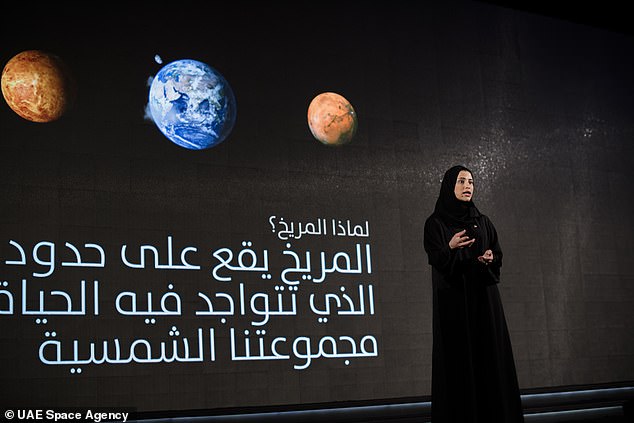 Sarah Amiri, deputy project manager of the United Arab Emirates (UAE) Mars Mission talking about the voyage due to launch no earlier than July 20

The Hope probe has been developed almost entirely in-house by scientists in the UAE, with learning and partnership support from various international institutions.

There are a number of instruments on the spacecraft that will give scientists a clearer picture of the Martian atmosphere and even how it lost most of its air.

This includes an infrared spectrometer to measure the lower atmosphere and temperature, a high-resolution imager to study the ozone and another to look at levels of hydrogen and oxygen up to 27,000 miles from the surface.

Understanding the atmospheres of other planets will allow for a better understanding of the Earth’s climate, UAE Space Agency officials say. 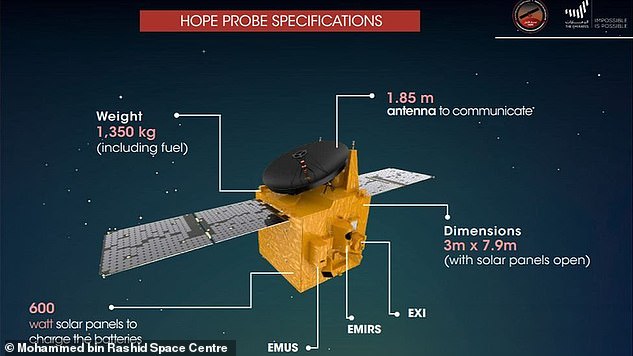 Most Mars missions assess the geology of the planet, to try and understand its history and what made the world so barren, but this mission is different.

Sensors which will help reveal the secrets of Mars’s climate

One will be a high-resolution camera dedicated to tracking dust movements and the ozone of Mars.

This will scan a range of light frequencies.

Another device will specifically focus on infrared and was built by scientists at Arizona State University.

This IR camera will measure both the upper and lower atmosphere.

The third sensor will be an ultraviolet spectrometer for measuring oxygen and hydrogen levels.

He said this has happened to the point where it can no longer have water, one of the major building blocks of life, and understanding that could help the Earth.

‘For instance, if there is a major dust storm on Mars does that increase the rates of escape of hydrogen and oxygen?’

Officials hope that this mission, and ones that will follow, will open up opportunities for the youth of the UAE and cement its place as a globally influential country.

There are currently only eight active Mars missions, and the UAE is hoping to join this exclusive club.

NASA is sending its Mars 2020 mission to the Red Planet either later this month or early next month after a number of setbacks delayed the original launch.

The mission, which includes the Perseverance rover, was due to leave for the Red Planet on July 17 but a number of issues meant this was delayed until ‘no earlier than July 30’.

However, due to the need to launch within a specific window, Mars 2020 has to launch no later than August 15 or it won’t reach Mars, as it will no longer be in alignment with the Earth.

Last week NASA packed up Perseverance and the other elements of the Mars 2020 mission into the nose cone that will get it out of Earth’s atmosphere.

It is launching on top of a United Launch Alliance Atlas V booster from Cape Canaveral Air Force Station in  Florida in the coming weeks.

No matter what day Perseverance lifts off during its July 30 to August 15 launch period, it will land in Mars’ Jezero Crater on February 18, 2021, according to officials.

NASA says that by targeting landing for one specific date and time helps mission planners better understand lighting and temperature at the landing site.

It also helps the location of Mars-orbiting satellites tasked with recording and relaying spacecraft data during its descent and landing.

‘I have seen my fair share of spacecraft being lifted onto rockets,’ said John McNamee, project manager for the Mars 2020 Perseverance rover mission.

‘But this one is special because there are so many people who contributed to this moment. To each one of them I want to say, we got here together, and we’ll make it to Mars the same way.’ 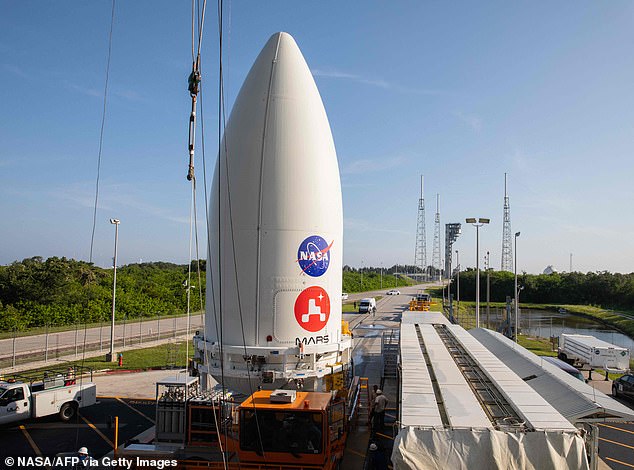 NASA is sending its Mars 2020 mission to the Red Planet either later this month or early next month after a number of setbacks delayed the original launch. It has been loaded into the nose cone of the Atlas V rocket 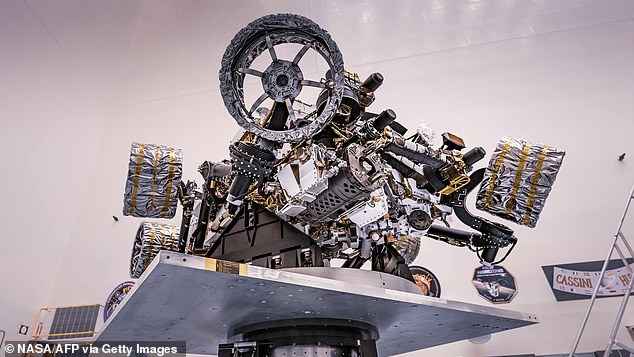 The mission, which includes the Perseverance rover, was due to leave for the Red Planet on July 17 but a number of issues meant this was eventually delayed to ‘no earlier than July 30 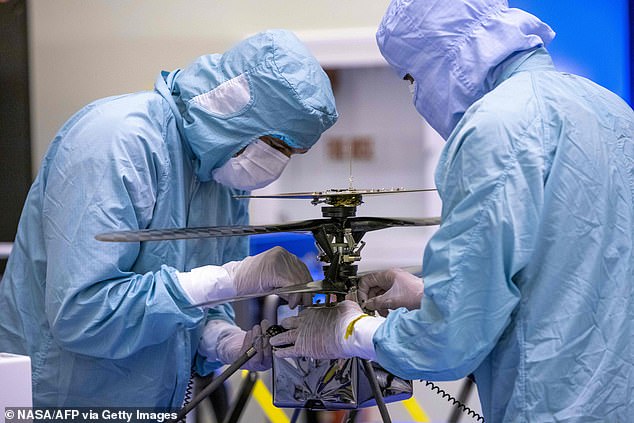 No matter what day Perseverance lifts off during its July 30 to August 15 launch period, it will land in Mars’ Jezero Crater on February 18, 2021, according to officials 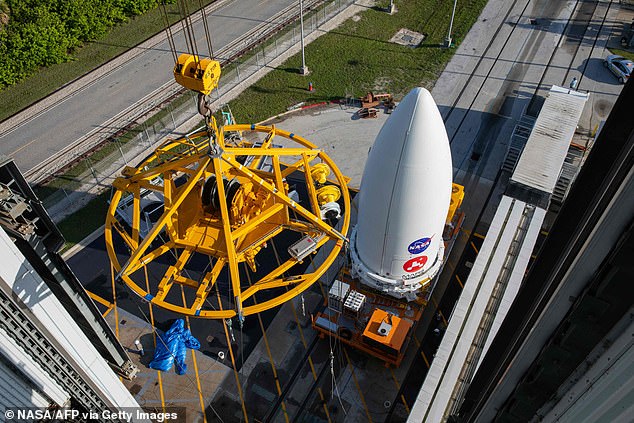 Like the Chinese mission, which is also due to launch this month for the Red Planet, Mars 2020 is tasked with studying the planet’s geology and look for signs of life.

China’s mission to Mars, named Tianwen-1 (Questions to Heaven), will launch between July 20 and July 25 from Hainan.

The probe will reach Mars around the same time as the NASA and UAE missions – February 2021 and will first enter Martian orbit before deploying a small rover.

China made global headlines when it succeeded in landing a rover on the far side of the moon last year and says that was a ‘practice mission’ for Mars.

The UAE has also had some space success before, having launched four earth observation satellites and sent its own astronaut, Hazzaa al-Mansoori, to the ISS. 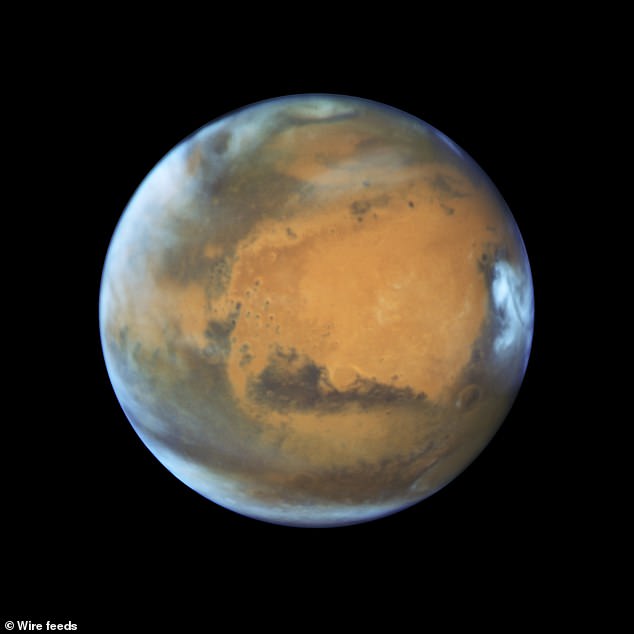 For the mission to Mars the UAE said they wanted to make their data open and accessible in real time to the global scientific community.

‘What is unique about this mission is that for the first time the scientific community around the world will have an holistic view of the Martian atmosphere at different times of the day at different seasons,’ the mission’s project manager Omran Sharaf.

‘We have a strategy to contribute to the global effort in developing technologies and science work that will help one day if humanity decides to put a human on Mars.’

The next opportunity to send missions to the Red Planet will be in 2024 when the European Space Agency will launch the Rosalind Franklin Rover as part of their ExoMars mission to search for signs of life.

The ESA mission was due to launch this year but had to be postponed due to coronavirus lockdown measures in Europe making final tests difficult.

Mars has become the next giant leap for mankind’s exploration of space.

But before humans get to the red planet, astronauts will take a series of small steps by returning to the moon for a year-long mission.

Details of a the mission in lunar orbit have been unveiled as part of a timeline of events leading to missions to Mars in the 2030s.

Nasa has outlined its four stage plan (pictured) which it hopes will one day allow humans to visit Mars at he Humans to Mars Summit held in Washington DC yesterday. This will entail multiple missions to the moon over coming decades

In May 2017, Greg Williams, deputy associate administrator for policy and plans at Nasa, outlined the space agency’s four stage plan that it hopes will one day allow humans to visit Mars, as well as its expected time-frame.

Phase one and two will involve multiple trips to lunar space, to allow for construction of a habitat which will provide a staging area for the journey.

The last piece of delivered hardware would be the actual Deep Space Transport vehicle that would later be used to carry a crew to Mars.

And a year-long simulation of life on Mars will be conducted in 2027.

Phase three and and four will begin after 2030 and will involve sustained crew expeditions to the Martian system and surface of Mars.