Stargazers have some real treats to look forward to this weekend, including the second new moon of the month and a spectacular celestial ‘kiss’.

A new moon is when our natural satellite has 0 per cent illumination, so it the lunar disk is invisible to the unaided eye.

It will coincide with a partial solar eclipse, viewable for people in Antarctica and parts of South America, according to NASA.

This is when, as the moon passes between the Earth and the sun, it casts a shadow on parts of Earth.

The partial solar eclipse won’t be visible from the UK or the US, although it can be watched through an online live-stream.

Also on Saturday, Venus and Jupiter – the two brightest planets in the sky – will get so close that they’ll appear to nearly collide, or look as if they’re ‘kissing’. 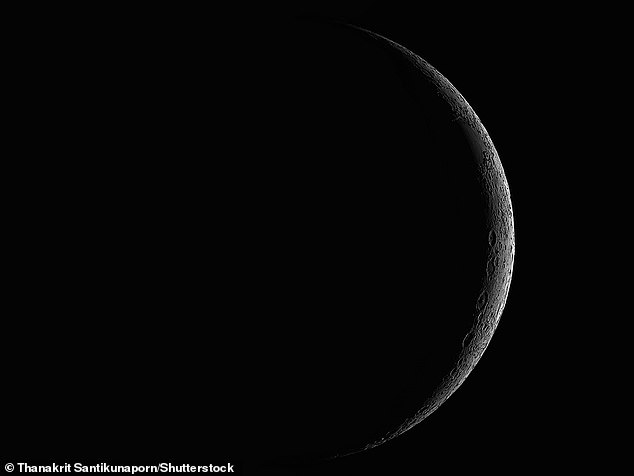 A new moon is when our natural satellite has 0 per cent illumination, so it the lunar disk is invisible to the unaided eye (file photo)

As NASA explains, a solar eclipse happens when the moon moves between the sun and Earth, casting a shadow on Earth, fully or partially blocking the Sun’s light in some areas.

During a partial eclipse, the moon and sun are not perfectly aligned, so the moon does not completely cover the sun.

‘On Saturday, April 30, 2022, people in parts of southern South America, Antarctica, and the Pacific and Southern Oceans will have a chance to witness a partial eclipse of the sun just before and during sunset,’ NASA says.

‘As it sets in the west on the evening of April 30, the sun will appear partially eclipsed for those with clear skies in Chile, Argentina, most of Uruguay, western Paraguay, southwestern Bolivia, southeastern Peru, and a small area of southwestern Brazil.

Both a new moon and a solar eclipse occur when the moon is between Earth and the sun – but there is an important difference between the two events.

A new moon happens once during the moon’s lunar cycle and can happen without a solar eclipse happening.

‘The eclipse will also be visible along parts of the northwestern coastline of Antarctica, in the Atlantic Ocean just off the southeastern coast of South America, including the Falkland Islands, and in much of the South Pacific Ocean and Southern Ocean.’

Although the partial solar eclipse will just be visible in parts of the southern hemisphere, the moon’s phases are fixed, meaning the moon will disappear (it will become a new moon) for people around the world.

The waxing moon is increasingly brighter as it progresses toward a full moon, and generally rises in the late afternoon or early evening, placing it high in the sky during the evening after sunset.

Saturday marks a ‘black moon’ – which is not strictly speaking an officially accepted astronomical term and has many meanings.

In terms of Saturday’s event, black moon refers to the second new moon that appears in a month. This can happen because the lunar cycle (29.5 days) is shorter than months of the year.

The first new moon of April happened on the first day of the month.

Images show the new moon, waxing moon, full moon and waning moon as they look during the 29.5-day lunar cycle

WHAT IS A BLACK MOON?

Although not an accepted astronomical term, ‘black moon’ refers to a second new moon that appears in a month.

It can also refer to the absence of a new moon in a month, or the third new moon in an astronomical season with four new moons.

A third new moon in a season of four new moons is a fairly rare event; it occurs around every 33 months – roughly every two and a half years.

The term ‘black moon’ contrasts with ‘blue moon,’ which is the second full moon in a calendar month.

Lastly, the two brightest planets in the sky, Venus and Jupiter, are also set for their own ultra-close conjunction at the end of the month, on April 30.

Venus and Jupiter will get so close that they’ll appear to nearly collide, or look as if they’re ‘kissing’, according to one expert.

‘Venus and Jupiter have been moving closer together over the past several weeks, so this romantic spark between them has been brewing for some time,’ said astrophysicist Dr Brad Tucker at the Australian National University (ANU).

‘Although Venus and Jupiter get close to one another every few years, this time there is also Mars and Saturn in the mix which is pretty rare, watching from afar like the creepy neighbour next door.’

Already this month, four planets – Saturn, Mars, Venus and Jupiter – have been gradually becoming more and more aligned in the pre-dawn sky, forming something of a neat line.

Members of the public don’t need a telescope to view the planets, which will be best viewed in clear skies free of cloud.

In a sky full of stars, the planets can be identified by their distinct lack of twinkling. Stars twinkle, while planets usually shine steadily.

Looking out the eastern sky during the early hours of the morning it will be possible to see Jupiter, Venus, Mars, Saturn and the Moon

Telling the planets apart with the naked eye is relatively simple to do, according to Jake Foster, an astronomy education officer at Royal Museums Greenwich.

HOW TO SPOT THE PLANETS

The planets will look like bright stars, except they don’t ‘twinkle’. Stars twinkle, while planets usually shine steadily.

The planets are also different colours – Mercury is white-ish while Venus is bright white.

Mars can be recognised by its distinctive rusty red colour.

Jupiter is a light tan colour and Saturn is a yellow-ish tan colour.

‘Venus will be noticeably the brightest of all four planets, shining a bright white light,’ he told MailOnline.

‘Jupiter will be the second brightest, also shining white in colour. Saturn will be clearly fainter than the other three, due to its much further distance from the Sun.

‘Mars will have the most distinctive difference from the others because of its colouration, appearing as a bright orange point of light to the naked eye.’

Although they appear close as viewed from Earth, the planets are of course still millions of miles apart during an alignment.

They only appear to move closer, or farther apart, in the sky as our view of them across the solar system changes from month to month.

‘Alignment is therefore an artefact of a viewpoint and not something fundamental about the planets themselves,’ said Dr Christopher S. Baird, assistant professor of physics at West Texas A&M University.

Dr Baird also said that planets in our solar system never line up in one perfectly straight line ‘like they show in the movies’.

‘If you look at a two-dimensional plot of the planets and their orbits on a piece of paper you may be lead to believe that all the planets will circle around to the same line eventually.

‘In reality, the planets do not all orbit perfectly in the same plane. Instead, they swing about on different orbits in three dimensional space. For this reason, they will never be perfectly aligned.’

Planets in our solar system never line up in one perfectly straight line ‘like they show in the movies’. Very rarely, they appear

An even more impressive alignment – dubbed the ‘most spectacular of the year’ – is set to take place in a couple of months.

On June 24, all the other planets in our solar system – Mercury, Venus, Mars, Jupiter, Saturn, Uranus and Neptune – will align the same region of pre-dawn sky.

While Mercury, Venus, Mars, Jupiter and Saturn will be visible to the naked eye in good conditions, a telescope might be needed to discern Neptune and Uranus, according to Vito Technology, developer of the Star Walk app.

DOES PLANETARY ALIGNMENT HAVE AN EFFECT ON EARTH?

The planets in our solar system never line up in one perfectly straight line like they show in the movies.

If you look at a two-dimensional plot of the planets and their orbits on a piece of paper you may be lead to believe that all the planets will circle around to the same line eventually.

In reality, the planets do not all orbit perfectly in the same plane. Instead, they swing about on different orbits in three dimensional space. For this reason, they will never be perfectly aligned.

Alignment is therefore an artifact of a viewpoint and not something fundamental about the planets themselves.

Even if the planets did all align in a perfectly straight line, it would have negligible effects on Earth.

Fictional and pseudo-science authors like to claim that a planetary alignment would mean that all of the gravitational fields of the planets add together to make something massive that interferes with life on Earth.

In truth, the gravitational pulls of the planets on the Earthare so weak that they have no significant effect on Earth life.

There are only two solar system objects with enough gravity to significantly affect Earth: the moon and the sun.

The moon’s gravity is primarily responsible for the daily ocean tides. The near alignment of the sun and the moon does have an effect on the Earth, because their gravitational fields are so strong.

This partial alignment occurs every full moon and new moon, and it leads to extra strong tides called ‘spring tides’.

The word ‘spring’ here refers to the fact that the water seems to leap up the shore with the extra strong tides every two weeks – not that they occur only in the spring season.