While face masks were once rare sightings, they’re now compulsory in a range of settings across the UK.

The face coverings play a key role in stopping the spread of Covid-19, yet many iPhone users have been frustrated that their masks have prevented them from unlocking their iPhones using Apple’s facial recognition technology, Face ID.

Now, a report indicates that Apple could be bringing back its Touch ID technology in its 2021 iPhone, in the form of an in-screen fingerprint reader, to help users unlock their smartphones without having to remove their masks.

Rather than being a replacement for Face ID, Touch ID would be an additional method of unlocking the iPhone, according to the report. 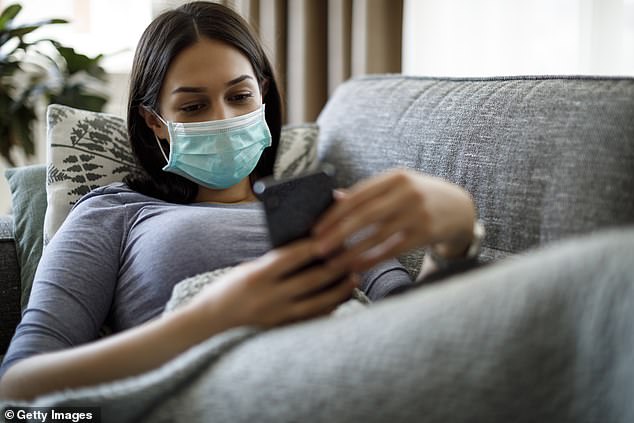 Many iPhone users have been frustrated that their masks have prevented them from unlocking their iPhone using Apple’s facial recognition technology, Face ID (stock image)

The report, by Bloomberg, indicates that changes to this year’s iPhone will be minor.

It said: ‘Apple isn’t planning major changes for this year’s iPhone line given the enhancements made to the smartphone in 2020, including 5G and new designs, according to people familiar with the situation.

‘Inside Apple, engineers consider the next iPhones another ‘S’ version of the device, the nomenclature typically given to new iPhones with minor upgrades.’

However, one of the biggest changes is expected to be the addition of an in-screen fingerprint reader, which would be offered alongside the current Face ID and passcode options.

‘Apple is still testing a key upgrade for 2021: an in-screen fingerprint reader,’ the report explains.

‘This would add a new method for users to unlock their iPhone, going beyond a passcode and Face ID facial recognition.’

Apple first introduced Touch ID in 2013, in the form of a fingerprint reader integrated into the iPhone’s home button.

However, Apple started to move away from this technology in 2017, with the introduction of Face ID in the iPhone X.

According to Bloomberg, instead of reintroducing a Home button, the Touch ID technology would be embedded within the new iPhone screen. 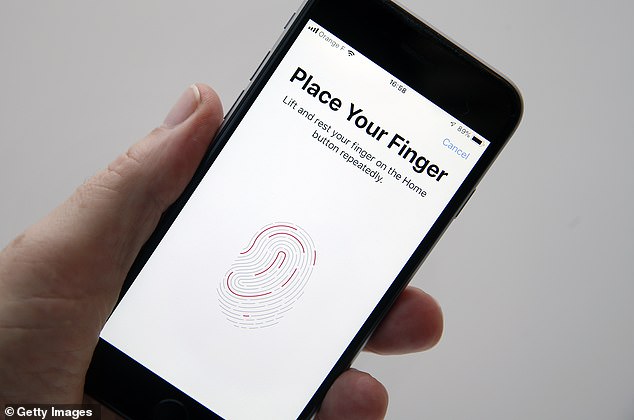 According to Bloomberg, instead of reintroducing a Home button, the Touch ID technology would be embedded within the new iPhone screen

This could be particularly useful for iPhone users during the Covid-19 pandemic.

‘The feature would be convenient in an environment where users wear masks, which are often incompatible with facial recognition,’ Bloomberg said.

‘An in-screen fingerprint reader, which has also been featured on Android phones for several years, could also be quicker than Face ID for some users.

Face coverings play a key role in stopping the spread of Covid-19, yet many iPhone users have been frustrated that their masks have prevented them from unlocking their iPhone using Apple’s facial recognition technology, Face ID

Several frustrated iPhone users have taken to Twitter over the last few months, complaining of being unable to unlock their smartphone with their face mask on

One iPhone user joked: ‘Think I just scared my phone with my face mask. Face ID was like who tf are you?!’

Apple has not commented on the rumours, and is yet to announce a launch data or any details for its 2021 iPhone.

If an in-screen fingerprint sensor was included in the next iPhone, it would put the smartphone in direct competition with several Android models with the same technology.

Several frustrated iPhone users have taken to Twitter over the last few months, complaining of being unable to unlock their smartphone with their face mask on.

One user wrote: ‘It’s annoying that I have to remove my face mask to use my Face ID.’ 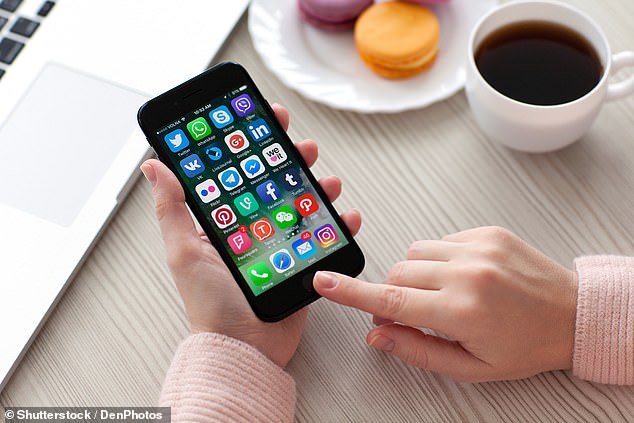 Apple first introduced Touch ID in 2013, in the form of a fingerprint reader within the iPhone’s home button

Another added: ‘Having to slide down the face mask for Face ID to work is quite inconvenient.’

And one joked: ‘Think I just scared my phone with my face mask. Face ID was like who tf are you?!’

However, back in April, researchers at Tencent Security’s Xianwu Lab cracked the code on training the iPhone to recognise users while wearing a mask.

They say to use a brand-new mask, fold it in half and hook the one side around your ear so it lays flat on your face.

Hold the mask in the lower middle position with your hand, pull it to the semi-masked state without any creases.

While half of your face is covered, pull up Face ID on your iPhone and follow the prompts.

However, the team found that not all masks will work with the trick – it seems that those made of soft material are recognisable.

Face masks must be worn on public transport and in many indoor spaces, including shops, shopping centres, indoor transport hubs, museums, galleries, cinemas and public libraries.

If necessary, the police and Transport for London (TfL) officers have enforcement powers including issuing fines of £200 (halving to £100 if paid within 14 days).

It comes after the World Health Organisation and numerous studies suggested they are beneficial.

As announced, the Government will bring forward changes to mean that for repeat offenders these fines would double at each offence up to a maximum value of £6,400.

The Prime Minister has also announced tougher enforcement measures, with businesses facing fines or closure for failing to comply with coronavirus rules, meaning there will be consequences for pubs that try to serve you at the bar.

National Police Chiefs’ Council chairman Martin Hewitt said: ‘Individuals, businesses and households all have a responsibility to ensure the virus is suppressed and police will play their part in supporting the public to navigate the measures in place for our safety.

‘Our approach of engaging with people and explaining the regulations in place will remain. The vast majority of situations are resolved following those two stages, with little need for further encouragement or enforcement action to be taken,’ he said.

‘Police will continue to work with their communities and only issue fines as a last resort.

‘Chiefs will be stepping up patrols in high-risk areas and will proactively work with businesses, licensing authorities and local authorities to ensure the rules are being followed.

‘If members of the public are concerned that the law is being broken or they are experiencing anti-social behaviour, they can report this to the police, who will consider the most appropriate response and will target the most problematic behaviour.’