Apple tree saplings grown from seeds of Isaac Newton’s famed tree have returned to the physicist’s home at Woolsthorpe Manor in Lincolnshire.

They spent six months in space on-board the ISS with British astronaut Tim Peake who has planted the saplings in the iconic scientist’s garden.

The seeds returned to Earth in 2016 to be nurtured into young trees and some have now been planted by the British astronaut at the home of Sir Issac. 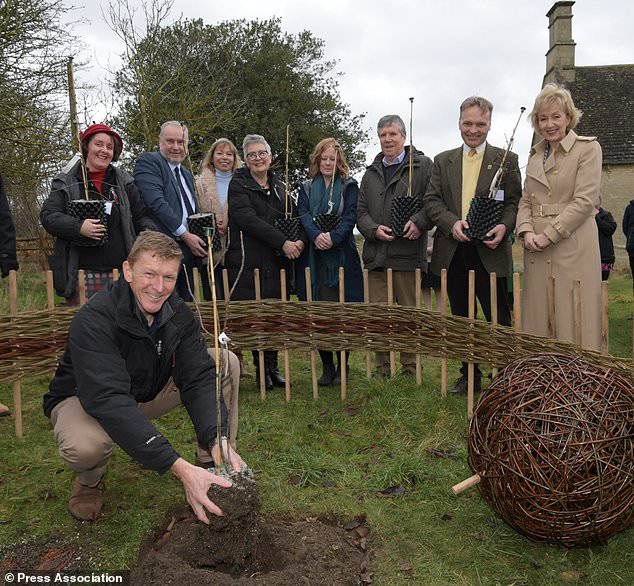 Pictrured: Tim Peake plants trees grown from apple seeds taken to space at the home of Isaac Newton after taking the seeds to the ISS in 2015

The seeds were taken aboard the International Space Station in 2015 by Major Tim Peake as part of the Pips in Space project.

Kew Gardens nurtured the seeds to maturity until they were ready for a permanent home.

‘My mission to space was named Principia in homage to Newton’s defining work that included his world-changing ideas about gravity,’ Major Peake said.

‘I wanted my Principia mission to inspire others, particularly young people, with the adventure of space and the excitement of science.

‘Now, thanks to the careful nurturing at Kew, the apple pips that flew with me into space have grown into fine young trees which I hope will continue to inspire potential Isaac Newtons.’

Other winning locations include the Eden Project in Cornwall, Jodrell Bank Discovery Centre in Cheshire, and the Royal Parks and National Physical Laboratory in Middlesex.

The Brogdale Collections in Kent, the Catalyst Science Discovery Centre in Cheshire, South Derbyshire District Council and the United Nations Office for Outer Space Affairs in Vienna also made the cut.

Business Secretary Andrea Leadsom said: ‘Tim Peake’s first trip to space became a source of national pride and inspired people across the country, including millions of schoolchildren who were amazed at the wonders of space science and achievements.

‘This mission also contributed to the continued success of our space industry which is a vibrant and successful part of our economy.

‘It is my own personal ambition to ensure the sector has a bright future, with investments that lead to huge improvements in our everyday lives – from tackling climate change to communicating around the world.’