Apple is investing in the construction of two of the world’s largest onshore wind turbines, as part of its effort to become ‘100 per cent carbon neutral’ by 2030.

The 650-foot turbines, located near the Danish town of Esbjerg, are expected to produce 62 gigawatt hours each year — enough to power almost 20,000 homes.

The electricity produced at Esbjerg will be used to power Apple’s 500,000-square-foot data center in Viborg, with all surplus energy going into the Danish grid.

It will also act as a test site for powerful offshore wind turbines, the company said.

Apple did not say how much it was investing in the project, which is being developed in partnership with European Energy. 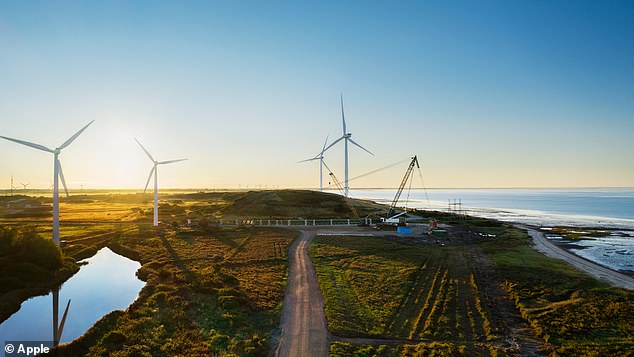 ‘This is an area where we have to lead — for the sake of our planet and future generations.’

Knud Erik Andersen, CEO of European Energy, said: ‘We are very pleased to work with Apple and look forward to delivering renewable energy to their Danish data center and support the development of green data infrastructure of the future.’ 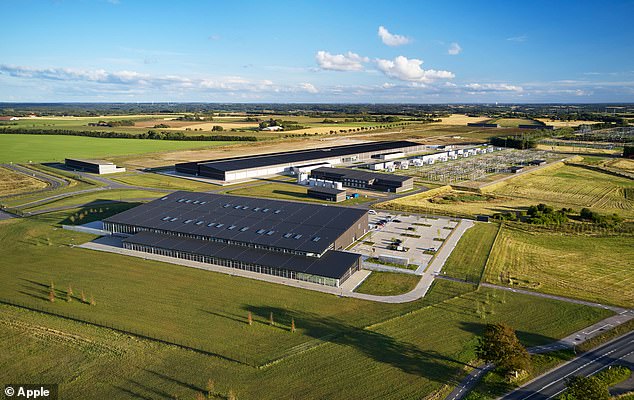 Like all of Apple’s data centers, the company’s Viborg data center is running on 100 percent renewable energy 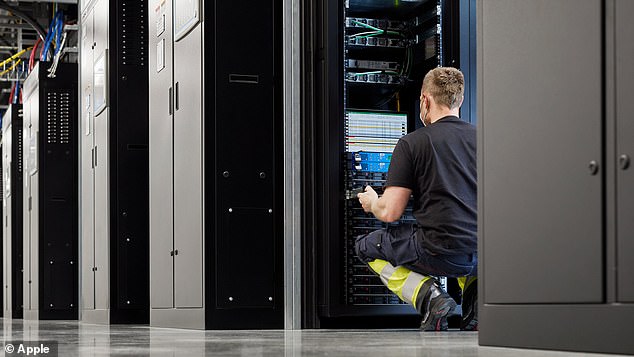 WHAT IS CARBON NEUTRALITY?

Carbon neutrality means having a balance between emitting carbon and absorbing carbon from the atmosphere.

However, this is difficult for big companies like Apple to do, meaning they plug their efforts into the fact they offset their emissions with green projects.

Removing carbon dioxide from the atmosphere and then storing it is known as carbon sequestration.

In order to achieve net zero emissions, all worldwide greenhouse gas emissions will have to be counterbalanced by carbon sequestration.

Renewable sources of energy like solar and wind have low carbon footprints.

Big tech companies such as Apple are feeling the pressure to curb their carbon footprint, to avoid potentially catastrophic effects of global warming by the end of this century.

The company consumes huge amounts of energy manufacturing products such as its iPhones, iPads and Mac computers, as well as powering its offices, data centres, and retail stores.

It also mines the Earth for rare earth elements to make components in its iPhones and other devices, which can damage the environment and result in toxic chemicals leaching into the groundwater.

However, Apple is working to reduce its reliance on mining by using materials from recycled sources. For example, the iPhone 11’s Taptic engine, which enables it to emit subtle vibrations, is made from 100 per cent recycled rare earth elements.

While Apple’s operations are already powered by 100 percent renewable energy and carbon neutral, this new commitment will mean that by 2030, every Apple device sold will have net zero climate impact.

This includes transitioning all of its European-based suppliers to renewable power.

Apple launched a programme in October 2015 to help suppliers reduce their energy use and transition to 100 percent renewable electricity.

Since its launch, 72 manufacturing partners in 17 different countries have committed to 100 percent renewable energy for Apple production.

Once all of Apple’s supplier projects are completed, these commitments will avoid over 14.3 million metric tons of CO2e annually — the equivalent of taking more than 3 million cars off the road each year.

Henkel and tesa SE, also based in Germany, DSM Engineering Materials based in the Netherlands, STMicroelectronics based in Switzerland, and Solvay based in Belgium are also working toward clean energy solutions.

These solutions include DSM’s wind power purchase agreement in the Netherlands and STMicroelectronics’s solar carport in Morocco.

Meanwhile, Solvay is expanding its use of renewable energy to its broader operations after joining Apple’s Supplier Clean Energy Program five years ago.

The Esbjerg wind project follows the recent completion of one of Scandinavia’s largest solar arrays, located in Thisted, Northern Jutland. 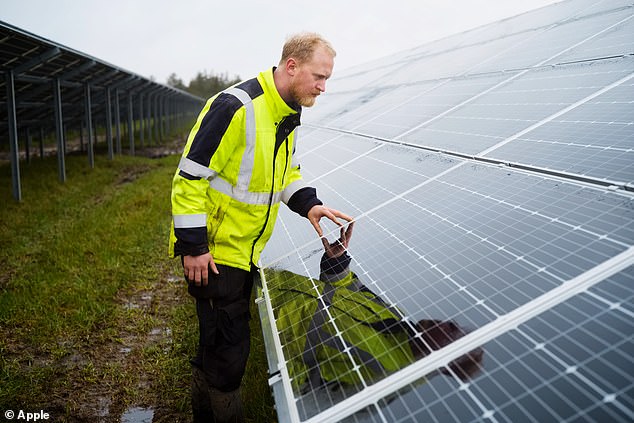 One of Scandinavia’s largest solar arrays was completed earlier this summer to power Apple’s Viborg data center, and is the first Danish solar project built without the use of public subsidies

This is the first Danish solar project built without the use of public subsidies, and also provides power to Apple’s newly completed data centre in Viborg, which offers network support and data storage to its users across the region.

It had over 600 specialist workers on site each day during construction and included many Danish businesses supporting its development.

It is now run by a team of data specialists, technicians, maintenance, and security staff, many of whom were recruited from the local area. 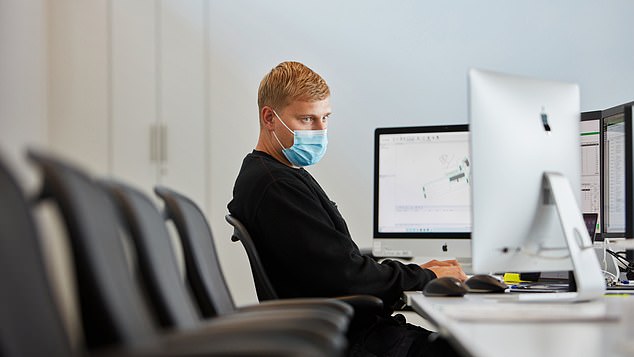 The Viborg data is now run by a team of data specialists, technicians, maintenance, and security staff, many of whom were recruited from the local area

Apple’s plan contrasts with other companies such as Microsoft, which pledged earlier this year to become carbon negative by removing more carbon from the atmosphere than it emits by 2030

The company said it would invest $1 billion over the next four years in engineering-based carbon removal technologies.

By 2050, Microsoft will also remove from the environment all the carbon the company has emitted either directly or by electrical consumption since it was founded in 1975.

Meanwhile Amazon has a target of 2040 to become carbon neutral, while Google, which relies on wind power to support operations at its data centres, has already been carbon neutral for 12 years.