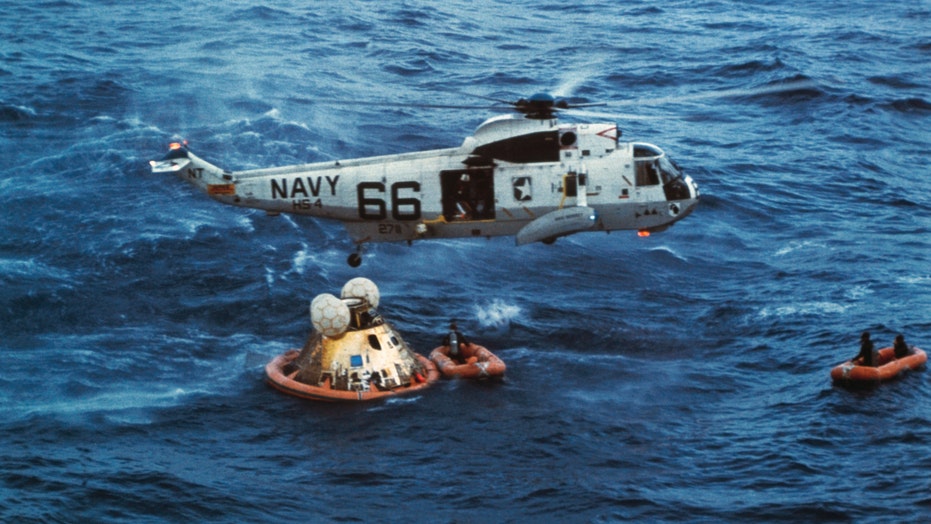 America celebrates the 50th anniversary of the moon landing

On July 24, 1969, Dick Powers was a 23-year-old Navy lieutenant on the Apollo 11 Recovery ship USS Hornet. Picked by the carrier’s captain to serve as the aide to President Nixon, Powers recounts the events of the remarkable day when the Apollo 11 astronauts returned to Earth.

“Our ship, the USS Hornet, had just got back from Vietnam – we had been back for about a month and we got picked to do Apollo 11,” he told Fox News. “We all started to realize the magnitude of what it was, everybody got into it.”

Powers, who had been in the Navy for about three years, was the ship’s Chief Financial Officer at the time of the recovery mission off Samoa. Nixon, he explained, arrived on the ship early on the morning of July 24 and stayed on the Admiral’s bridge for most of the day.

“There was a lot going on, we’re getting in position, we were waiting for the capsule to come down,” he said. 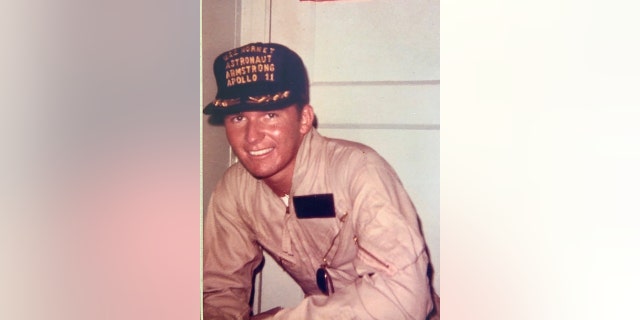 Dick Powers, who at the time was a 23-year-old U.S. Navy lieutenant, pictured wearing a baseball cap that was to be presented to the Apollo 11 astronauts. (Dick Powers)

“We were looking out into the gray sky as it tracked this beautiful arc across the horizon – it was absolutely incredible, when you think about it, how few people see that,” he added. “There I was, a 23-year-old kid, with President Nixon, watching.”

The President, according to Powers, was “getting really anxious” watching the astronauts make their dramatic return to Earth. 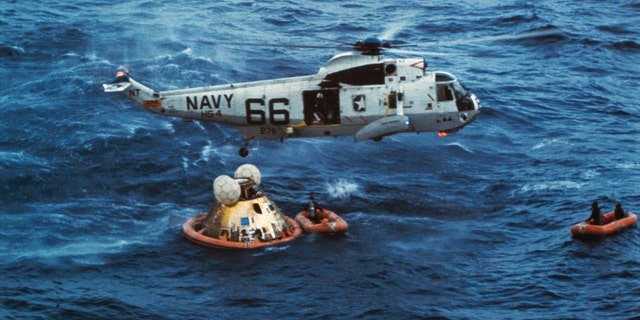 After opening the capsule’s hatch, the swimmers carefully helped Neil Armstrong, Buzz Aldrin and Michael Collins into rubber rafts. “It was very dicey, those waves were five or six feet tall,” said Powers. “By the time we got there, everything was taken care of.”

The splashdown miles away from the USS Hornet was not the only issue the ship’s crew had to deal with during the recovery mission. “8 pm the night before, all our communications went down – think about that, we’re in the middle of the Pacific,” Powers explained. “We had a lot of challenges during that period of time.”

The next day’s recovery, however, went off without any hitches and a helicopter brought the astronauts back to the Hornet’s flight deck, where they received a rapturous reception from the assembled crewmembers and NASA personnel.

“We saw them come out of the helicopters, it was amazing to see the three of them,” Powers recalled. 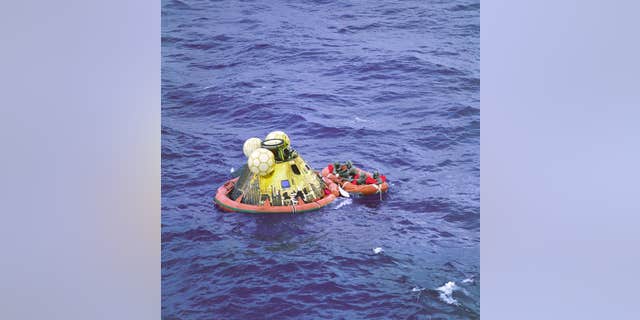 The Apollo 11 crew await pickup by a helicopter from the USS Hornet – all four men pictured are wearing biological isolation garments. (NASA)

Scientists were concerned that Armstrong, Aldrin and Collins may have brought pathogens back from the Moon with them, so they quickly entered a Mobile Quarantine Facility (MQF), a converted Airstream trailer.

Powers, however, had a few stressful moments just before Nixon went down to speak to the Apollo 11 crew in their quarantine unit.

“I had in my possession the three baseball caps for Armstrong, Aldrin and Collins that President Nixon was going to give to them,” he told Fox News, explaining that that night before, he and some of his crewmates had their photos taken with the caps.

When the astronauts were brought back to the ship, Powers went to his room to get the baseball caps. “I go down, into my stateroom, to the top of my desk, and the hats are gone!” he said. “I tear my room apart and I say to myself ‘I am holding up the President of the United States on national television because I have lost the baseball hats!’ – I cannot tell you what was going through my mind.” 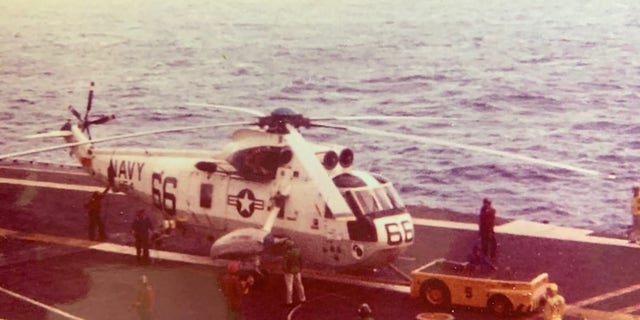 The helicopter bringing the Apollo 11 astronauts back to the USS Hornet.
(Dick Powers)

“I open my door and go back upstairs and there is my room-mate laughing, saying ‘I think you’re looking for these!’”

The president, according to Powers, was thrilled with the successful end to the incredible mission. “He was jubilant,” he said. “Richard Nixon talked about the Apollo 11 Moonshot and recovery as the best week in the history of the world.”

The young lieutenant found the 37th president extremely friendly. “He was a naval officer during World War II,” he said.  “He walked on the bridge and said ‘I’m President Nixon – what’s your name and where are you from, lieutenant?’”

“He was very nice to me, amazingly down to earth and incredibly warm,” he said. 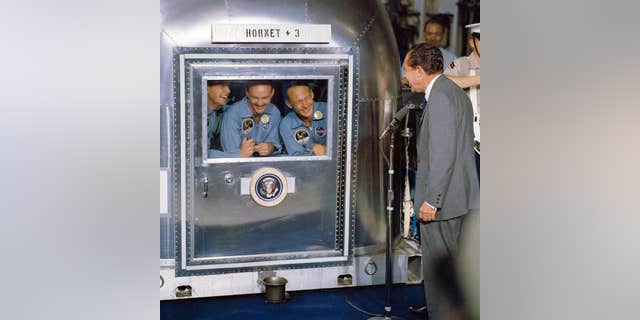 President Nixon talks to the Apollo 11 astronauts in their Mobile Quarantine Facility (MQF) on the USS Hornet. (NASA)

Opting not to do a tour of the ship prior to the astronaut’s splashdown, Nixon did not want to take any attention away from Armstrong, Aldrin and Collins on their historic day. “It’s all about them, it’s not about me,” he said.

Powers’ active duty in the Navy ended in 1970, about a year after the Apollo 11 recovery mission and after the USS Hornet had recovered Apollo 12. After business school, he went on to enjoy a career on Wall Street. 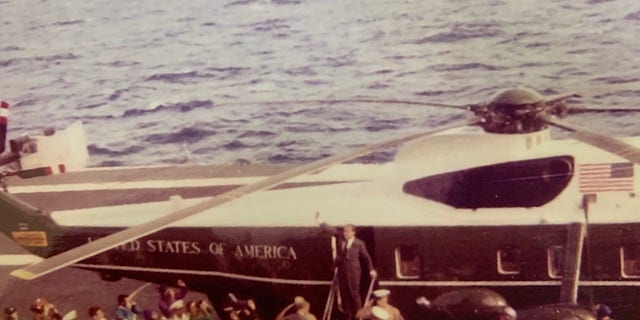 However, he recalls the events of July 24, 1969, as one of the highlights of his life. “That was the day, at the age of 23, I came to face-to-face with the definition of excellence,” he said. “[Apollo 11] represents, to me, the essence of American exceptionalism.”

Be sure to catch the America’s News HQ Apollo 11 50th anniversary special on Fox News on Saturday, July 20 at 12 PM EDT.