Antarctica: Melting ice would be ‘serious’ for London warns scientist

Researchers have identified cracks growing across Antarctica’s Brunt Ice Shelf and are warning that it will soon release an iceberg with an area twice the size of New York. It is not yet clear how the remaining ice shelf will respond following the break, posing an uncertain future for scientific infrastructure and human presence on the shelf. The growing cracks of this “anomaly” have prompted safety concerns for people working on it, particularly researchers at the British Antarctic Survey’s (BAS) Halley Station.

This major base for Earth, atmospheric, and space science research typically operates year-round but has been closed down twice in recent years due to unpredictable changes in the ice.

And YouTube channel ‘Destiny’ revealed how the threat is not just limited to the icy continent during their ‘Strange anomaly in Antarctica’ series.

The narrator said: “One of the defining characteristics of West Antarctica is most of the ice sheet is grounded on a bed that lies below sea level.

“When the ice sheet is attached to the bed below sea level, ocean currents can deliver warm water to its grounding lines – the location where the ice sheet attaches to the bed. 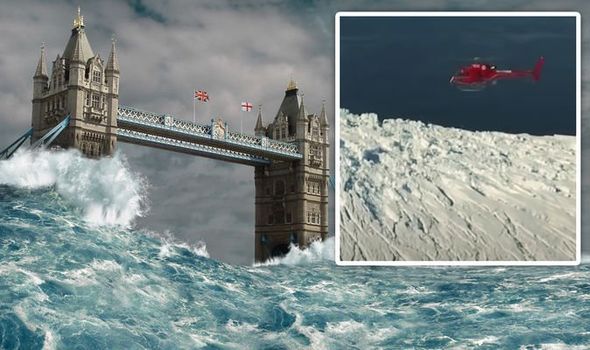 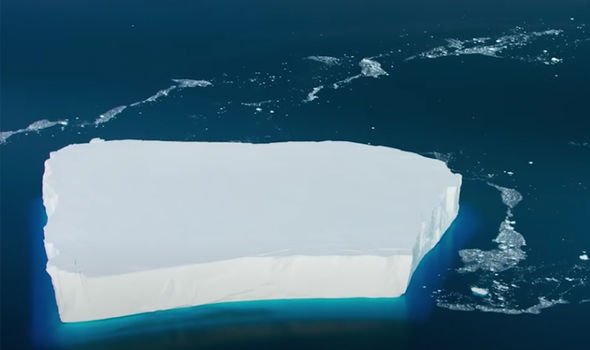 “In some spots, the bed lies more than a mile-and-a-half below sea level.

“When these grounding lines start to retreat, ocean waters can infiltrate between the ice and cause the ice sheet to float away.

“Scientists recognised that this is the first step in a potential chain reaction.”

The series went on to explain how large sections of ice can break off from the mainland and why that is a concern to experts.

It added: “Ocean heat eats away at the ice, the grounding line retreats inland and ice shelves lose mass. 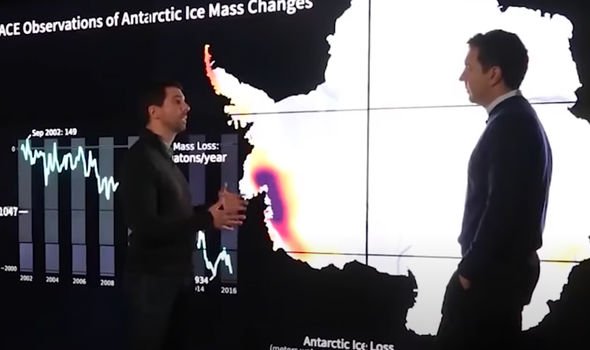 “In this push and pull, sudden fractures can occur, leading to massive breakages of icebergs like the one currently taking place in the Brunt Ice shelf.

“Once it breaks away from the parent mass, it becomes more exposed to warmer ocean currents and melts faster

“As more ice flows into the ocean every year, it leads to a rise in global sea levels – the biggest fear among scientists.

“The most recent UN Intergovernmental Panel On Climate Change (IPCC) report estimated that by 2100 sea levels will rise between one and three feet.”

The documentary also explained how predictions have not accounted for such large icebergs. 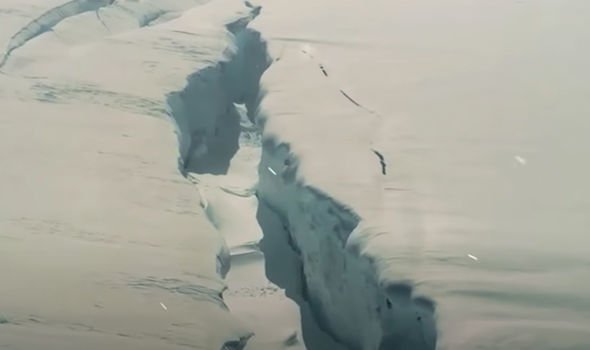 It continued: “But this projection does not take into account the possibility of major ice loss in the form of breakages.

“The existing coastlines of our present continents will be completely unrecognisable if the whole of Antarctica melted.”

In a chilling reminder to the consequences of melting sea ice, the narrator sent a warning to several countries. 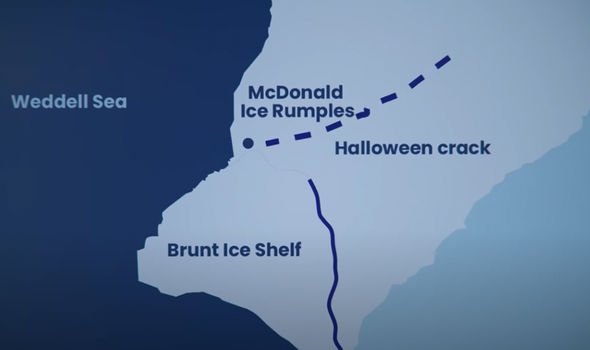 He added: “It would raise the sea level by 216 feet – the entire Atlantic seaboard would vanish along with Florida.

“San Francisco’s hills would become a cluster of islands.

“In Egypt, Alexandria and Cairo would be swamped by the intruding Mediterranean.

“In Europe, London would be completely swallowed underwater, Venice reclaimed by the Adriatic Sea and most of Denmark would be gone.”