Amazing animation shows how a small NASA rocket will lift off from the surface of Mars in 2028, bringing pieces of the Red Planet back to Earth for scientists to study

In 2028, a NASA rocket will lift off, taking a payload of rocks into orbit, and send them on a 40 million-mile journey – from Mars to Earth.

It will be the first time a rocket has lifted off from a planet other than Earth. The rocket will return samples of the Red Planet currently being collected by Perseverance, and the process has been revealed in a new NASA animation.

The Mars Sample Return mission is a joint project of NASA and the European Space Agency (ESA), which is building a small ‘fetch’ rover to gather the collected samples.

The US space agency says this would be the first robotic round-trip to bring samples safety to Earth, and a step towards humans landing on the Red Planet in the 2030s.

In a new animation, a small rocket, the Mars Ascent Vehicle (MAV), a $194 million light weight launcher, can be seen taking off from a lander on the surface of Mars, and docking with a spaceship in Martian orbit for return to Earth.

NASA says this is a major milestone in the goal of sending humans to the surface of Mars in the 2030s, and returning them back to the Earth. 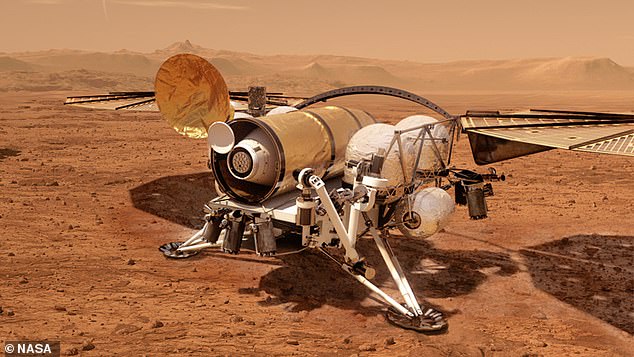 In 2028 a NASA rocket will lift off, taking a payload of rocks into orbit, and send them on a 40 million mile journey to a distant world – from Mars to the Earth

Since it arrived on Mars in February 2021, the NASA Perseverance rover has been trundling through the Jezero Crater taking samples of various rocks.

Each sample is stored away in a titanium tube, and in the coming decade, these will be gathered up by a new rover, set to land in 2028, known as Fetch.

This is being built by the European Space Agency (ESA), assembled in Stevenage, Hertfordshire by Airbus – and will launch along with a lander and the MAV.

The agency tweeted: ‘NASA’s first rocket launch from another planet is now one step closer. @LockheedMartin has been tapped to build the Mars Ascent Vehicle (MAV), part of a multi-mission campaign to return samples of the Red Planet to Earth.’

Its not an easy process though, with NASA saying that to bring samples of rock back from Mars, it will require a multi-agency and multi-national level of cooperation.

There are also a number of devices and vehicles involved in the process, including the Sample Retrieval Lander, which will carry the MAV to the surface of Mars. 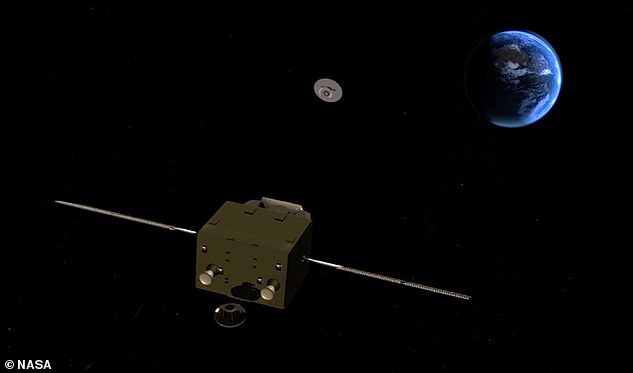 The Mars Sample Return mission is a joint project of NASA and the European Space Agency (ESA), which is building a small ‘fetch’ rover to gather the collected samples 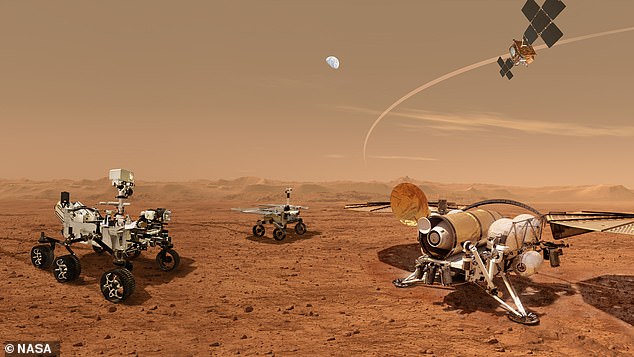 It will be the first time a rocket has lifted off from a planet other than Earth, and will return samples of the Red Planet currently being collected by Perseverance

This platform will land near or in the Jezero Crater, a dried up river delta where Perseverance is based, and near where it has dropped samples of rock in tubes.

Fetch rover, built by ESA, will then be deployed to collect the tubes, in what can be likened to an interplanetary treasure hunt.

It will return to the lander platform and load them into a single large canister on the MAV – which will then perform the first liftoff from Mars to enter Mars orbit.

‘This groundbreaking endeavor is destined to inspire the world when the first robotic round-trip mission retrieves a sample from another planet,’ said NASA Administrator Bill Nelson.

He added that this would also be ‘a significant step that will ultimately help send the first astronauts to Mars’ in the coming decades.

Once it reaches Mars orbit, the container would be captured by an ESA Earth Return Orbiter spacecraft with NASA’s Capture, Containment, and Return System payload.

The spacecraft would bring the samples to Earth safely and securely in the early- to mid-2030s – shortly before a human crew is predicted to launch for Mars.

‘Committing to the Mars Ascent Vehicle represents an early and concrete step to hammer out the details of this ambitious project not just to land on Mars, but to take off from it,’ said Thomas Zurbuchen, the associate administrator for science at NASA. 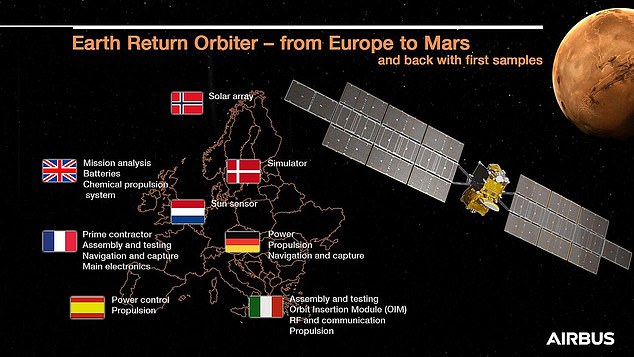 The US space agency says this would be the first robotic round-trip to bring samples safety to Earth, and a step towards humans landing on the Red Planet in the 2030s

Launch: Opportunities in the mid to late 2020s

Length of Missions: Return to Earth planned for early 2030s

‘We are nearing the end of the conceptual phase for this Mars Sample Return mission, and the pieces are coming together to bring home the first samples from another planet.

‘Once on Earth, they can be studied by state-of-the-art tools too complex to transport into space.’

The MAV won’t be an easy project for Lockheed Martin, as it has to be robust enough to withstand the harsh Martian environment, adaptable enough to work with multiple different spacecraft, and small enough to fit inside the Sample Retrieval Lander.

The firm has to design, develop, test and evaluate the fully integrated MAV system, as well as develop the ground support equipment to operate it from Earth.

NASA has a budget of $194 million for the entire Mars Ascent Vehicle Integrated System (MAVIS), including the ascent vehicle itself, and work to make it operate.

‘NASA’s Mars Sample Return Campaign promises to revolutionize our understanding of Mars by bringing scientifically selected samples for study using the most sophisticated instruments around the world,’ said NASA.

‘The campaign would fulfill a solar system exploration goal, a high priority since the 1970s and in the last two National Academy of Sciences Planetary Decadal Surveys.’

This lander is expected to launch no earlier than 2026 from the Kennedy Space Center in Florida, complete with the MAV and Fetch rover.