‘Penis worms’ that were among Earth’s most fearsome creatures 500 million years ago used other creatures’ shells to protect themselves just like hermit crabs do today, study reveals

Hermit crabs were far from the first to call other creatures’ discarded shells their own — fearsome ‘penis worms’ did the same thing 500 million years ago, a study found.

The Guanshan deposits are famous because they preserve not only shell material, but also the soft tissues that would commonly be lost from the fossil record.

Four of the phallic creatures — properly known as priapulid worms — were found preserved residing within the conical shells of hyoliths, a long-extinct fossil group.

Having eliminated other explanations, the team concluded that the ancient worms were forced to take shelter to avoid predators, a conclusion they called ‘surprising’.

The worms from the Guanshan biota lived not long after the ‘Cambrian Explosion’, a time which saw the rapid diversification and complication of animal life.

According to the researchers, the findings highlight how key predation was in shaping the ecology and behaviour of animals at this key point in their history.

Hermiting behaviour has never been observed in modern priapulid worms. 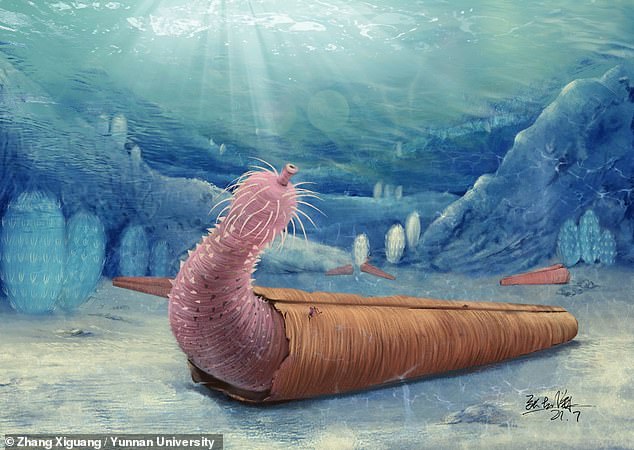 Hermit crabs weren’t the first to call other creatures’ discarded shells their own — fearsome ‘ penis worms ‘ did the same thing 500 million years ago, a study has found. Pictured: an artist’s impression of a priapulid worm squatting in the discarded conical shell of a hyolith 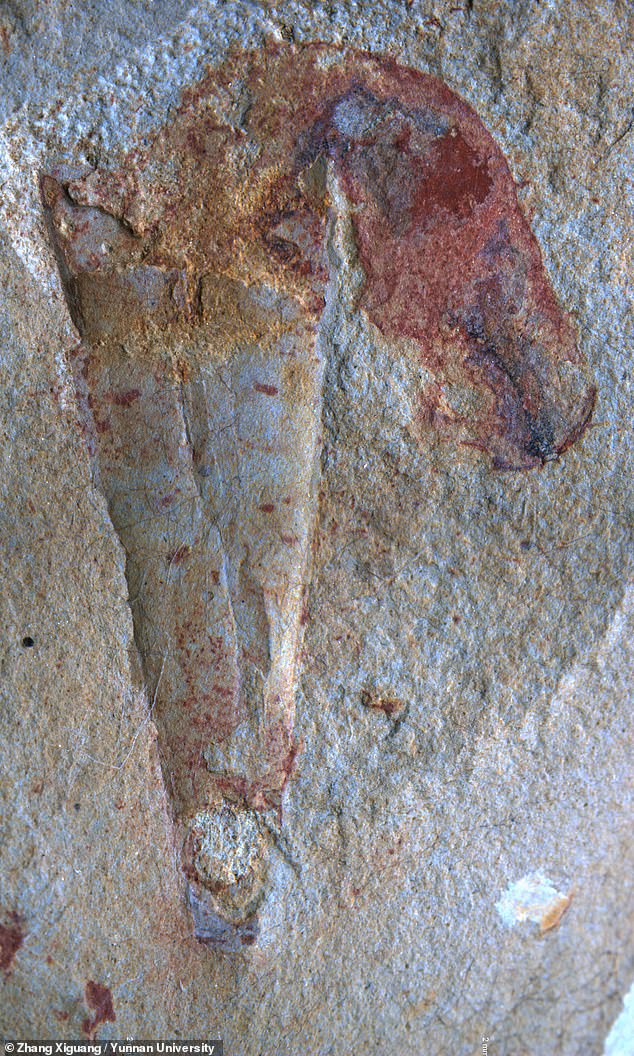 The Guanshan deposits studied by the team are famous because they preserve not only shell material, but also the soft tissues that would commonly be lost from the fossil record. Pictured: a fossil of a priapulid worm (top) poking out of the shell of a hyolith

The priapulids — or ‘penis worms’ — are a phylum of unsegmented marine worms that first evolved some 500 million years ago during the Cambrian.

During this period, they were thought to have been fearsome predators, although the new study shows they were also likely prey in turn.

Some 20 species survive today. They are known to live in mud at relatively shallow depths of up to 300 feet.

The fossil priapulids studied by Dr Smith and colleagues ranged in length from 0.4–0.7 inches.

According to the researchers, each worm and the shell it inhabited corresponded in size — and no worm was found preserved without a shell — suggesting a biological association between the two.

‘The worms are always sitting snugly within these same types of shells, in the same position and orientation,’ explained paper author and palaeontologist Martin Smith of the University of Durham.

‘The only explanation that made sense was that these shells were their homes —something that came as a real surprise.

‘Not long before these organisms existed, there was nothing alive more complex than seaweeds or jellyfish,’ he continued.

‘So it’s mind-boggling that we start to see the complex and dangerous ecologies usually associated with much younger geological periods so soon after the first complex animals arrive on the scene.’

The researchers also considered other explanations for the association between the worms and the shells — such as that the worms used the shells as temporary protection from the hostile conditions that buried and preserved them.

In addition, the team noted, evidence of emergency sheltering behaviour was not seen among the fossils of the other creatures in the same deposits.

The ‘hermiting’ lifestyle is known to have evolved in a diverse range of animal lineages — including not only hermit crabs but also the shrimp-like tanaids and both fauveliopsid and sipunculan worms.

Despite the broad distribution of this practice across the tree of life, however, it had never previously been seen in any organism living before 170 million years ago, during the so-called Mesozoic Marine Revolution.

Beginning some 210 million years ago, this ecological ‘arms race’ saw sea creatures develop adaptations against the evolution of shell-crushing and -boring predators. 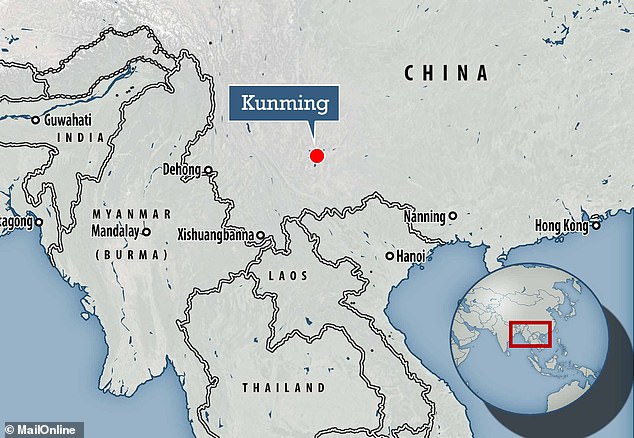 WHAT WAS THE ‘CAMBRIAN EXPLOSION’?

Scientists have long speculated that a large oxygen spike during the ‘Cambrian Explosion’ was key to the development of many animal species.

The Cambrian Explosion, around 541 million years ago, was a period when a wide variety of animals burst onto the evolutionary scene.

Before about 580 million years ago, most organisms were simple, composed of individual cells occasionally organised into colonies.

Over the following 70 or 80 million years, the rate of evolution accelerated and the diversity of life began to resemble that of today.

It ended with the Cambrian-Ordovician extinction event, approximately 488 million years ago.