The most extensive study of ancient dog DNA to date has shown how rapidly dogs spread across the world after domestication, and pins their likely origin to a group of extinct wolves.

The new report in the journal Science pushes ancient DNA studies of dogs to a new level, but raises as many questions as it answers. Until Thursday, scientists had published the genomes of only six ancient dogs and wolves. Now an international team of researchers has sequenced and analyzed an additional 27 genomes of ancient dogs.

David Reich, at Harvard University, who specializes in using ancient human DNA to understand migrations and population change, said the new research, “for the first time brings ancient DNA analysis of dogs to the kind of sophistication that exists with studies of humans” and other animals.

Among the new and sometimes puzzling findings:

By 11,000 years ago, dogs had already diverged into five different lineages and spread worldwide. It is widely accepted that dogs were domesticated at least 15,000 years ago. The new study suggests, but doesn’t prove, that domestication probably began around 20,000 years ago.

Dogs probably evolved from an extinct form of wolf, yet to be identified. There is some disagreement among experts about the strength of this finding.

Ancient dogs were much more diverse genetically than modern dogs. Four thousand years ago, European dogs had a wide genetic diversity that disappeared long before the Victorians started creating new breeds. All European dogs appear to have descended from one group of ancient European dogs, and the great modern diversity of dog shapes and sizes indicates an emphasis by breeders on certain very powerful genes.

Dogs are a continuation of a line of wolves, but since those wolves became dogs more than 15,000 years ago, no new wolf DNA has entered dog genomes. This puzzles researchers because humans crossbred dogs and wolves, but none of the wolf DNA survived in dogs at large. Modern wolves, however, do show the incorporation of some dog DNA.

The geographic spread of dogs sometimes mirrors and sometimes diverges from human migration, leaving unanswered the effects of dog-trading and why the genes of particular populations of dogs sometimes extended and other times did not.

As for mapping clear, definitive timelines for when, where and how dogs were domesticated, the researchers said they continue to make some progress.

The report involved a collaboration among many scientists, including Greger Larson at the University of Oxford, Pontus Skoglund and Anders Bergstrom at the Francis Crick Institute in London, and Laurent Frantz at Queen Mary University of London. 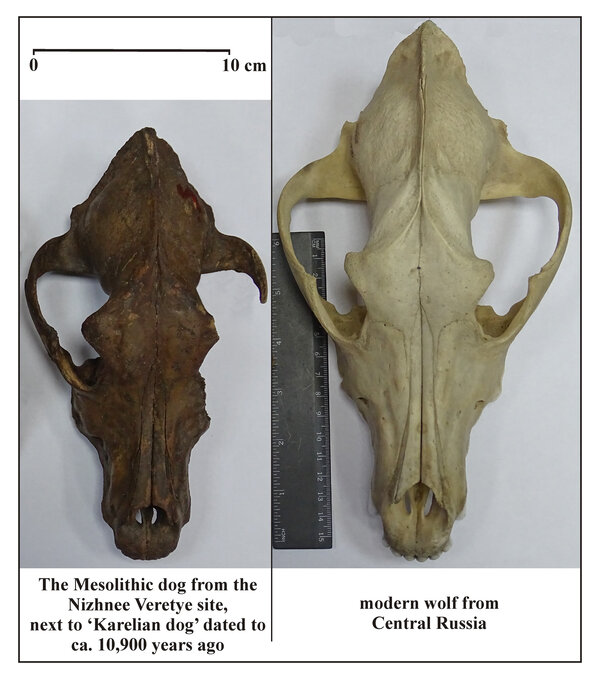 The extraordinarily rich amount of information gathered from the 27 genomes provided many new perspectives on dog domestication and their association with humans. And, perhaps not surprisingly, interpretations of the findings varied.

Dr. Reich, for example, described the new paper as “important and exciting,” and said that it “nailed” the single origin of dogs from one extinct wolf population. He also considered the research “a very strong refutation” of an earlier paper on which Dr. Larson and Dr. Frantz were authors that suggested two or more instances of domestication.

“Nope!” Dr. Larson wrote in an email. “The needle has been pushed toward single,” he said, since the new data is consistent with that idea. But there are still gaps in the available ancient genomes, so other possibilities remain.

Dr. Skoglund said, “We cannot exclude that some of the dogs could have partially different origins/domestications (it is hard to exclude), but we see no evidence of it at the moment.”

Among the other findings, Dr. Larson said he found it particularly intriguing that once dogs had become domesticated, and even while they were sometimes breeding with wolves, no new wolf DNA entered their genomes.

By contrast, pigs, for example, were brought to Europe by farmers from Anatolia. But the genes of those first domesticated pigs have been completely lost, replaced by the genes of wild European boars, even though the pigs stayed domesticated animals.

While dogs do interbreed, no new wolf genes survive over the years. One possibility, Dr. Larson said, is that “wolfiness” just doesn’t fit with an animal as close to people as a dog. Pigs can be a little wild but “if you’re a dog and you’ve got a little bit of wolf in you, that’s not a good thing and those things get knocked on the head very quickly or run away or disappear but they don’t get integrated into the dog population.”

Dr. Skoglund said another intriguing and unexplained finding from the genome data was how fast dogs spread around the globe, and diversified, so that by 11,000 years ago, not only were there five distinct lineages, but some fossil DNA also showed that those lineages had begun to recombine.

“How did that happen?” he said. “In ancient humans, we don’t really know of any human expansion that would have facilitated this, on the order of 15 to 30,000 years ago.”

In the past 11,000 years, he said, the dog genomes showed the evidence similar to that in human genomes of Anatolian farmers moving into Europe. But then there was the sudden loss of diversity in dogs starting around 4,000 years ago.

In Africa, ancient dogs were descended from dogs from the Middle East. But that did not parallel any human migration. The Basenji breed still has the majority of its ancestry from these Middle Eastern dogs.

More research is coming on ancient dogs in Eurasia and the Americas, and on ancient wolves, the researchers said.

The exact where and when of dog domestication remain unclear, and will never be pinned down to the kind of moment in time that dog owners like to imagine, but, in terms of a period of time and geographic area, Dr. Larson said, “We’re getting closer.”